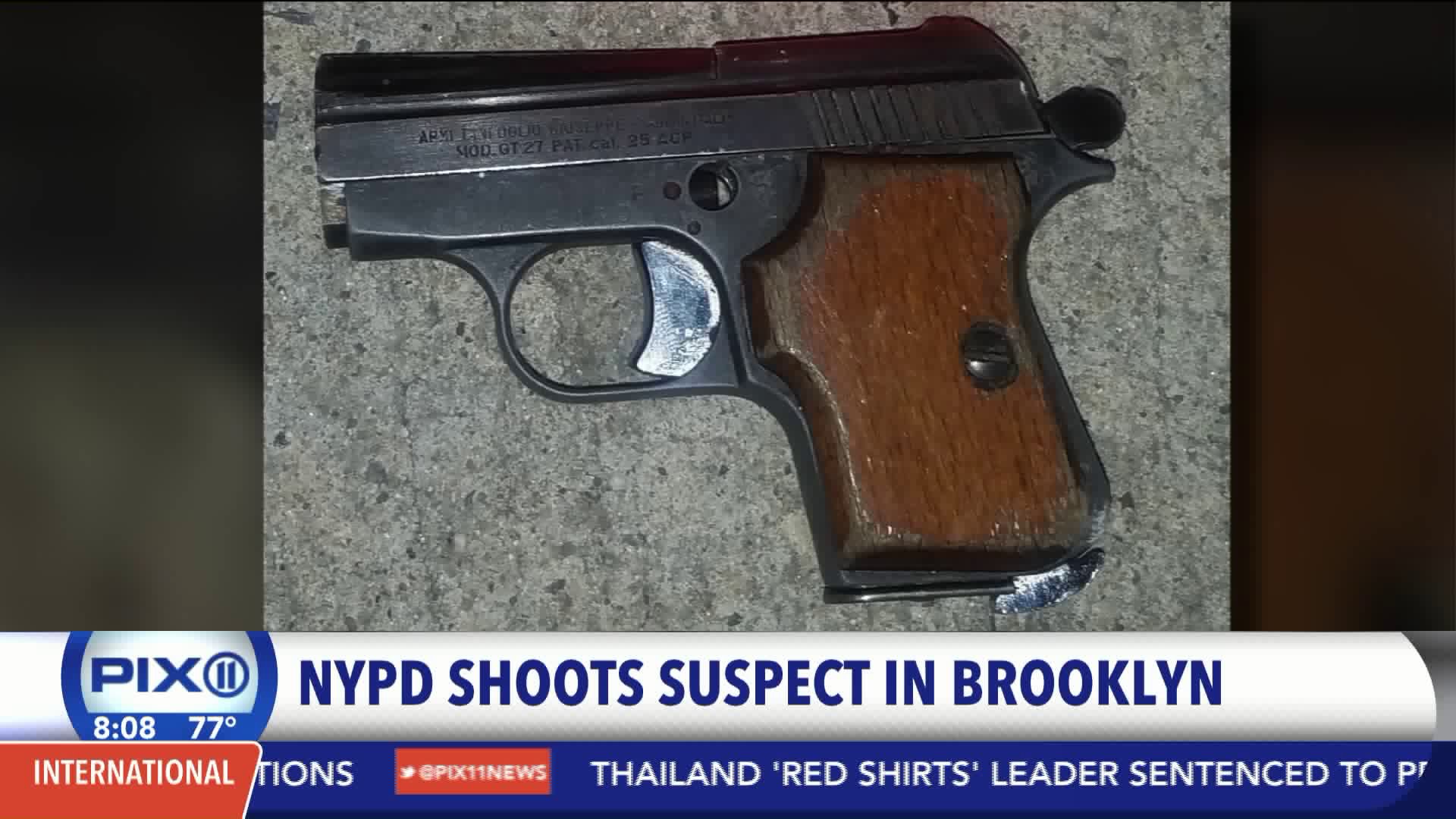 NYPD Assistant Chief Jeffrey Maddrey said it happened at around 1:30 a.m. when three members – a sergeant and two officers – from the Brooklyn North Gang Unit were in patrol in the vicinity of St. John's Place and Rochester Avenue in the Crown Heights section of the borough.

The three officers were on duty in an unmarked duty in plainclothes when they heard shots being fired in the area of Rochester Avenue between Park Place and Sterling Place, which was a block away from where the cops were, Maddrey said.

The NYPD's Brooklyn North Twitter account tweeted the image of the .25 caliber gun recovered in the police-involved shooting on July 21, 2017.

They drove over the area where the shots were fired and saw a man running southbound on Rochester Avenue, making a right on Sterling Place. The officers saw another man running behind him with a firearm chasing after the male, police said. When the gunman reached the corner of Sterling Place and Rochester Avenue, he fired his gun at the other man and continued to run in the direction of the officers, unaware of their presence, Maddrey said.

The officers exited their vehicle and told the gunman not to move, but those commands were ignored and he continued to run toward them, police said.

The sergeant inside the vehicle left the car and discharged his weapon at least two times, striking the male one time in the left thigh, according to Maddrey.

The gunman still continued to run southbound on Rochester Avenue and discarded his weapon until he collapsed 1525 St. John's Place, police said.

Maddrey said the officers were able to apprehend him and recovered his .25 caliber pistol. He was then taken to a hospital with non life-threatening injuries.

The officers were not injured but were taken to a hospital for observation.

Maddrey said the perpetrator is 20 years old and is known to the NYPD. He has at least seven previous arrests, including a gun charge.

"The police told me that my son is under arrest because he has a warrant but I come here it's totally different," Akia Langhorn said. "I found my son got shot. But all I know it's a lie. The truth here is my son got shot by a police officer."

Crown Heights resident Abu Sakher was sleeping in his second floor bedroom on St. John's Place when he awoke to his window shattering. He looked out the window and saw police lights, realizing it was from a bullet fired before or after the police-involved shooting.

"We heard something hit the wall but I didn't realize what it was," Sakher said. "When we wake up this morning we saw the bullet holes in the house and we got the bullet."

No one was hurt inside his apartment above his shop, according to Sakher.

The NYPD recovered the bullet and will analyze it to see if it came from police or the armed man.

Overall, the NYPD's 77th Precinct has experienced a drop in shootings, according to Maddrey, but he says it still has ways in go.

"The 77 Precinct is down in crime but every precinct has its challenges," Maddrey said.