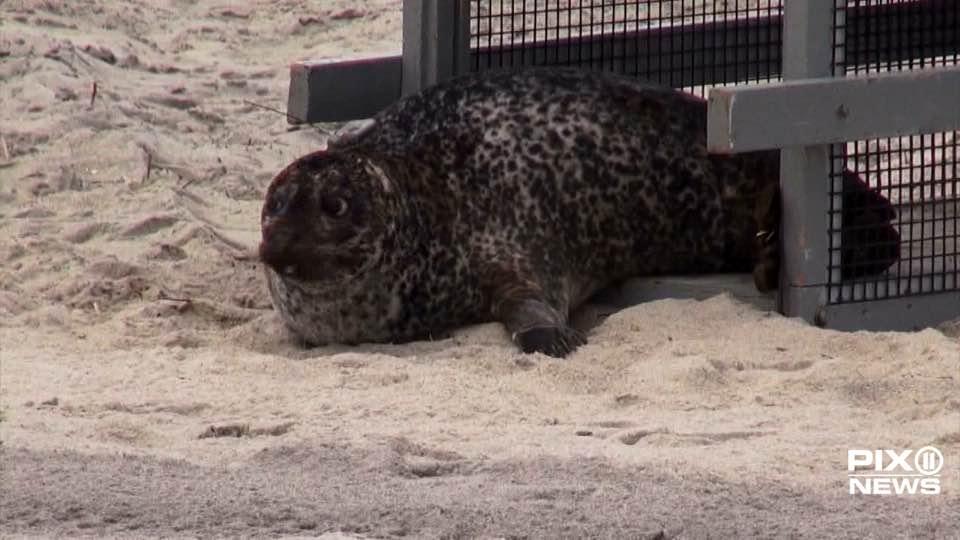 SANDY HOOK, N.J. —  Phil, an adult harbor seal, was slow to come out of his cage as dozens of onlookers lined the beach. Phil was discovered in a muddy lake 12 miles inland in Delaware, suffering from an infection in both eyes. He was underweight and severely dehydrated. On April 11, he was taken in for rehabilitation by the National Aquarium in Baltimore, Maryland.

Phil was released back into the wild on Monday with a satellite transmitter on his back.

"Given Phil's out-of-habitat situation which led him to rehab, we just want to just monitor his location and make sure that's not a pattern of his," said Jennifer Dittmar, curator of Animal Rescue for the National Aquarium.

Phil eventually did waddle out of his cage, looked around and went head-first into the ocean.

“He inched his way out an took off for freedom," said Barbara Chase, who called her grandson to the beach to watch. "That was wonderful.”​

Seals live off the coast in New York and New Jersey from the spring until about December, when they head down to the Carolinas for the winter.

Phil is the 200th marine animal to be rehabilitated and released by the National Aquarium. They specialize in seals and sea turtles.

“Most of seals that we're gonna see on the beaches are just healthy resting individuals," said Dittmar, adding that if you see a seal laying on the beach, you shouldn't get too close. She said allow the animal to relax, because he or she is probably just tired.

"If you have a concern about the animal you can report it to the local stranding response network."