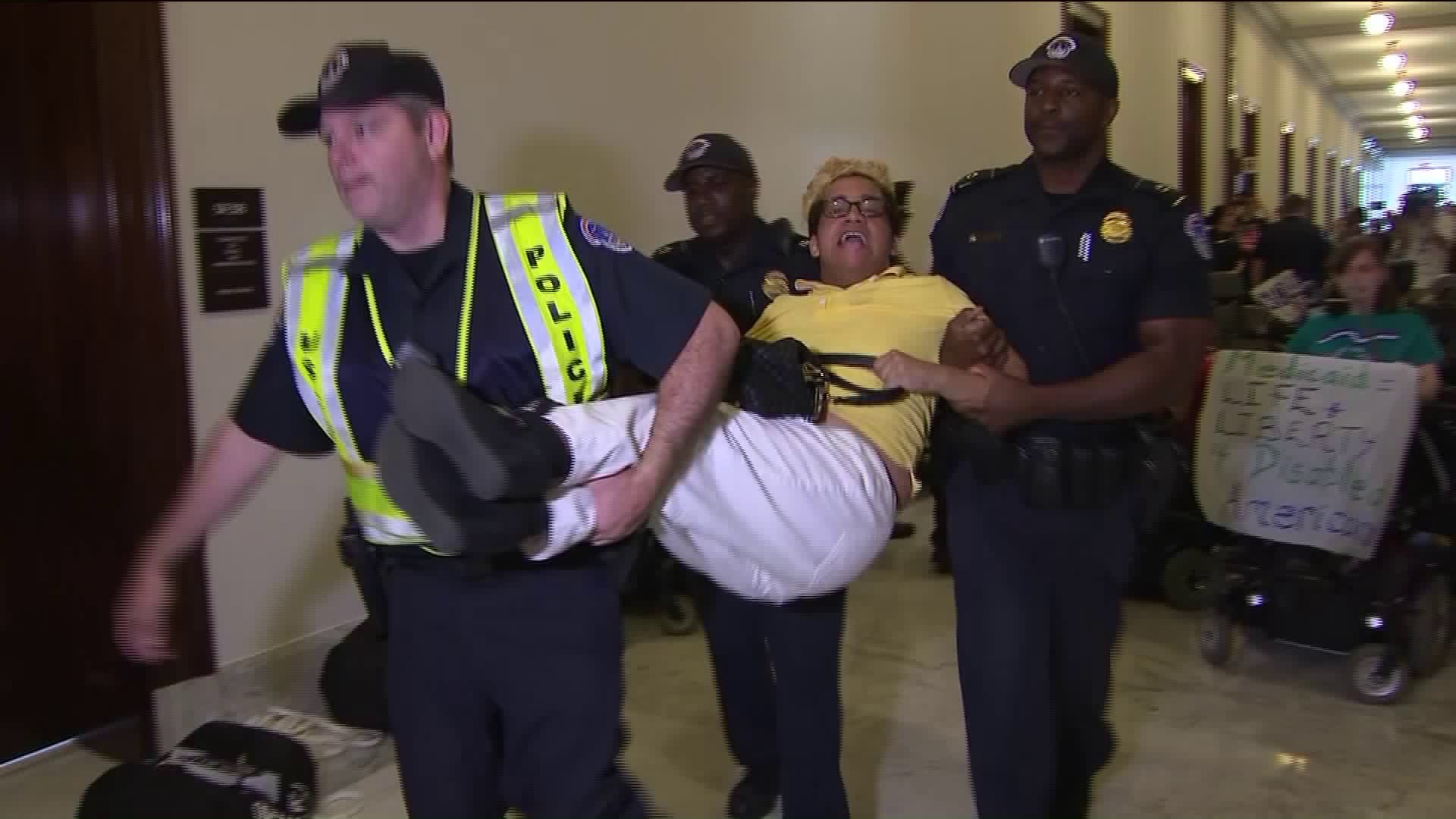 Senate Republicans hope to vote on the bill by the end of the month.

The 142-page draft of their bill would cut and revamp Medicaid, the health care program for lower-income and disabled people.

It would repeal tax increases Obama's law imposed on higher-income people and medical industry companies to pay for expanded coverage. And it would end the tax penalty Obama's statute imposes on people who don't buy insurance — in effect, ending the so-called individual mandate.

Majority Leader Mitch McConnell is hoping to push the measure through the Senate next week. But its fate remains uncertain.

It faces uniform Democratic opposition. And at least a half-dozen Republicans — both conservatives and moderates — have complained about it.

McConnell's decision to keep the details tightly under wraps until Thursday was intentional and aimed at winning over his colleagues out of the public spotlight, but the secretive process has infuriated Democrats -- and aggravated plenty of Republicans, too.

"I need the information to justify a 'yes' vote. I have a hard time believing that we would have that in such a short period of time," Sen. Ron Johnson, R-Wisconsin, told CNN on Wednesday.

McConnell has very little room for error -- he can only lose two Republican votes and still pass the bill.

President Donald Trump said Wednesday night he hopes to "surprise" with a plan that has "heart."

"I hope we are going to surprise with a really good plan," Trump said at a campaign rally in Cedar Rapids, Iowa. "You know I've been talking about a plan with heart. I said add some money to it. A plan with heart, but Obamacare is dead."

The House passed its version of health care reform last month, but while Republicans celebrated that bill with Trump at the White House, the President has since called it "mean."

Can McConnell get the votes?

Senior GOP senators were still putting final touches on the draft legislation on Wednesday, and it is still likely to change before any vote as members express their preferences.

Much like in the House, where moderate and conservative lawmakers were deeply divided on health care policy leading up to a vote in May, Senate Republicans also have clashing ideological views and priorities.

Some of the key issues that lawmakers are most concerned about include Medicaid reform, regulatory waivers, the state stability fund and tax credits. McConnell has a tough needle to thread: making significant concessions to conservatives risks losing moderate votes, and vice versa.

What will CBO say?

The legislation will also have to undergo parliamentary scrutiny to ensure that it meets the strict requirements on what can or can't be included in a bill under the budget reconciliation process.

One report that will inform Senate Republicans as they decide whether to support the bill will be a score from the Congressional Budget Office, expected to come out in the coming days.

The CBO analysis will shed light on how much money the bill would cost and how many people would be covered. Senate Republicans hope to see better headlines from this CBO report than the one that the House GOP legislation received. CBO said the House bill would result in 23 million fewer people insured in 2026 than under Obamacare.

What's in the bill and differences with the House

While the Senate bill is largely similar to the House passed-bill, there are some key differences.

Medicaid has been one of the central sticking points in the debate. The bill would continue the enhanced Medicaid expansion funding from Obamacare until 2021 and then phase it out over three years. This is a concession to moderates, who weren't pleased that the House version would end the enhanced support for new enrollees in 2020.

The Senate bill would also largely maintain Obamacare's premium subsidies structure, but tighten the eligibility criteria starting in 2020. Fewer middle class folks would get help because only those earning up to 350 percent of the poverty level would qualify, rather than the 400% threshold contained in Obamacare. But it would also open up the subsidies to enrollees below the poverty level so those living in states that didn't expand Medicaid could get some assistance.

Senators opted to keep Obamacare's subsidies to prevent the funds from being used for abortions. The House bill called for creating tax credits based largely on age, but adding abortion restrictions to these credits could have run afoul of Senate rules governing the bill. Still, the similarities to Obamacare will likely infuriate conservatives such as Kentucky Senator Rand Paul, who decried the House version as "Obamacare Lite."

Also, as in the House bill, it would defund Planned Parenthood for one year.

The bill would also aim to shore up the existing Obamacare market by allocating funds for the cost-sharing subsidies until 2019. This will placate insurers, who were distraught by Trump's refusal to commit to continue making these payments, leading many carriers to hike rates or drop out of the exchanges for 2018.