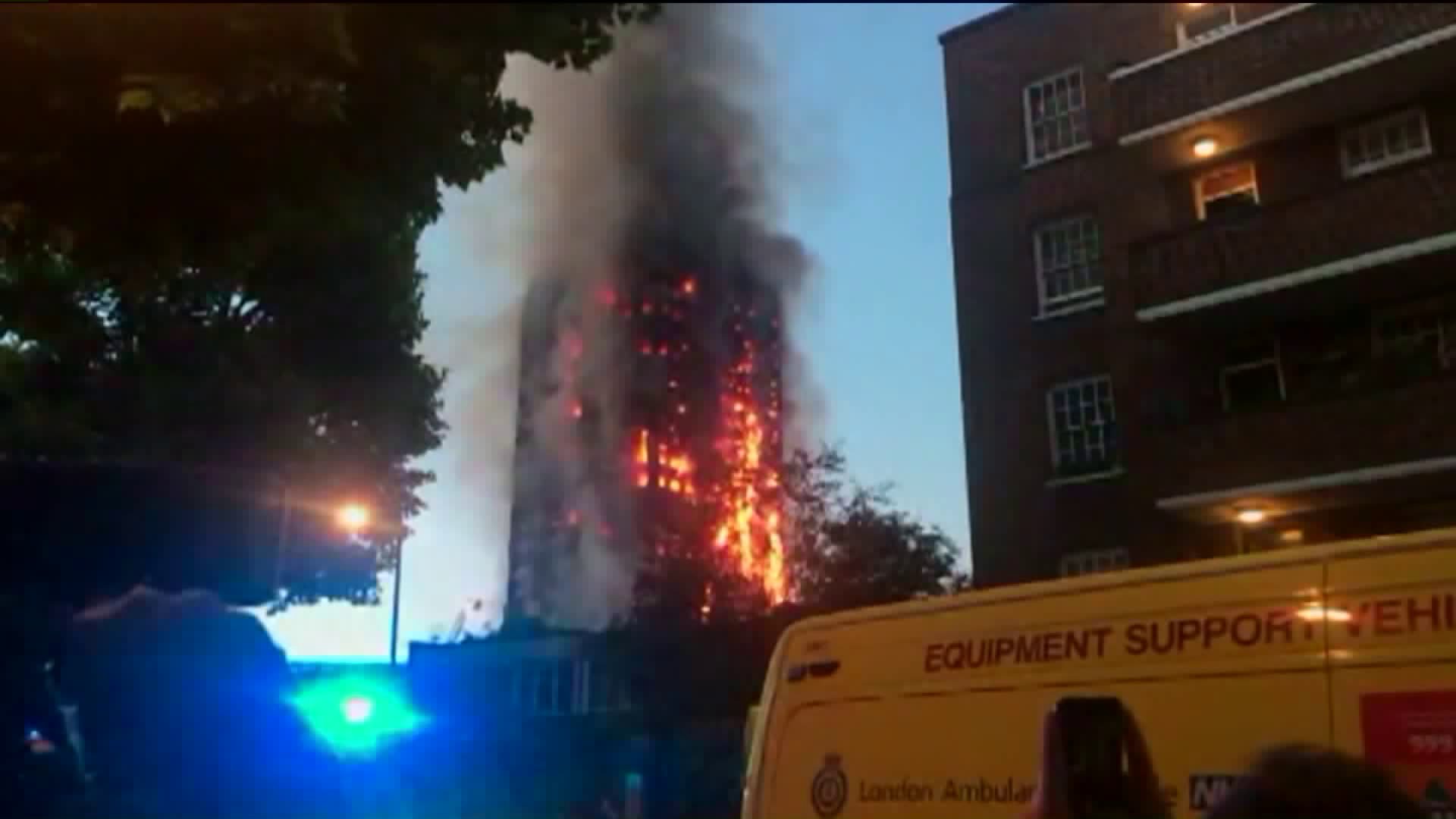 At least 12 people are dead and dozens injured after a massive fire rapidly tore through a 24-story apartment building in west London in the early hours of Wednesday, police said.

LONDON — At least 12 people are dead and dozens injured after a massive fire rapidly tore through a 24-story apartment building in west London in the early hours of Wednesday, police said.

All 24 floors of Grenfell Tower in North Kensington were swiftly engulfed, trapping residents in their homes and reportedly forcing some to jump to escape the flames. London's fire chief, Dany Cotton, said the blaze was "unprecedented" in her 29 years of service.

Residents had reported concerns about fire safety in recent years, and questions were raised about whether a recent refurbishment of the building, in which exterior cladding was installed, contributed to the rapid spread of the fire.

Firefighters continued to search the building for survivors.

-- 78 people were hospitalized, 18 of whom are in critical care.

-- Police warn the death toll will rise and no more survivors expected.

-- London Fire Brigade says it has rescued 65 people from the tower.

-- Residents say they were told to stay in their apartments as the fire raged.

-- 125 families live in the building, which also houses a children's nursery.

Around 200 firefighters, 40 fire trucks and 20 ambulance crews were at the scene at the height of the blaze.

"Sadly I can confirm there are now 12 people that have died that we know of. This is going to be a long and complex recovery operation and I do anticipate that the number of fatalities will sadly increase beyond those 12," London Metropolitan Police Commander Stuart Cundy told reporters in the early evening.

"I don't anticipate there will be further survivors."

The London Fire Brigade said it had rescued 65 people from the building and had now reached all 24 floors, though firefighters were yet to extinguish small flames in hard to reach pockets. It is unclear how many people are still unaccounted for.

Witnesses described people leaping from the building and of trapped children banging on windows as the fire broke out at around 1 a.m. local time, while people slept.

A website run by the "Grenfell Action Group" said residents of the tower had expressed concerns over the safety of the building, specifically pointing to fire risks. Fire chiefs said it was too early to speculate on the cause of the blaze.

Rydon, the company that undertook a refurbishment of Grenfell Tower, says its work met "all required building control, fire regulation and health and safety standards."

The company that manages the building, Kensington and Chelsea Tenant Management Organisation, described the fire as "devastating."

"Currently, we're focusing on helping those residents and London Fire Brigade is investigating the safety of the tower's structure but we will issue a further statement in due course," said Robert Black, the company's chief executive.

London Mayor Sadiq Khan visited the site on Wednesday afternoon with fire officials, and said authorities would address residents' concerns as questions begin to swirl on how the blaze started and ripped up the building so quickly.

"It's really important that their questions are answered. I'll be demanding answers," he told reporters.

According to witness accounts, some residents were told to stay inside their apartments as the fire raged. High-rise buildings are typically designed to contain fire outbreaks within floors, so it is often safer to stay in an apartment unaffected by a blaze.

But this fire seemed to tear up the building from the outside, gutting the outer apartments and blackening most of the facade.

One woman said her friend inside for three hours and was told by police to wait and put towels down to block the doors. When no one came to help, she decided to escape on her own.

Another witness said a family friend was "stuck on the eighth floor with her 5-year-old daughter" until 5 a.m., almost four hours after the fire broke out.

Turufat Yilma, who managed to escape, told CNN there was "no fire alarm at all." She only learned of the fire when a neighbor called her.

Several witnesses also described the horror of seeing people leap from the tower to save themselves.

"They literally just jumped ... (they) must have thought, we're not going to sit here and suffocate," said Samira Awil said, adding she had seen bodies of men, women and children covered in sheets outside the building.

Samira Lamrani, who lives next to Grenfell Tower, told the Press Association that she watched a woman throw her baby from a window to a man on the ground.

Survivors said they felt likely to be alive. Michael Paramasivan said he was watching TV in the building as his girlfriend and daughter slept when he smelled burning plastic. Soon he saw the smoke and chaos.

"I grabbed my little girl and ran down the stairs," he said. "Half of the building was ablaze by the time we got out. And it was just spreading like wildfire."

By the afternoon, emergency centers had been set up at a number of churches and posts near the building, where community members and organizations handed out food, clothes and other needs to those left with no home to return to. Members of the public were seen bringing shopping trolleys full of food to the posts.

Grenfell Tower is part of the sprawling Lancaster West Estate, an enclave of social housing managed privately on behalf of the London Borough of Kensignton and Chelsea. While the borough is one of the most affluent in London, North Kensington is a particularly deprived district.

The tower was built in the 1970s and recently subject to a $10.9 million redevelopment, according to property firm Rydon. The building was to undergo specific improvements to fire safety and ventilation works. The web page detailing the refurbishment was unavailable for a time on Wednesday.

Local councilor Robert Atkinson told CNN that the renovation works had modernized the building. "The building needed to be brought up to date with new kitchens and new heating systems," he said, adding that safety certificates had been issued and the council had been "told it had all been brought up to date."

Cladding had been added to the outside of the building, blamed by some residents for helping the fire to spread so quickly.