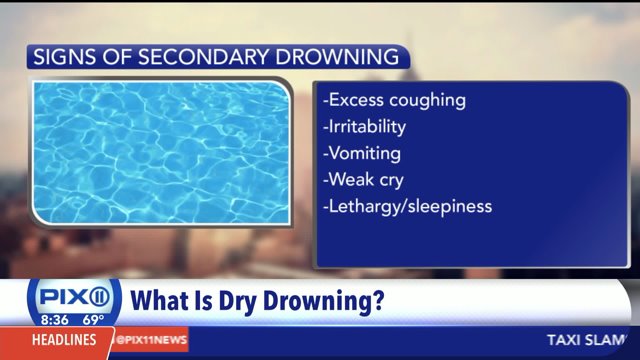 The dangers of second hand drowning

CLEVELAND, Ohio — A warning has been issued by doctors and a grieving family about the dangers of so-called dry drowning and delayed drowning after a preschooler died from the condition in Texas.

Frankie Delgado, 4, died suddenly earlier this month, within several days of swimming with his family in the Texas City Dike.

“Out of nowhere he woke up and he said, ‘Ah,’ and he took his last breath," the boy's father Frank Delgado, Jr. said.

Doctors told the Delgados that Frankie died from "dry drowning." They'd never heard of it before that day. They thought their son had a stomach bug, but he had apparently inhaled water while swimming in the levee.

“His lungs were full of fluid and there was nothing else they could do for him,” said Tara Delgado, Frankie’s mother.

According to the Centers for Disease Control and Prevention, injury drowning is the second-leading cause of death among children. About 1 to 2 percent of those cases are caused by "dry and delayed" drowning.

It can happen in any body of water, including in the bathtub.

Although dry drowning is very rare, parents need to know and recognize the symptoms, because once they start, the clock is ticking, Dr. Christine Alexander, chairman of family medicine at the MetroHealth System, told PIX11 sister station FOX8.

The condition manifests in two ways. The first occurs when a child is under water and gets water in the back of their throat, Alexander said.

"It happens in the voice box area and it starts to vibrate or really spasm," she said. "And it’s that spasming that leads to the problem with breathing."

The child might begin coughing and/or immediately struggling to breathe.

“The fluid gets down into the lungs and causes a chemical reaction,” Alexander said. “You’ll notice when they’re trying to breath, you can see their rib cage in between taking breaths.”

However, the Delgados said Frankie didn’t exhibit any symptoms until later at home when he started vomiting and had diarrhea. Other signs include chest pain, extreme fatigue and irritability.

If a child is experiencing any of those symptoms, Alexander suggests calling a health care provider or taking the child to the emergency room or urgent care where experts can quickly determine whether it’s a virus or dry drowning.

Victims can fully recover quickly with simple oxygen and other treatments. But without treatment, they most certainly could die, so Alexander said it’s always better to err on the side of caution.

“You have to trust your parental instinct and say, 'This isn’t normal,'" she said.

The doctor said one of the most important keys to prevention is getting children swimming lessons because the better they are in the water, the less likely they are to swallow or inhale water.