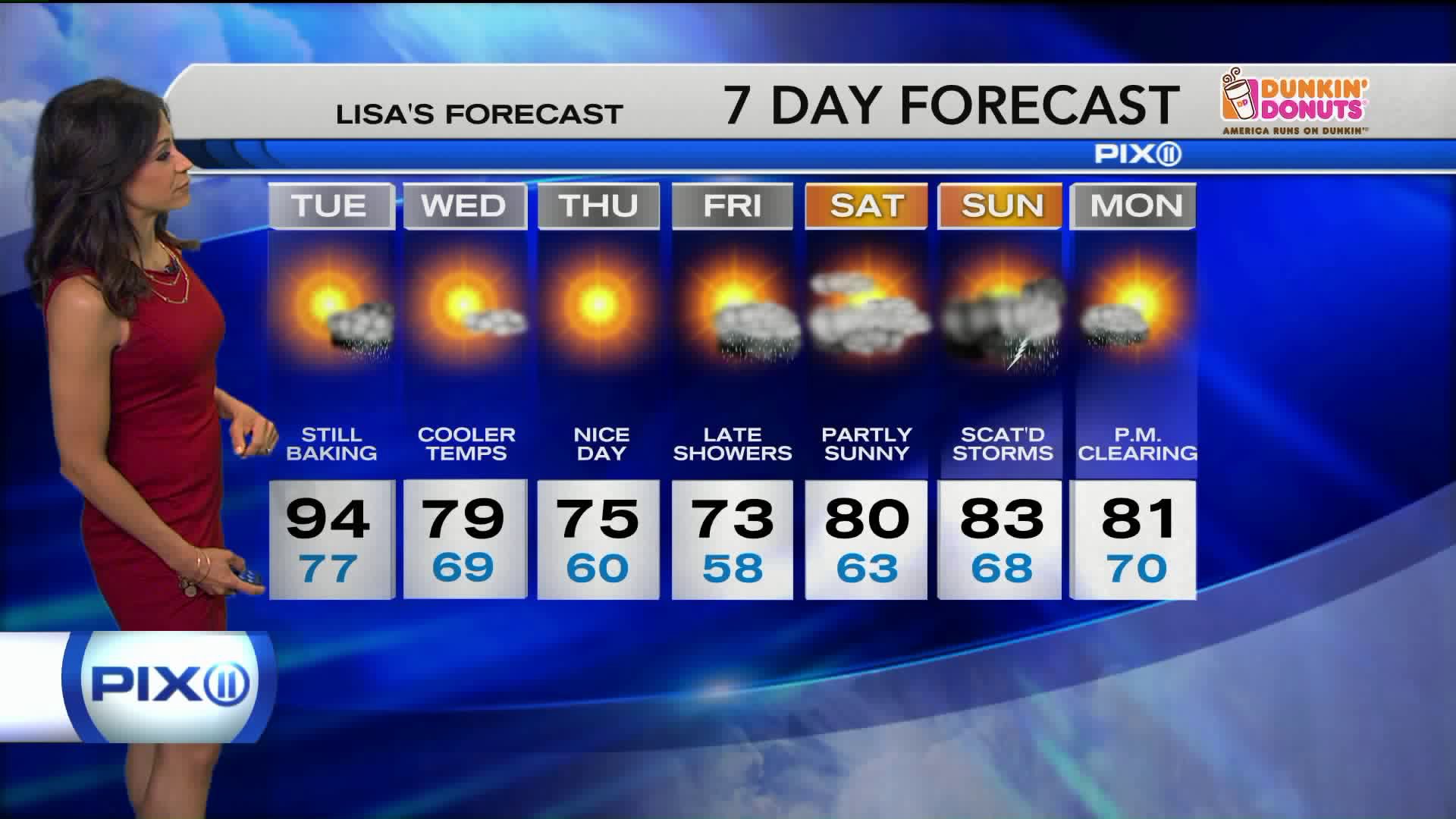 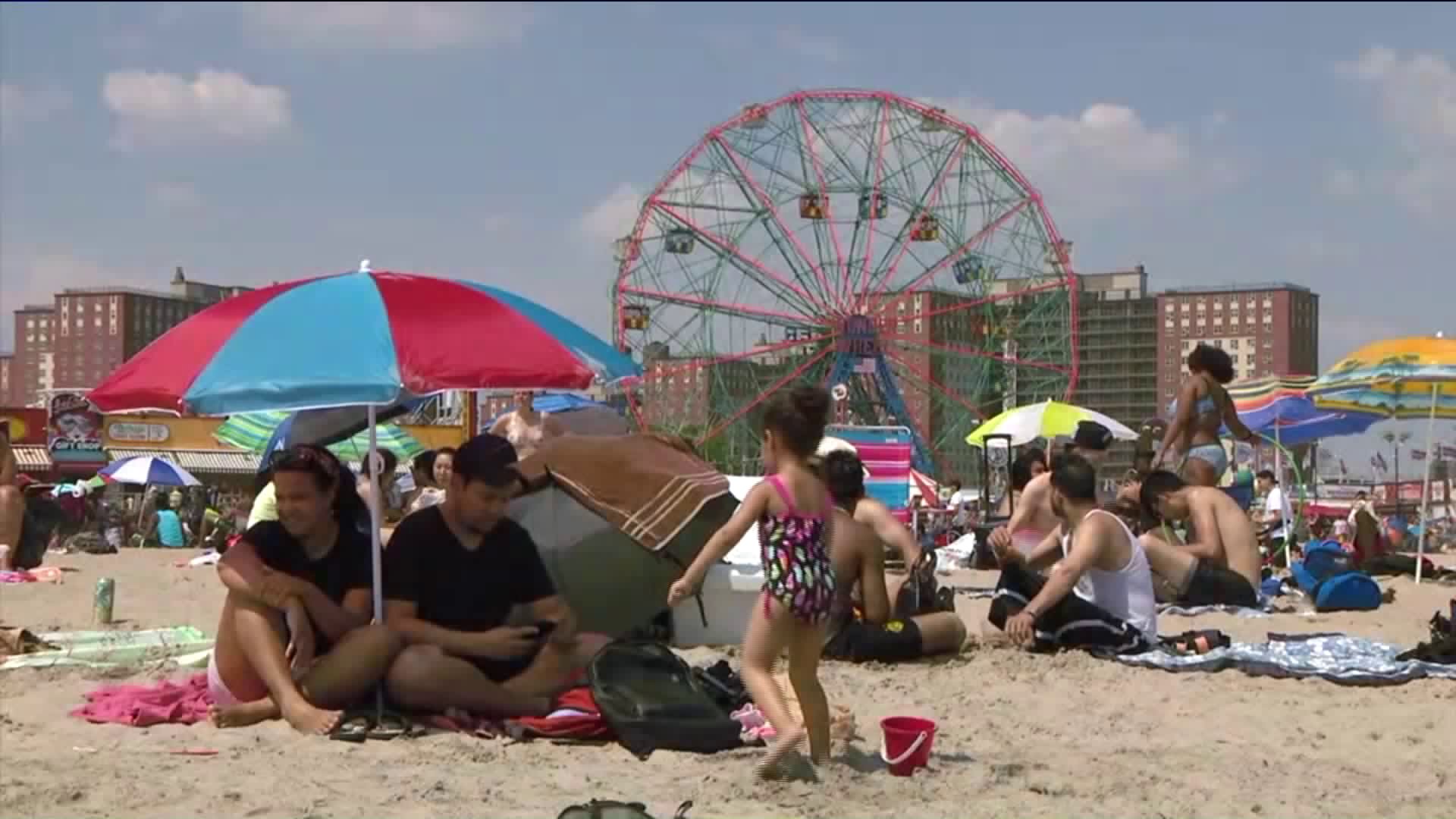 NEW YORK — High-temperature records were broken across the tri-state Tuesday during the third consecutive day of highs climbing past 90 degrees, marking an official heat wave, and prompting yet another air quality alert warning against strenuous outdoor activities.

Tuesday's highs are forecast to hit 94 in the city and mid 90s in the suburbs, but humidity will make it feel more like 95 to 100 degrees. This has prompted the National Weather Service to issue a heat advisory.

The hottest of the three-day blast of heat marks an official heat wave, defined by the weather service as three consecutive days of highs hitting 90 degrees or above.

Multiple records were broken Monday. Newark hit the hottest mark with a scorching 97 degrees, beating its 1973 record of 95.

More records could be broken Tuesday. These are the record highs:

We have another chance of record highs this afternoon. @PIX11News pic.twitter.com/lZcjaeaX7X

In addition to the heat, hazy sunshine is expected as scattered thunderstorms will likely develop into the evening.

The muggy weather has prompted an air quality alert in effect from 10 a.m. to 10 p.m. across the five boroughs, Long Island and Westchester, warning New Yorkers to avoid strenuous outdoor activity.

During the weather service's advisory, active children and adults, and people with respiratory problems, such as asthma, are advised to avoid prolonged outdoor activities and those requiring heavy exertion, according to the NYC Office of Emergency Management.

The “very young” and those with pre-existing conditions, such as heart disease, are also at risk, the weather service warns.

People with adverse symptoms should contact their personal physicians, according to the weather service.

The higher-than-normal temperatures increase ozone in the atmosphere. The air quality index on Tuesday is predicted to be greater than a value of 100 for ozone, the Office of Emergency Management states. The index was created to correlate different pollutants to one scale.

The heat is not expected to last. Wednesday will be partly cloudy and much cooler as Canadian high pressure will dominate the weather for the area. Highs will only reach 79 in the city and upper 70s in the suburbs.

Thursday will be mostly sunny and pleasant as high pressure moves through the region. The high will be 75 in the city and mid 70s in the suburbs.

Friday will be sunny early followed by increasing clouds in the afternoon as a front will approach the area from the west. There will be a chance of scattered showers in the afternoon, and highs are forecast to be 73 in the city and low 70s in the suburbs.

Warm weather will ramp up for the weekend, with high pressure remaining offshore throughout, and partial sunshine making for highs of 80 degrees in the city and low 80s in the suburbs.

Sunday will be partly sunny with scattered showers as a weak storm system moves through the region. The high will be 83 in the city and mid 80s in the suburbs.