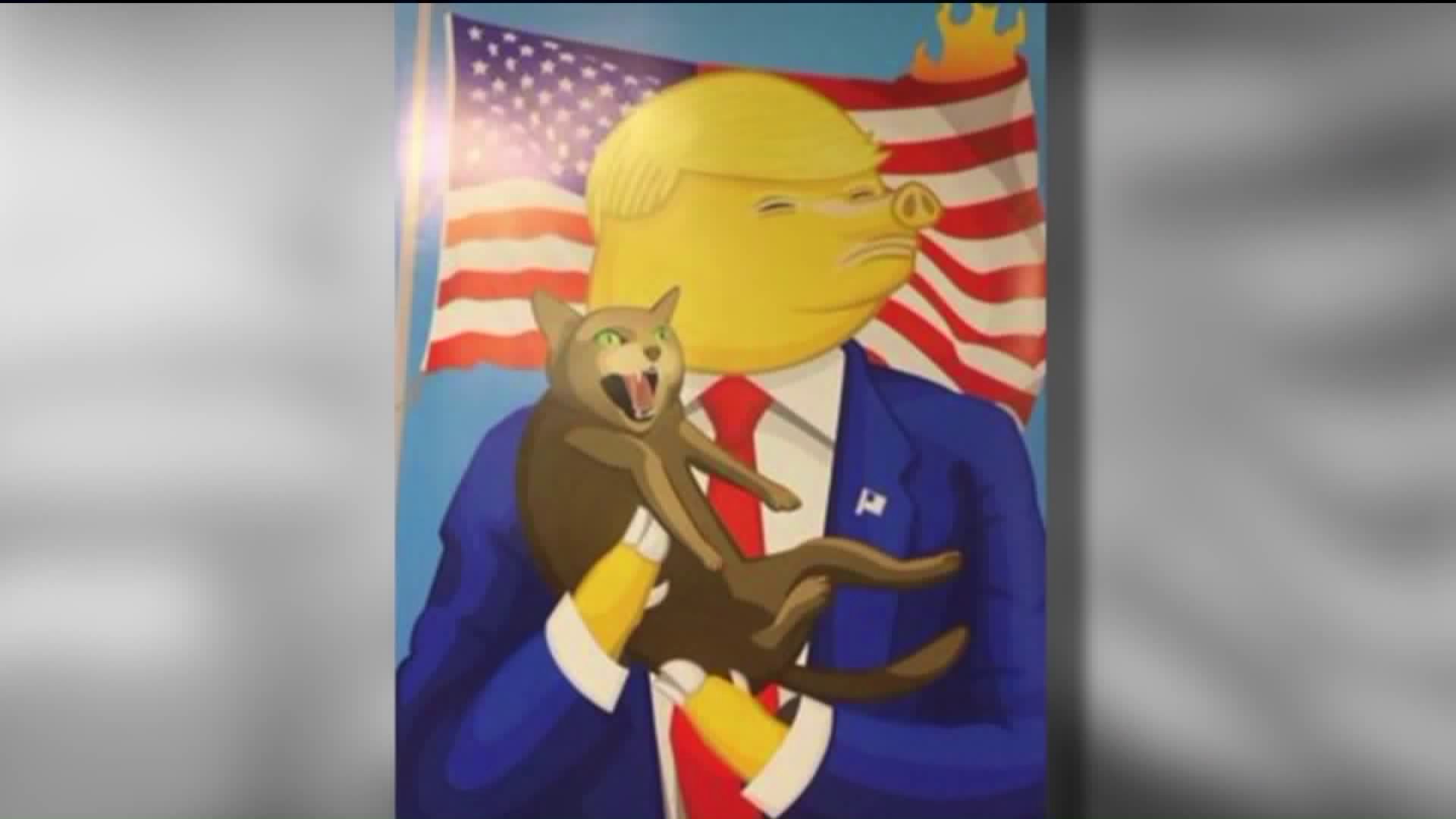 The painting - made for an assisgnment - was removed from an art show.

MORRISTOWN, N.J. — For the second time in a week, images of President Donald Trump have been removed at a local high school.

This time, however, unlike the first, the reference to the president was not flattering or favorable. It's all sparked a debate about censorship in schools.

The most recent case was at Morristown High School.

An art class was assigned to draw a political cartoon -- a satirical or humorous look at a political situation. High school junior Liam Shea produced two images, the main one being a five foot-tall, pig-like Donald Trump holding a pussycat in front of an American flag with a flame rising from one of its folds.

The second image depicted the president riding a missile while taking a selfie.

Principal Mark Manning ordered the artworks removed after less than one day of exhibition.

"I saw it," said Morris High School senior Nicole Roberts. "I thought it was funny."

She was critical of the school's decision to remove the art. "It's just supposed to be your creativity and expressing yourself," she told PIX11 News, "and by taking it down, it kind of ruined someone's thoughts."

"Art is about the way you feel," Calderon said. "And it shouldn't matter about what other people think."

Right across the street from the school lives Norman Nutt, 82. He shows his patriotism with his lawn display, which features more than a dozen American flags. He voted for President Trump and enlisted in the Navy to fight for freedom in the Korean War, he said.

He'd attended Morristown High School six decades ago, and regarding the Trump artwork, Nutt was opinionated, but terse.

"You are allowed to have an opinion," he told PIX11 News in a statement of approval of the art.

Every adult in the area who went on the record agreed with him. One mother on scene, who was waiting to pick up her daughter, added something else.

"I'm not a Trump supporter," said Cathy Peterso. "But that was really wrong of the school to photoshop that picture."

Peterson was referring to a situation at Wall Township High School, 65 miles away.

There, when yearbooks came out last week, it was apparent that some photographs of students, that had been approved by school administrators, which had Trump's name emblazoned on them, had the name removed through PhotoShop software. The yearbook advisor, a teacher at the school, has been suspended.

"You have the freedom to express whatever you want," said Ashton Pardie, in disapproval of the yearbook photos having been altered.

Pardie is a senior at Morristown High, where the artwork depicting President Trump was removed. Neither the principal of the school, Mr. Manning, nor the Morris Schools superintendent, Mackey Pendergrast, chose to respond to multiple requests by PIX11 News for comment.

PIX11 News did speak with Kelly Zeiss Shea, the mother of the high school artist, Liam Shea. She said she did not want to be interviewed, and even though she was with her son at the time, she did not want him to speak publicly.

She did indicate that the exposure that his artwork has gotten has been good overall.

Her son is now getting offers from across the country to purchase prints of his artwork, as well as requests to have it printed on t-shirts for sale.

Speaking of t-shirts, those with the various Trump logos emblazoned on them that were photoshopped out of yearbook pictures show no sign of their sales dropping off.

It's all a reminder that controversy pays, even when, as is the case both at Morristown and Wall Township high schools, the controversy is unsolicited.