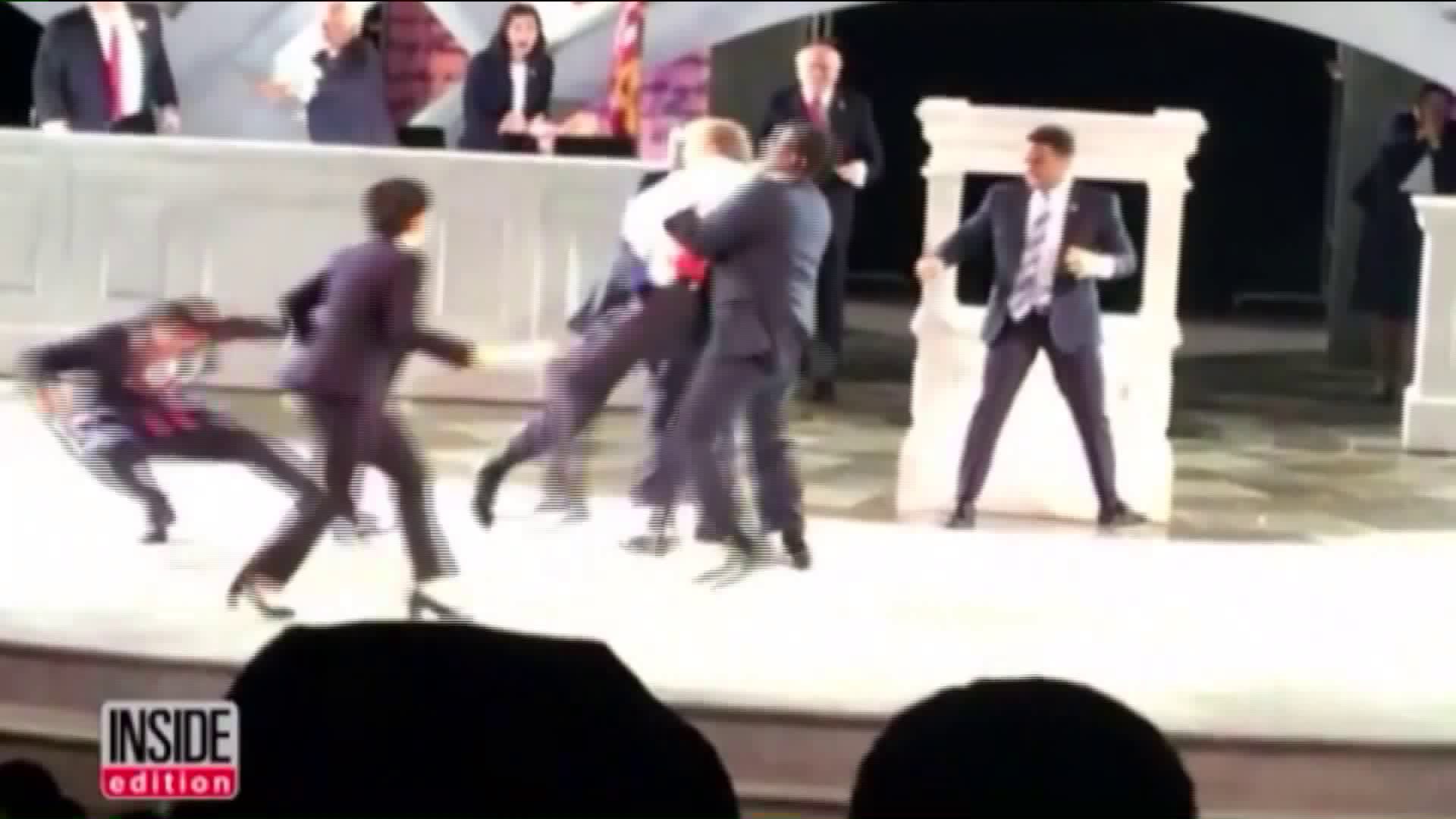 Delta air has withdrawn its sponsorship from New York`s public theater following a controversial decision by the production company to model their Julius Caeser - a character who`s assassinated - after President Donald Trump.

NEW YORK — Delta air has withdrawn its sponsorship from New York's public theater following a controversial decision by the production company to model their Julius Caeser - a character who's assassinated - after President Donald Trump.

He looks like Donald Trump, with his fluffy hair, dark suit and tie hanging below the belt. He moves like Trump. He even has a wife with a Slavic accent. And at the start of the third act, the actor playing Julius Caesar in New York City's free summer Shakespeare in the Park festival is knifed to death on stage, blood staining his white shirt.

"No matter what your political stance may be, the graphic staging of Julius Caesar at this summer's Free Shakespeare in the Park does not reflect Delta Air Lines’ values," a Delta spokesperson said. "Their artistic and creative direction crossed the line on the standards of good taste. We have notified them of our decision to end our sponsorship as the official airline of The Public Theater effective immediately."

While Shakespeare in the Park relies heavily on private donors, Donald Trump Junior tweeted, "I wonder how much of this "art" is funded by taxpayers? Serious question, when does "art" become political speech and does that change things?"

I wonder how much of this "art" is funded by taxpayers? Serious question, when does "art" become political speech & does that change things? https://t.co/JfOmLLBJCn

Whether it's art or politics - not everyone has problem with it. Virginia Thomas, who waited in the standby ticket line Sunday night, said she doesn't have any problem with the play being politicized.

The decision to inject a Trump look-alike into the leading role in "Julius Caesar" is a provocative one, given both the famous assassination scene and a nude scene in the show.

Performances at Central Park's Delacorte Theater began in late May, just days before comedian Kathy Griffin was widely condemned for posing for a photograph in which she gripped a bloodied rendering of Trump's head.

Oskar Eustis, the Public Theater's artistic director who also directed the play, said in a statement that "anyone seeing our production of 'Julius Caesar' will realize it in no way advocates violence towards anyone."

Shakespeare's play, and the New York production, he said, "make the opposite point: Those who attempt to defend democracy by undemocratic methods pay a terrible price and destroy their Republic. For over 400 years, Shakespeare's play has told this story and we are proud to be telling it again in Central Park."

"Julius Caesar" tells a fictionalized story of a powerful, popular Roman leader who is assassinated by senators who fear he is becoming a tyrant. It is set in ancient Rome, but many productions have costumed the characters in modern dress to give it a present-day connection.

"I think it's brave for the Public Theater to have a political stance," Fabre said,

People lining up to get tickets to the show this week said they weren't bothered by any similarities of the centuries-old play to the Trump presidency.

"Not at all," said George Pliakas, 39, a Manhattan orthodontist. "I think it's interesting, the analogies between ancient Roman politics and the politics of the United States now ... You want present-day interpretations infused into theater, even if it's from 2,000 years ago."

Some patrons, who begin lining up at dawn for a ticket to the 8 p.m. performance, seemed to enjoy taking verbal stabs at the 45th president.

"But I don't think he's in the same category as Trump," said Martin Margulis, a retired psychologist from Portland, Maine, waiting for his ticket on Wednesday. "I think Trump would love to be compared to Julius Caesar, who was a great warrior; Trump is a very, very disturbed individual, very immature, and his sole philosophy is winning at all costs."

That includes Caesar, played by Gregg Henry, stepping naked from a bathtub.

In an online message on the Public Theater website, Eustis says Shakespeare's work "is about how fragile democracy is. The institutions that we have grown up with ... can be swept away in no time at all."

The production runs through June 18. PIX11 has reached out to the Public Theater for comment.