Cuomo enlists Pelosi to kick off drive to win back Congress, but it feels like he’s trying to win the White House 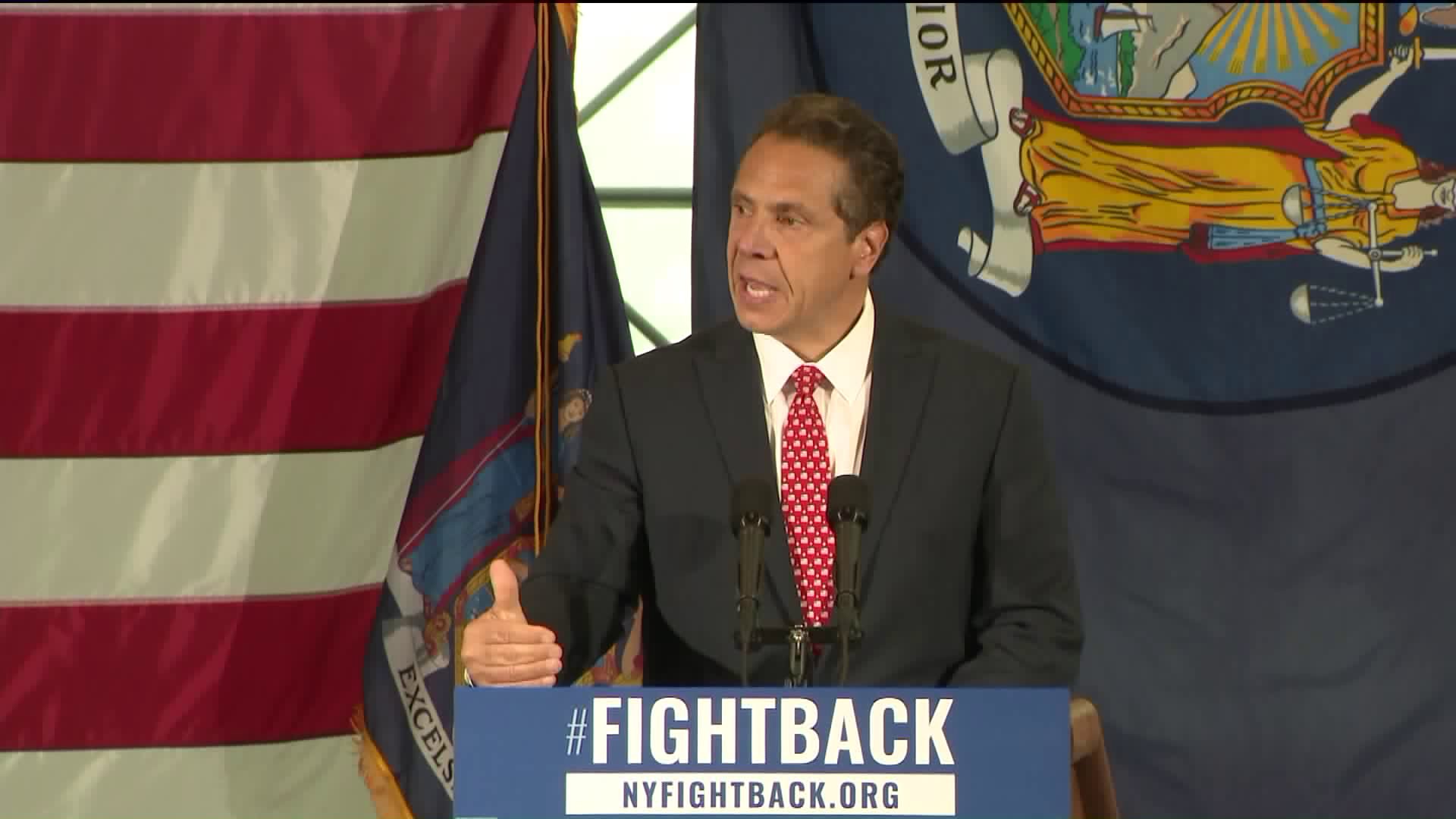 Nancy Pelosi introduced Gov. Andrew Cumo at his rally to "Fight Back".

WEST SIDE, Manhattan — It was the latest in a series of staged events this year where New York Governor Andrew Cuomo showcased his progressive political bona fides.  In many of his appearances, he's shared the stage with prominent Democrats from the national political scene.

Tuesday's event was no exception. House Minority Leader Nancy Pelosi joined him in what they together called a kickoff to flip the House of Representatives to Democratic control. They hope to unseat the nine Republicans in New York's congressional delegation.

The theme was repeated again and again like a mantra by the various guest speakers in an exhibit hall at the Javits Center.

"We need to take back the House," yelled an animated Randi Weingarten, national president of the United Federation of Teachers. "It starts in New York and it starts now," she told a cheering and yelling crowd of about 1,500, made up almost entirely of union workers.

Comedian Steve Buscemi, after telling a number of Trump jokes ("We now know what planet he's from... Covfefe."), perpetuated the day's theme.

"We do have reason for hope and change and it starts right here in New York," Buscemi said, as he shared the podium with a similarly well-recognized New York actor John Leguziamo.

But the New York theme aside, the fired-up speakers, the hyped-up endorsements and the pumped-up music, combined with the messages from the main speakers of the event gave it the feel of something well beyond New York. The event here had the look and feel of a presidential campaign.

"Cuomo is a leader in the nation," Pelosi said.

It all had the feel of a nominating convention, but not one to occupy the New York Governor's Mansion.  A bigger, more powerful home seemed to be well within the sights of the keynote speaker, who's up for re-election for governor in 2018, but who sounded like a White House contender for 2020.

"The fight to take back America starts now," Cuomo thundered from the podium.  He then threatened every Republican who doesn't "really want to... help the middle class."

"We will remove you from office in November 2018," he said to thunderous applause and cheers from a very sympathetic Democratic Party crowd.  "You can bet your political life we will do just that."

His political life, however, seemed to be at the center of the rally.

It was the latest installment of events in which the governor cast himself as a progressive in tune with the needs of most Americans.

Earlier in the year, he made separate appearances with Bernie Sanders and Hillary Clinton, first to call for, and then to pass, tuition-free college at New York state public campuses.  Earlier this year he also declared New York a sanctuary state, declared that federal defunding of Planned Parenthood would be supplemented by New York state payments and touted his record promoting full legal status for LGBTQ citizens and the state's protection of them.

He also criticized so-called Trumpcare cuts to New York Medicaid recipients and vowed to ensure coverage would not be reduced. Recently, Cuomo also committed New York to meet or exceed Paris Accord environmental standards in conjunction with other states.

Tuesday was yet another occasion for Cuomo to test national political waters.

"He certainly sounded like a president today," said Congresswoman Carolyn Maloney, who's represented Manhattan and Queens for 24 years.  "It was inclusive, it was visionary and it was substantive."

It also had its shortcomings, particularly when it came to optics.  The venue of the event that was intended to fire up the party's base to get Republicans in Congress unseated is actually named after a Republican in Congress -- liberal Republican, but a Republican nonetheless. Also, the Jacob Javits Center was the intended venue for Hillary Clinton's 2016 victory party.

Whether or not the Democrats can rise from the ashes left here seven months ago, only time -- and, most important, voters -- will tell.

PIX11 News contacted the office of Peter King, the most prominent of the local Republican members of congress that Cuomo and Pelosi want to unseat. We have yet to hear back from King's office, although his seat is generally regarded as relatively safe.