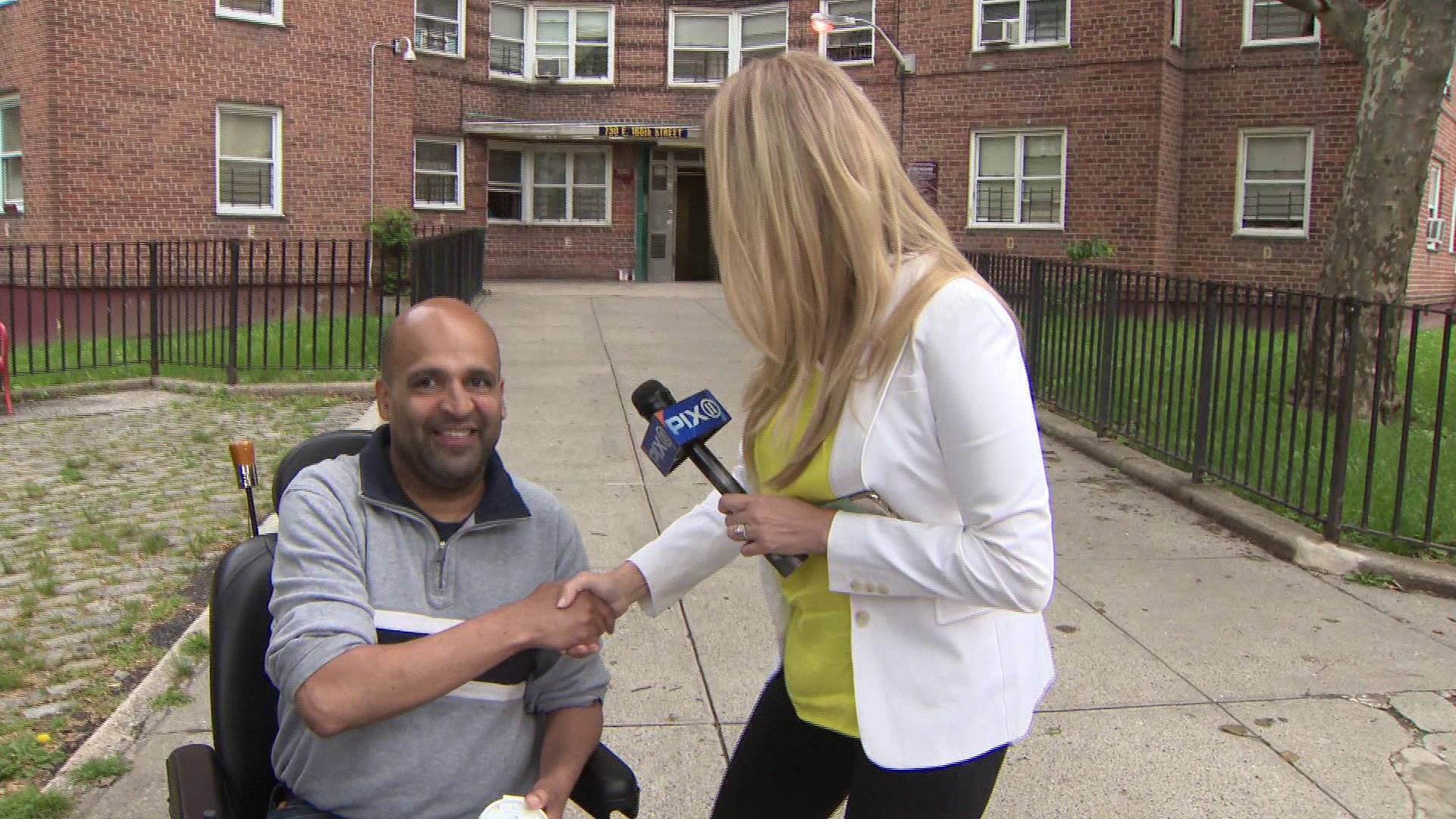 Monica is making it happen

Salvadora Pena from the Bronx says her son, George Aponte, is a prisoner in his home. For four months, Aponte's mobilized wheel chair has been broken.

Aponte says everyday is a struggle.

Aponte was diagnosed with MS, 17 years ago. A father of two daughters, Aponte says he's learned to stay strong but these days it's hard.

"I'm a prisoner. I thought my chair was going to be fixed. It wasn't fixed for months. I feel so bad," said Aponte.

They are immediately stepped in and fixed Aponte's chair. In just a few days.

Little lives with his wife on the fourth floor. Desiree Fleming says flies are coming through their vents. "When I get up, I have to kill 50 flies," said Fleming.

We called management at the building.

Neville Jolly, a manager for Amistad Management says, "We are very concerned about this fly infestation that came about as a result of exterminating the rats in the building. We will be meeting with the exterminator tomorrow and coming up with an action plan right away."

Cynthia Johnson lives in the Martin Luther King Towers in Harlem and has been fighting for years for repairs to be done to her harlem apartment. Johnson wants the City to do the necessary repairs and wants a transfer out.

"We are not getting any love from housing for years. I have a disabled niece and a son with autism," said Johnson.

Johnson doesn't have a working sink, is missing storage cabinets, and theres a massive leak in her kitchen ceiling.

"With the water coming down you can't cook on the stove," complained Johnson.

Johnson has two disabled family members, and their motorized wheelchairs don't fit inside the apartment.

"I have to be carried or crawl, that's my reality everyday," said Kianna Gomomillion, Johnson's niece.

PIX11 News reached out the Housing Authority, and they sprung into action.

"We will work with the family to find an accessible apartment that fits their needs.”

NYCHA delivered on their promise

The family is moving into a new four bedroom apartment on June 1.

Brittany Hunter lives inside the Harlem River Houses and says there are so many problems in her building.

They start at the front door.

"It's not safe anybody could get it," said Hunter.

Hunter says her front door lock has been broken for months.

Hunter says the stairwells are disgusting, covered in urine and feces, and need to be cleaned up.

"Sometimes they poop in the stairwell. There's a lot of urine. It's disgusting. I want it cleaned," said Hunter.

A spokesperson for the New York City Housing Authority says, "All NYCHA residents deserve safe, clean homes, and this situation is unacceptable. Staff will make sure garbage is picked up and the stairs are cleaned today, and they will install a new door cylinder by tomorrow.”

NYCHA delivered on their promises, fixing the door in days.

Cinnamon was a gift to his disabled wife five years ago.

"Ever since Cinnamon has been sick, my wife's health has declined," said Medina, fighting back the tears.

Medina says a vet told him Cinnamon can be saved.

Cinnamon has arthritis and may lose her legs and needs surgery immediately.

It's money Medina doesn't have.

"I hope someone can help," said Medina.

PIX11 reached out to several vets in the area and will make sure Cinnamon gets the care she desperately she needs for the new year.

Cinamon had surgery and has made a full recovery.

Janasia and Esonni Hall are both 16-year-old girls and are both going to prom in just a few months.

But their parents are not excited about the expense.

Sherrice Lyles is a mother of four now on a mission to help these young ladies get their dream dresses and hundreds of others.

"I always thought I could do something different. I thought why not start the dress driveway to help other girls that maybe struggling," said Lyles.

Lyles grew up in foster care herself, and understands the struggle.

What started off, helping dozens of girls find their prom dresses from donations, four years ago has grown.

Now the event, called Wish Upon A Prom, has grown into an event that provides 800 dresses and now tuxes for young boys.

The Mayor of Asbury Park is a fan of the project.

But they are still short about 600.

The giveaway is scheduled for May 18 and time is ticking.

"The exciting part getting the dress. Getting my hair done and nails done. It's my first prom," said Janasia Hall.

The give away was a huge success, and dozens of teens got their dream dresses.

If you want to give for next year, http://charitykingsinc.yolasite.com .