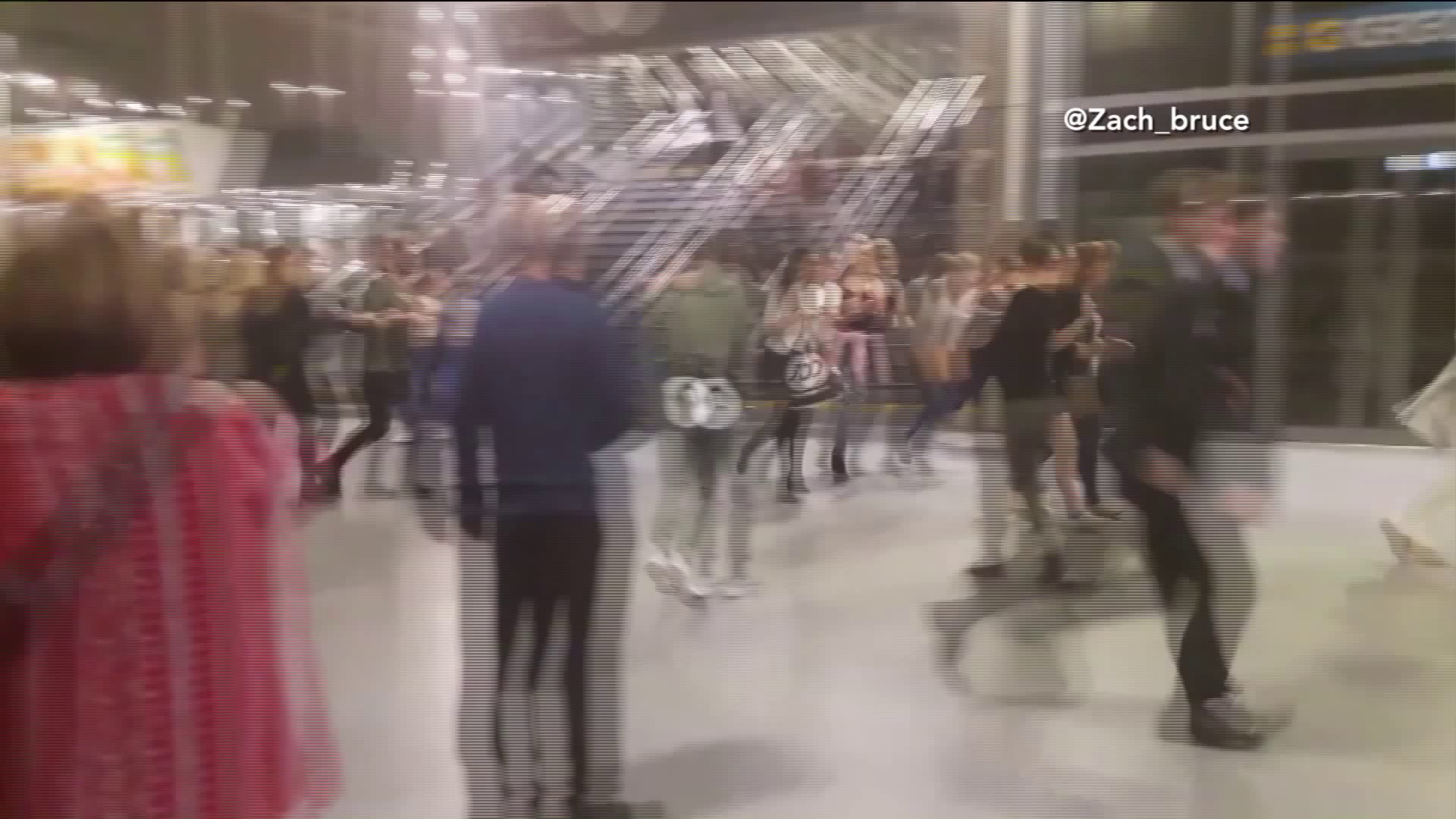 An apparent suicide bomber attacked an Ariana Grande concert as it ended Monday night, killing 22 people among a panicked crowd of young concertgoers, some still wearing the star`s trademark kitten ears as they fled.

The Islamic State group says one of its members carried about a Manchester attack at an Ariana Grande concert that killed 22, the Associated Press reports.

MANCHESTER, England — At least 22 people, including children, have been killed in a blast at an Ariana Grande concert in Manchester, in the deadliest terror attack on British soil since the 2005 London bombings.

Police said they believe a man carrying explosives acted as a lone attacker and died in the powerful explosion that shook part of the cavernous Manchester Arena as concertgoers streamed out after the American pop star's last song. Another 23-year-old man has been arrested in south Manchester in connection to the bombing, police said.

British Prime Minister Theresa May condemned the attack as "callous" and "cowardly."

Ariana Grande concert attendees Karen Moore and her daughter Molly Steed, aged 14, from Derby, leave the Park Inn where they were given refuge after an explosion at Manchester Arena on May 23, 2017 ,in Manchester, England killed 22. (Christopher Furlong/Getty Images)

Speaking after an emergency Cabinet meeting, the Prime Minister said police had identified the suspected attacker, though she did not reveal his name.

"It is now beyond doubt that the people of Manchester and of this country have fallen victim to a callous terrorist attack. An attack that targeted some of the youngest people in our society with cold calculation," she said.

"We struggle to comprehend the warped and twisted mind that sees a room packed with young children not a scene to cherish but as an opportunity for carnage."

Images from the scene show people running in a panic down stairs to escape the 21,000-seat arena amid the relentless screams of frightened children and young teenagers. Some parents say their children are still missing.

Greater Manchester Police Chief Constable Ian Hopkins said that police were investigating whether the attacker was part of a larger network or plot.

Grande, who had just finished the first of three scheduled UK performances, tweeted about her devastation several hours later: "broken. from the bottom of my heart, i am so so sorry. i don't have words."

Britain has been under a "severe" terror threat alert for three years and there has been an uptick in terror-related arrests in recent months.

Police have been warning that another attack was highly likely after a man plowed his car into a crowd on London's Westminister Bridge in March and stabbed a policeman, in an attack that left six dead.

Monday's bomb attack has raised concerns that a more sophisticated network may exist in the country than previously thought.

As many as 400 police were deployed in Manchester overnight, Hopkins said early Tuesday, and a CNN journalist saw a heavy armed police presence in parts of the city, particularly outside the Royal Infirmary Hospital where several victims are being treated.

Greater Manchester Mayor, Andy Burnham, described the attack as "our darkest of nights."

"Manchester is today waking up to the most difficult of dawns. It is hard to believe what has happened here in the last few hours and to put into words the shock, anger and hurt that we feel today. These were children, young people and their families that those responsible chose to terrorize and kill. This was an evil act," he said.

The explosion rocked the arena at around 10:30 p.m. (5:30 pm ET), and the sound of wailing sirens cut through the smoky aftermath of the blast soon after.

The first floral tributes to the 22 victims of the suspected terrorist attack are placed on the empty streets on Shudehill, May 23, 2017 in Manchester, England. (Christopher Furlong/Getty Images)

Crying children and parents desperately tried to find each other as cell phone signals faltered in the deluge of calls, witnesses said.

Manchester resident Charlotte Campbell told CNN as she was still waiting for news on her 15-year-old daughter, Olivia. "We've tried everything we can. They're telling us to wait by the phones," she said.

Olivia had gone to the concert with a friend and neither have been in contact.

"Her dad is out looking ... It's the most horrible feeling ever, to know your daughter is there and you don't know whether she's dead or alive.

"I want her home and I want her safe. ... I just want her to walk through the door."

Coral Long, the mother of a 10-year-old concertgoer, told CNN they were getting ready to leave the arena when they heard a loud bang from the left side of the arena that sent the large crowd running. "How we weren't crushed to death is a miracle."

She said her daughter was devastated. "For her to be 10 years old and witness something like that is just horrific."

Karen Ford, who had taken her 13-year-old daughter to the concert, described "mayhem" on the street.

"I brought my baby home, which some people won't be (able to do) tonight."

A nearby hotel became a focal point for parents searching for their children who had been at the concert. Some hotels opened their doors to people who could not get home due to an area lockdown. Taxis and local people offered free rides to those affected.

US President Donald Trump slammed the attack, saying that terrorists were "losers."

"I extend my deepest condolences to those so terribly injured in this terrorist attack and to the many killed and the families, so many families, of the victims. We stand in absolute solidarity with the people of the United Kingdom," Trump said.

"So many young beautiful innocent people living and enjoying their lives murdered by evil losers in life. I won't call them monsters because they would like that term. They would think that's a great name. I will call them from now on losers because that's what they are.

"This wicked ideology must be obliterated."

A US Department of Homeland Security statement said it was "closely monitoring" the situation.