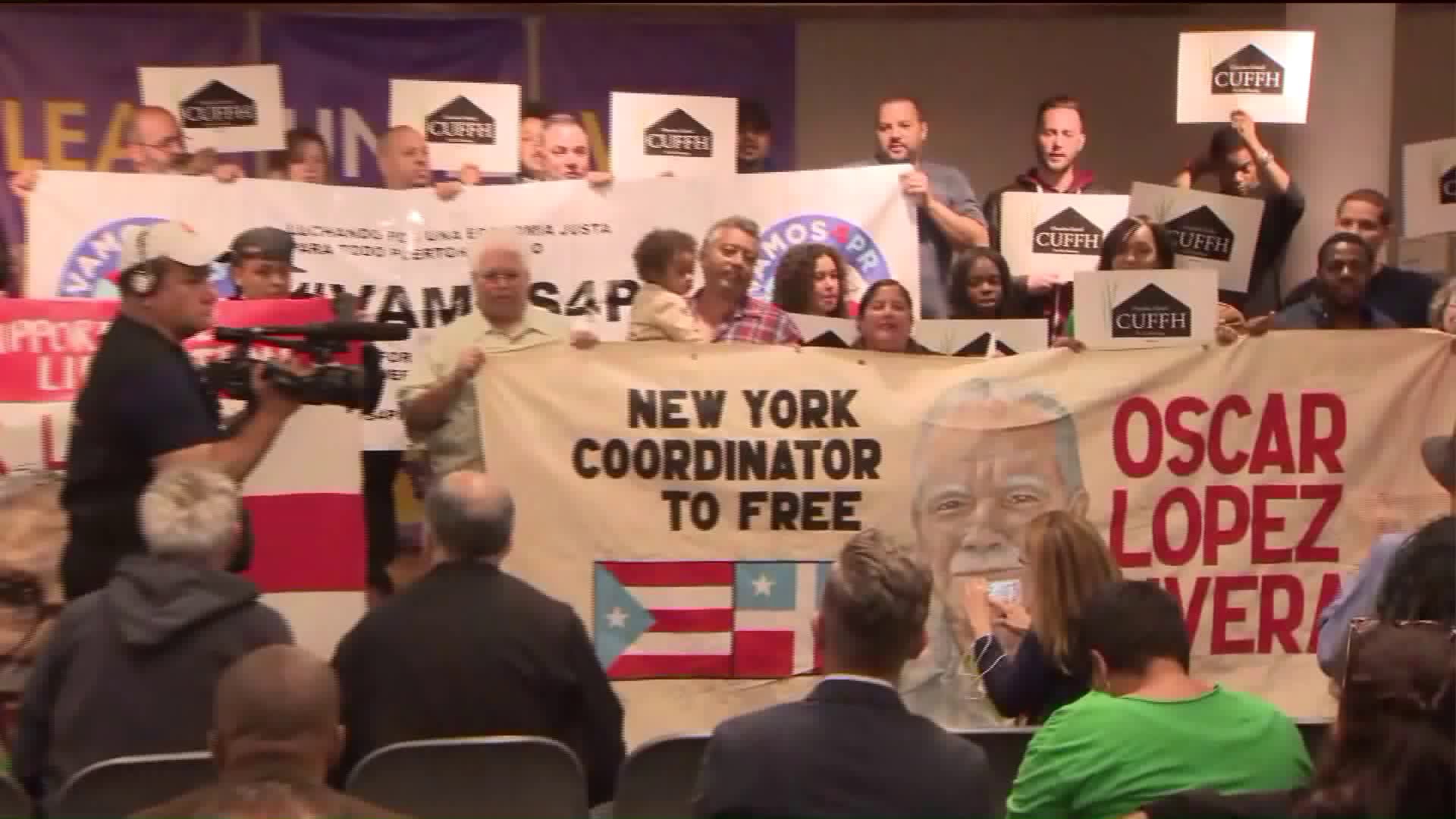 CHELSEA, Manhatan — Its theme is "One People, Many Voices," but more and more voices are taking opposite sides regarding a controversial part of the Puerto Rican Day Parade.

Within hours of each other on Monday, one of the city's most powerful political figures expressed support for the parade's honoring of the leader of a Puerto Rican separatist group, while the city's top cop announced that, contrary to tradition, he won't be marching in next month's parade.

Specifically, parade organizers declared Oscar Lopez Rivera a "national freedom hero," a title of honor that many in the 8 million strong Puerto Rican community worldwide support. But possibly as many Puerto Ricans oppose the title, even if they may not be against Lopez Rivera participating in the parade.

Late Monday morning into the early afternoon, there was a rally at the headquarters of the 32BJ SEIU labor union headquarters here. With billboard-size banners, bullhorns, posters, drums and other instruments, about 60 people filled an event space with chants and music in support of the parade generally and in support of Lopez Rivera specifically.

Joining the labor leaders, community activists and academics at the rally was the speaker of the New York City Council, Melissa Mark-Viverito.

She pointed out at the news conference that Lopez Rivera, who was convicted of seditious acts against the U.S. government in the late 1970s, had never been proven to have been directly connected to a crime that resulted in death or injury.

His conviction, however, was the result of prosecutors' claims that he had trained armed militants, made bombs and smuggled weapons.

Mark-Viverito said that she is "really proud" that Lopez Rivera, a "hero," is "returning to us."

Within the hour that the City Council speaker had made her comments, Police Commissioner James O'Neill made comments of his own after a City Council meeting at City Hall.

“I usually do march in most of the parades with the fraternal organizations," the commissioner said, "but I’m not going to be marching this year.”

“I cannot support a man who’s the co-founder of an organization that engaged in over 120 bombings,” O'Neill continued. He added that he will be in attendance at the parade, even though he won't march in it, as is customary for police commissioners.

It's not just him, by the way, or various law enforcement organizations, including the NYPD Hispanic Society, who are not joining in the parade in June.

Just before that event, the New York Hispanic Clergy Organization, or NYHCO, headed by State Senator Ruben Diaz, issued a statement in question form. It asked, did the parade "go too far by creating and giving the title of 'National Freedom Hero' to Oscar López Rivera, causing great controversy and division in the Puerto Rican community? YES," it answered, in all capitals.

Still, the NYHCO said it supports Lopez Rivera attending the parade and marching in it. The organization also called on Goya to restore its sponsorship of the parade.

There is no indication that that will happen.

The parade, however, will go on. It will kick off on Fifth Avenue on Sunday, June 11.