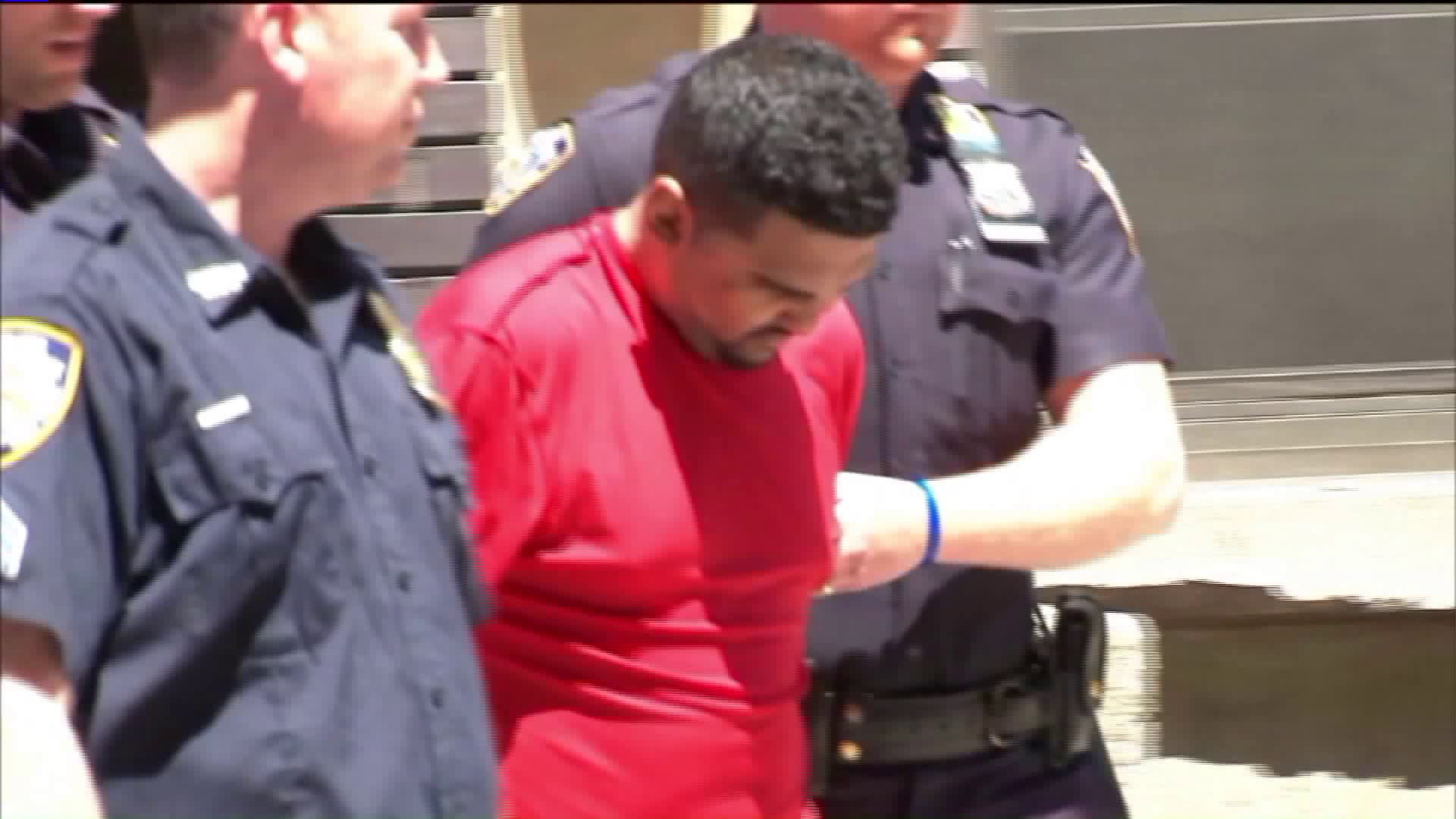 A man with a history of drunken driving, has been charged with murder after police say he barreled a car through the crowded sidewalks in Manhattan`s Time Square, leaving one person dead and injuring 22.

NEW YORK –– A man with a history of drunken driving, has been charged with murder after police say he barreled a car through the crowded sidewalks in Manhattan's Time Square , leaving one person dead and injuring 22.

Richard Rojas, pictured above in a 2012 mugshot, was taken into custody after he allegedly plowed through a crowd in Times Square. (Florida Police)

The deadly rampage on Thursday started after the driver allegedly made a U-turn, then steered the car into the packed sidewalk where it rammed dozens of pedestrians for a three block stretch. Streets in the area were closed overnight and reopened Friday.

One surveillance video showed the maroon car jump the curb and slam into a group of people, sending bodies tumbling over the hood of the speeding Honda Accord.

The rampage killed Alyssa Elsman, an 18-year-old resident of Portage, Michigan, who had been visiting the city, and left four people in critical condition, officials said.

The suspect, Richard Rojas, of the Bronx, tested positive for PCP and told police that God made him do it, a law enforcement source told CNN.

Rojas, 26, who suffered from "psychological issues," told police he expected officers to shoot him, according to the source.

They are expected to survive, officials said.

Rojas has been arrested twice in New York -- in 2015 and 2008 -- for drunken driving, New York Police Commissioner James O'Neill said. In 2013, Rojas while in the Navy, pleaded guilty to drunken driving, failure to pay a just debt, drunk and disorderly conduct and communicating a threat. A military judge sentenced him to three months confinement.

There is no indication the incident, which unfolded just before noon, was an act of terrorism, New York Mayor Bill de Blasio and other officials said. It is being investigated as an accident, a police official said.

Before striking pedestrians, the 2009 Honda Accord was "out of control," an emergency management official said.

The speeding car jumped the sidewalk on the west side of 7th Avenue at 42nd Street and struck several pedestrians before crashing at the northwest corner of 45th Street, police said.

Witnesses described a harrowing scene that started with screeching tires and ended with screams, chaos and a fiery crash at one of the world's most visited sites.

Elizabeth Long, of Dayton, Ohio, was walking to the Hard Rock Cafe when she saw a maroon car heading toward her on the sidewalk. Hearing screams and fearing that the car would hit her, she ran to a nearby building's revolving door.

"I wasn't even all the way in when the car sped by," perhaps 10 feet behind her, said Long, a 54-year-old who was in town to see a musical.

When Long went outside, she saw at least six people lying on the ground, including a woman lying face-down with blood pouring from her head.

"I'm shaken," said Long, who wasn't injured. "Two of the people I saw that were really hurt, people were beside them ... we were trying to tell (police) they were hurt."

"I felt so bad ... standing there," not being able to do anything more to help, she said.

A tourist from Argentina told CNN affiliate WABC that he was shocked to see the car that "was like bowling, hitting people."

Witness: Driver was screaming and flailing his arms

Annette Proehl of Pennsylvania, was in Times Square with children on a field trip when she heard the screeching tires of the vehicle and people screaming. She watched the car slam into a steel divider and catch fire, she said.

"It was more of a surreal thing," she said. "We initially thought they were filming something."

The car was lodged on a steel bollard -- of which there are more than 200 on Times Square sidewalks to stop vehicles from coming through.

The car's windshield was shattered and flames billowed from the hood.

"He ran out of the car," Brandix told CNN affiliate WPIX. "He was screaming at the top of his lungs and he was flailing his arms in all directions."

Brandix has since been hailed a hero for helping to restrain the driver.