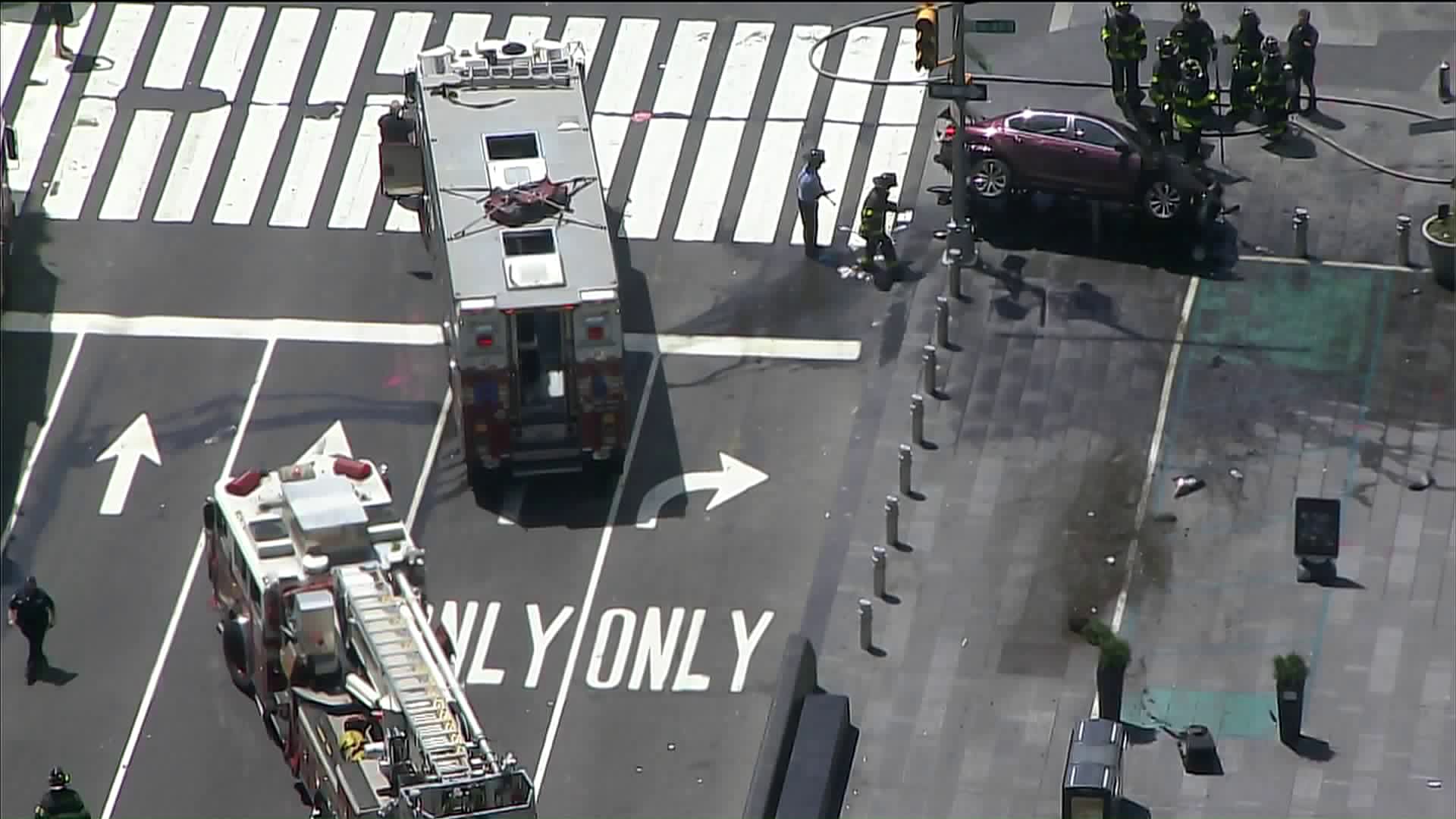 Total Traffic camera shows the aftermath of a crash in Times Square that killed a tourist and injured dozens of others. 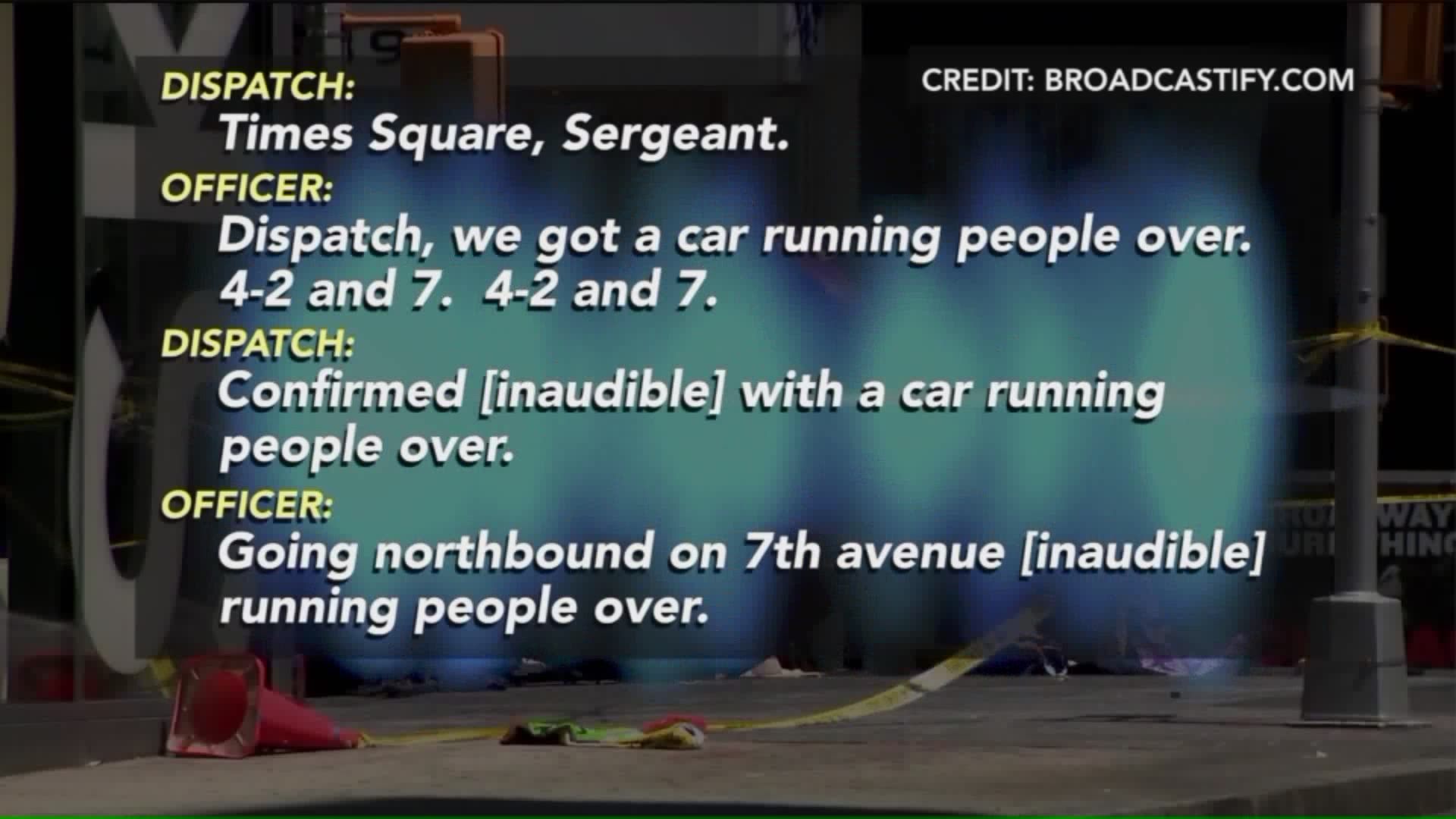 TIMES SQUARE, Manhattan — A speeding, wrong-way driver with a history of DWIs jumped a curb at 42nd Street and Seventh Avenue in Times Square and carved a three-and-a-half-block tear of horror at lunchtime through pedestrian-choked sidewalks, killing an 18-year-old woman and injuring 22 others, four of them critically.

The driver, who allegedly put up a fight and threw punches at a traffic agent who tackled him, was taken into custody at the scene and tested for sobreity, sources told PIX11 News. Police sources said the suspect may have taken K2, or synthetic marijuana.

The driver has been identified as Richard Rojas, 26. He is a resident of the Bronx and served in the U.S. Navy, Mayor Bill de Blasio said. He is expected to face a judge Friday on a slew of charges, including murder and 20 counts of attempted murder.

Rojas has been arrested in the past and has two prior incidents of driving under the influence, NYPD Commissioner James O'Neill said at a midday news conference. His most recent arrest happened this month for alleged menacing.

There is "no indication" that the crash has links to terrorism, de Blasio said. Still, anti-terror security will be stepped up as a precaution and crowds were being pushed back in all directions while the scene is under investigation. Pedestrians and drivers are urged to avoid the area if possible.

Police said Rojas was driving south on Seventh Avenue in Times Square at 11:56 a.m. when he made a U-turn on West 42nd Street and head north along the westside sidewalks for three and a half blocks.

A maroon-colored 2009 Honda Accord  came to rest with two of its wheels in the air, leaning on a lamppost and steel barriers intended to block vehicles from getting onto the sidewalk.

An 18-year-old woman -- identified as Alyssa Elsman -- was killed. She was visiting New York City from Michigan, sources said. Her 13-year-old sister was also hurt in the crash, officials said.

"As facts continue to emerge, my heart goes out to the victims of this terrible tragedy, as well as their families," Gov. Andrew Cuomo tweeted.

Nigro said that while he is "very hopeful" those critically hurt victims will surive, it "doesn't mean they're cleared."

Patel shared his story with PIX 1 News as he remained cooped up in his newsstand for several hours. He was one of the closest eyewitnesses to a mad scene.

One that included pedestrians pinned under the accord as alleged driver Richard Rojas sped down the sidewalk.

"I am positive there was one, but I think there was another one on the side of the car too," Patel said about how many people he saw under the car.

The car missed him by a few feet.

Patel estimates the velocity of the vehicle to be approximately 40 miles per hour --- perhaps even greater as he barreled down the sidewalk.

Adding that Rojas, drove the vehicle without a care for human life, "Right, as soon as he passed me... he got, I think there was another lady that got under the car and then he went towards 45th and that is where he hit the poll."

Dwayne Jackson is a vendor at 45th and Broadway, where the car came smashing to a halt, "I saw the car hit the sidewalk embankment, jump the curb and thank God the terrorist stubs are there, the little cylinders, because that stopped the car from going into the swatch watch."

From there, Jackson was shocked to see the driver's next move, "The guy jumped out and started running down the street, running down Broadway."

No doubt this is a tragic day in the heart of the city. Jackson feels that an even greater loss of life was avoided, "This could have been a lot worst."

PIX11's Mario Diaz and the Associated Press contributed to this report.