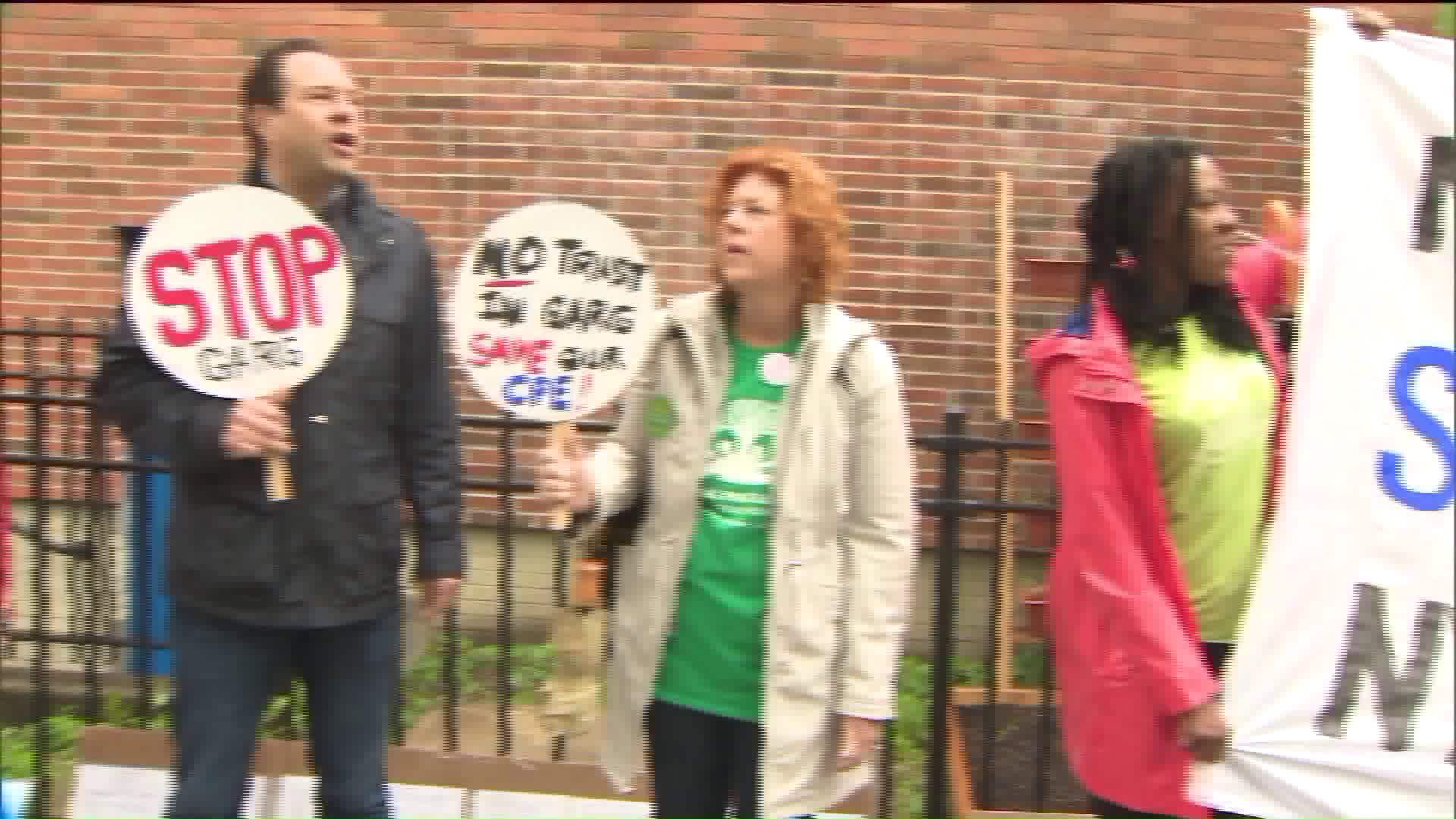 EAST HARLEM, Manhattan — Nearly half of the families at an elementary school in East Harlem kept their children home on Friday, in the latest movement in an ongoing campaign to get the city to remove the principal, who they say is vindictively trying to alter the culture and the mission of the historic institution.

"I cannot understand that Mayor de Blasio lets this happen to children, teachers and families," said Anika Tam, a parent of two children at the school, Central Park East 1, or CPE1.

Tam had been a student herself at the school, starting in 1984. Her family was among about 80 of the school's 170 families that boycotted classes on Friday.

So was the Chau family. Joey, 8, and Mei Mei, 7, spent the afternoon building fortresses out of wooden blocks, reading and crafting with modeling clay at home.

"We decided to strike," their mother Cindy Lin Chau said, saying nothing else seems to spur action from the city. "We've written letters. We've done petitions."

On Friday morning, Chau joined dozens of other parents chanting, singing and carrying protest signs in front of the school on 106th Street. They and other parents also participated in a phone-in campaign to Mayor Bill de Blasio's office. They made some 200 calls in two hours.

It's all an effort to try and win the dismissal of their principal, Monika Garg, who they say has waged a war on the school.

"There's retaliation against the teachers," said Chau, who added that it's resulted in "an exodus of many teachers who've been there 10, 20 years."

"My daughter," Chau continued, "who has significant needs, multiple disabilities, her teacher was just yanked out."

Her daughter Mei Mei's kindergarten teacher is one of two teachers currently under investigation by order of Principal Garg. The teacher is a published expert on early education who did additional studies in special education when she'd learned that Mei Mei has Down syndrome and wears a Cochlear implant for hearing. All charges against both teachers are unsubstantiated despite up to a year and a half of investigation by the city.

Garg has been principal for nearly two years at the CPE1 Elementary School. It was founded 43 years ago by educator Deborah Meier to give children who live uptown, and who may not have many opportunities, a solid chance. Her progressive, unorthodox approach worked, and it eventually established Meier as one of the world's foremost educators. She won a MacArthur Foundation "Genius Grant" in 1987.

Meier is now in retirement in New England, but has publicly called for support of the parents' protest of the principal. Her statement is on the protest group's website, savecpe1.org .

Three years before Meier won the MacArthur fellowship, Anika Tam began her own CPE1 education. Now, she's a vocal supporter of efforts to unseat Garg, and on Friday, said, "I kept my children home from school today because I felt it's unsafe for them to be there."

Tam said that Garg's practices have been detrimental to everyone, especially children, some of whom, the parents say, were interviewed as part of investigations against teachers, without parents' permission and at the behest of Garg.

PIX11 News has requested an interview with Schools Chancellor Carmen Fariña regarding the situation at CPE1 and its principal, who has apparently been favored by the chancellor. The Department of Education has not yet responded to PIX11's request, or for any other confirmation or denial of any of the parents' specific claims.

DOE spokeswoman Toya Holness did respond to our story with the following statement:

"We are committed to delivering a high-quality, progressive education with academic rigor, and doing what’s best for CPE 1 students. DOE department experts met with families to discuss specific concerns, challenges and solutions, and we are working closely together to move the school community forward."

Meanwhile, Michael Mulgrew, president of the United Federation of Teachers, the New York City teachers' union, expressed strong support for the parents' strike on Friday and their general efforts to get the principal of CPE1 dismissed.

"The United Federation of Teachers has called upon the Department of Education to resolve the untenable situation at CPE 1," he said in a statement to them. "This is a school where the administration is unfairly disciplining teachers, barring parents from entering the school building, and enabling turmoil to fester. This is not a recipe for success."