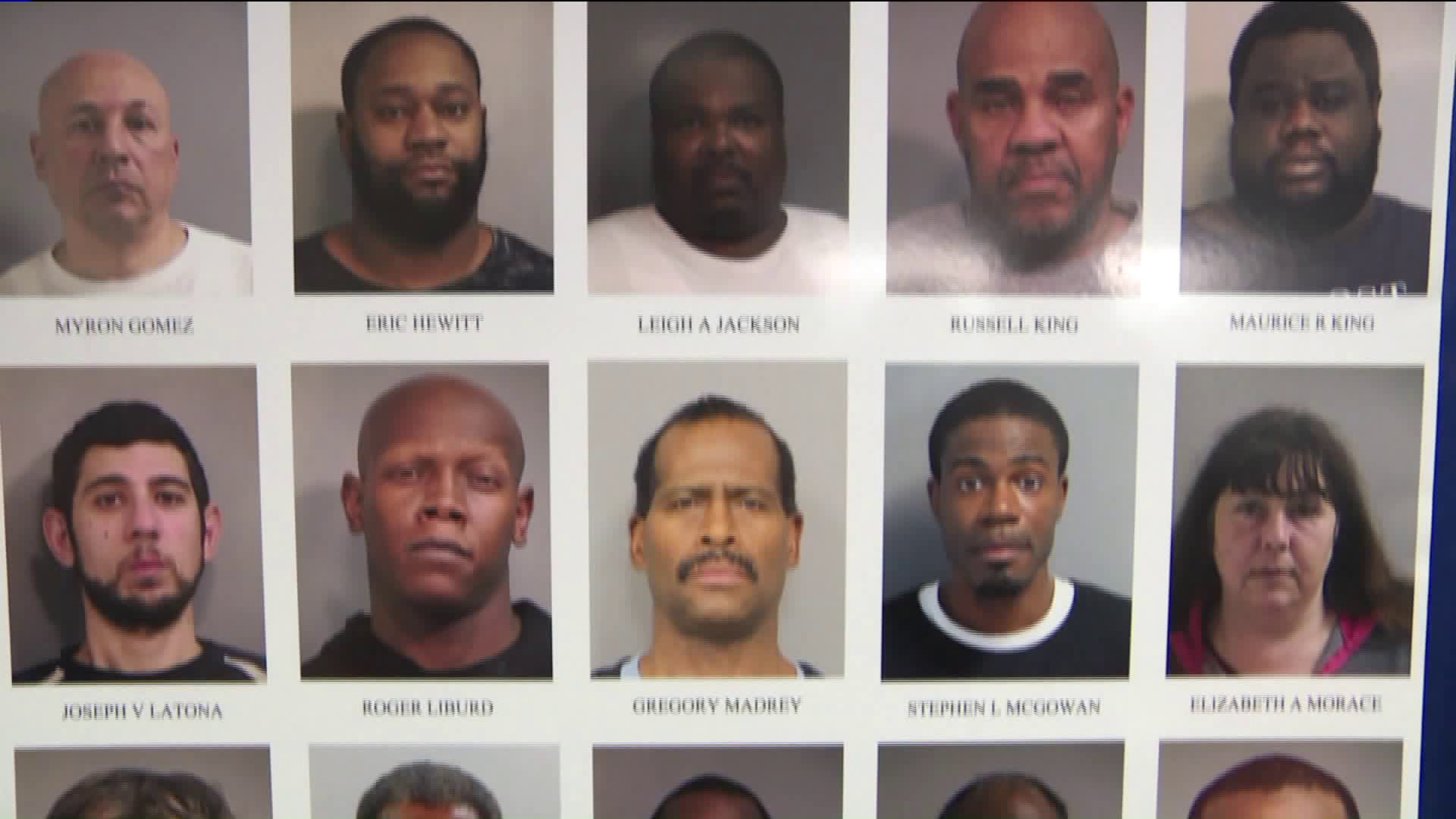 We take a closer look at the life of a young woman who suffered from the opioid crisis.

NASSAU COUNTY — Authorities announced the takedown Friday of a big heroin ring that sent 23,000 heroin doses a week into Nassau County, and Queens and Brooklyn in New York, with 14 people indicted, including a former NYPD narcotics detective.

Law enforcement officials estimate they sold $170,000 a week of the narcotic.

"Our message is clear drug dealers need to know what they're putting out on the street is killing people," said Madeline Singas, Nassau County District Attorney.

One of the defendants is a retired NYPD narcotics detective, Karan Young. At the time of her arrest, Young worked for Delta Airlines. Police say Young assisted her long-time boyfriend Leigh Jackson in his narcotics distribution business by collecting money for him. Jackson is also named as a defendant.

The busts come at a time when public health officials have called the opioid epidemic the worst drug crisis in American history. Millions have been spent to battle addiction and crime from drug use. Now, counties, cities and towns across the country want some of that money back.

They're taking aim at drug manufacturers. Suffolk County has already filed a lawsuit and now Nassau County is expected to take action as well.

Gov. Andrew Cuomo has called Long Island one of the three epicenters in the state when it comes to the opioid epidemic, the other two being Buffalo and Staten Island.

Nassau County has hired a law firm to sue opioid manufacturers, in an attempt to recoup some of the tax dollars used to fight addiction.

In a statement to PIX11 from the office of Nassau County Executive Ed Mangano:

“Nassau County is seeking damages from drug manufacturers and doctors involved in the marketing and promotion of opioids. Local governments such as the County of Nassau have spent millions of dollars in costs related to opioid addiction and abuse including health care costs, criminal justice and victimization and lost productivity.”

Long Island resident Tatiana Green is a recovering addict. She’s been clean for six years and she now counsels others battling addiction.

“By the time I turned 22, I had already lived several lifetimes. I feel like I've already been through so many overdoses. When I was prescribed an opioid at 17 for a medical condition, I was not aware I could become addicted to it that it could lead to later heroin use,” said Green.

Green agrees the drug makers should be held accountable.

“If you make something and are selling it for years eventually you know what's in it,”

Dr. Jeffrey Reynolds, president of Family and Children’s Association, based in Mineola, has spent his career addressing addiction. Reynolds is on Governor Cuomo's Heroin and Opioids Task Force.

“This is probably the biggest health crisis Long Island has faced in decades, the costs associated is huge. The government has been bearing the costs for that and ultimately taxpayers, while the pharmaceutical companies are quite frankly laughing all the way to the bank,” said Reynolds.

“We have pharmaceutical companies that continue to churn out medication that are highly addictive and they absolutely ought to play some role in cleaning up the mess they helped create. The companies who knew 10, 20 years ago should have been clearer about the addictive quality and the potential consequences of long-term use,” adds Reynolds.

He says people on Long Island have better access to prescription pain killers. When those prescriptions run out or people can no longer afford it, the addiction is already rooted. Heroin is an opioid that is cheap and readily available.

Reynolds also says we got to this point when officials didn’t acknowledge the problem when addiction experts were sounding the alarm years ago.

“Heroin got a 10-year head start, now we are trying to catch up we are losing lot of kids along the way. We didn’t take the necessary action to make sure treatment was available and accessible to everybody. There's simply no more room, treatment facilities are literally bursting at the seams with folks pleading for help or else they will die of overdoses,” Reynolds said.

PIX11 received this response from Purdue Pharma, the maker of OxyContin. Connecticut-based Purdue Pharma is one of the companies named in the suit filed by Suffolk County.

"We share public officials’ concerns about the opioid crisis and we are committed to working collaboratively to find solutions. The delegation of law enforcement authority to a private law firm with a financial interest in the outcome creates serious public policy concerns and presents a clear conflict of interest."