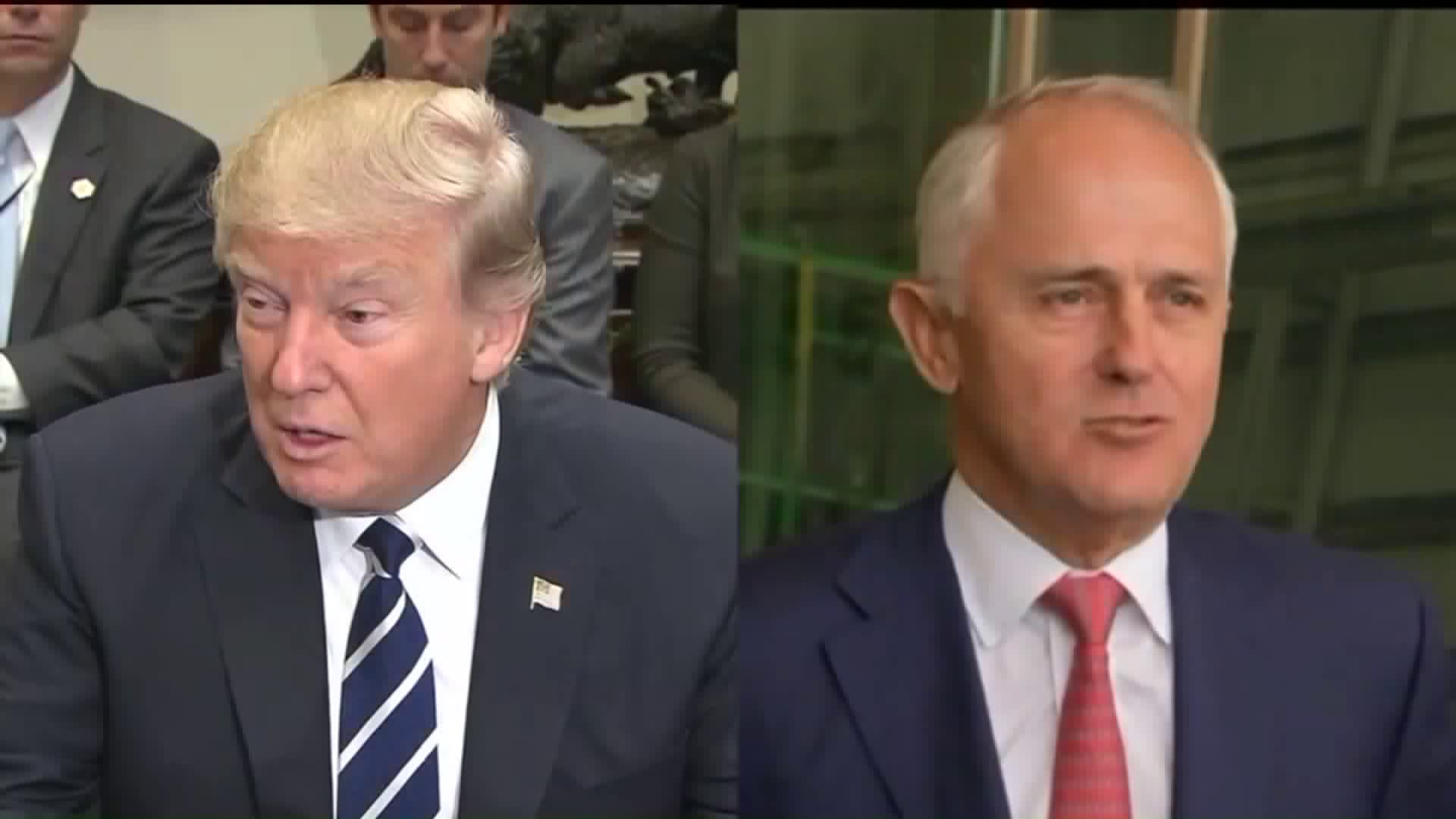 President Donald Trump and Australian Prime Minister Malcolm Turnbull will aim to move past the rocky start to their working relationship when they meet for the first time and commemorate the 75th anniversary of an important World War II naval battle.

WASHINGTON — President Donald Trump and Australian Prime Minister Malcolm Turnbull will aim to move past the rocky start to their working relationship when they meet for the first time and commemorate the 75th anniversary of an important World War II naval battle.

Trump and Turnbull were meeting Thursday in New York City, a trip that will also mark Trump's visit home since he left in January to be sworn in as president. Trump's homecoming was expected to be unfriendly, however, with multiple protests planned against the Republican president in the heavily Democratic metropolis.

North Korea's aggressive testing of ballistic missiles, security and economic issues are expected to be on the agenda for the leaders' talks, as well as an agreement Turnbull struck with then-President Barack Obama to take up to 1,250 mostly Muslim refugees off of Australia's hands and resettle them in the United States.

The agreement was a source of friction when Trump and Turnbull spoke by telephone shortly after Trump took office.

The conversation made headlines around the world and Trump later tweeted about the "dumb deal." But Vice President Mike Pence assured Turnbull during a visit to Australia last month that the Trump administration will reluctantly honor the agreement.

"President Trump has made it clear that we'll honor the agreement — that doesn't mean we admire the agreement," Pence said when he appeared with Turnbull in Sydney.

White House spokesman Sean Spicer said Trump was looking forward to the meeting and "showcasing the enduring bonds, deep friendship and close alliance the United States has with Australia."

The bonds of friendship between the U.S. and Australia were reinforced during the Battle of the Coral Sea, when both countries' warships and fighter planes battled the Japanese from May 4-8, 1942, forcing the Japanese navy to retreat for the first time in World War II.

Trump and Turnbull were commemorating the 75th anniversary of that battle with speeches at a gala dinner aboard the USS Intrepid, a decommissioned aircraft carrier that fought in World War II and is a floating museum on the Hudson River on the west side of Manhattan. The event is hosted by the American Australian Association.

Manhattan is where Trump made a name by transforming himself from a local real-estate developer into a celebrity businessman and now president. He hasn't set foot in the city since leaving on Jan. 19 to head to Washington to be inaugurated into office the following day.

But Trump's homecoming is expected to be less than welcoming. He received 18 percent of the vote in the liberal city, and protests are planned near the USS Intrepid and Trump Tower, the president's longtime Fifth Avenue home.

During the campaign, Trump would fly thousands of miles back to New York City to sleep in his own bed, leaving the impression that he would make frequent trips home after he became president. But Trump said in an interview last week that he so far has avoided returning to the city of his birth because the trips are expensive for the government and would inconvenience New Yorkers.

"I hate to see the New Yorkers with streets closed," Trump told Fox News. He has received some criticism for spending about half of his weekends as president at his waterfront estate in Palm Beach, Florida.

Hundreds of New York City police officers will secure Trump's appearance aboard the Intrepid, with more standing guard on surrounding streets. A show of force is already a fixture at Trump Tower, where the Secret Service and heavily armed NYPD officers use barricades, checkpoints and street closings to secure the skyscraper where the president has a penthouse apartment.

Trump's wife, Melania, and son Barron, live at the Tower most of the time while the 11-year-old finishes the school year.

The president is not expected to spend the night at Trump Tower, but he could drop in before he heads to his private golf club an hour away in Bedminister, New Jersey.

Under the Obama-era refugee resettlement agreement with Australia, the U.S. agreed to take up to 1,250 refugees — mostly Muslims from Africa, the Middle East and Asia — that Australia houses in immigration camps on the Pacific island nations of Nauru and Papua New Guinea.

Trump campaigned against immigration, including by Muslims, and was enraged by the agreement.