Do you work overtime? Here’s what you need to know 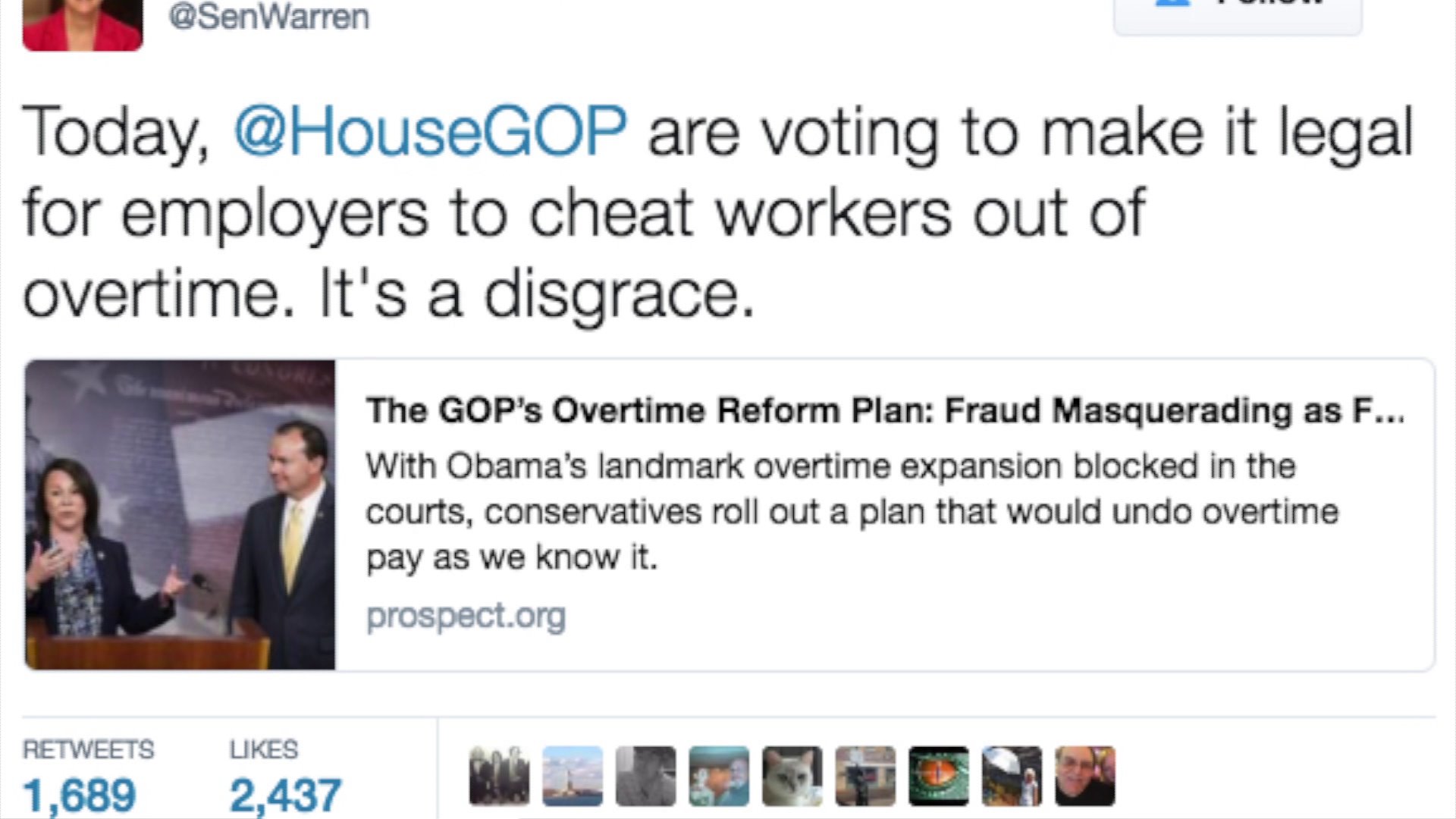 Six Republicans also voted against it.

NEW YORK — If you get paid for working overtime, you can thank President Franklin D. Roosevelt.

He signed the Fair Labor Standards Act into law in 1938. It's the same legislation that sets the federal minimum wage and outlines rules for child labor.

Now, members of Congress are looking to make some big changes.

Here's what you need to know about what's in play.

Overtime pay is the law of the land, for now.

The 79-year-old law currently mandates that certain employees who work more than 40 hours per week must earn time-and-a-half compensation in their next paycheck for the extra time.

Overtime rules don't apply to workers who are considered managers, defined as someone who regularly directs two or more full-time employees, earns a salary of more than $455 per week (or $23,660 per year) and has a say in hiring and firing.

States get a say too.

Many states have their own overtime rules. In these cases, whichever rule would pay an employee the most -- federal or state -- is the one that's enforced.

"The federal government sets the minimum," said Solomon Gresen, a Los Angeles-based lawyer who represents employees in wage cases. "States can add additional protections but can't take them away."

But not everyone is happy with the status quo.

A bill called the Working Families Flexibility Act, backed by G.O.P. leadership, just passed the House on Tuesday. The measure would let employers offer workers paid time off instead of time-and-a-half pay when they put in overtime. Workers have to agree to accept paid time off instead of overtime wages, and would receive an hour-and-a-half of comp time for each hour of overtime worked.

The vote was largely along party lines, with no Democrats voting in favor. Republicans who support the measure claim the bill simply offers workers more flexibility. Employees who want the comp time can take it, they say, and those who need overtime pay can still opt to receive it.

"We can update our laws to allow more choice and fairness in how employees use their time," Rep. Martha Roby of Alabama, the measure's sponsor, said on the House floor Tuesday.

That doesn't mean it will change.

Leading Democrats strongly oppose the bill. They argue that employers will find subtle ways to encourage employees to choose comp time, even though the bill prohibits coercion. And they note that employers have the final say on when comp time can be used, which means bosses can defer compensating employees for overtime work until the end of the year.

This makes for an uphill battle in the Senate, even though the White House has come out in support of the measure.

A number of similar bills have failed over the past two decades to no avail. An analogous bill passed the House in 2013 but died in the Senate.

There have also been efforts to expand the overtime laws

In May 2016, President Obama asked the Department of Labor to "update and modernize" the overtime rules, raising the salary threshold for overtime pay to $47,476 ($913 a week) -- roughly double the level currently in place.

The rules were set to go into effect on Dec. 1, 2016. But last November, a federal judge issued a preliminary injunction after business groups and 21 states sued, indefinitely postponing the change.

The Trump administration hasn't officially said whether it will continue to defend the new Obama rules, but its support is unlikely. The deadline is June 30.