May Day protests, celebrations around the globe 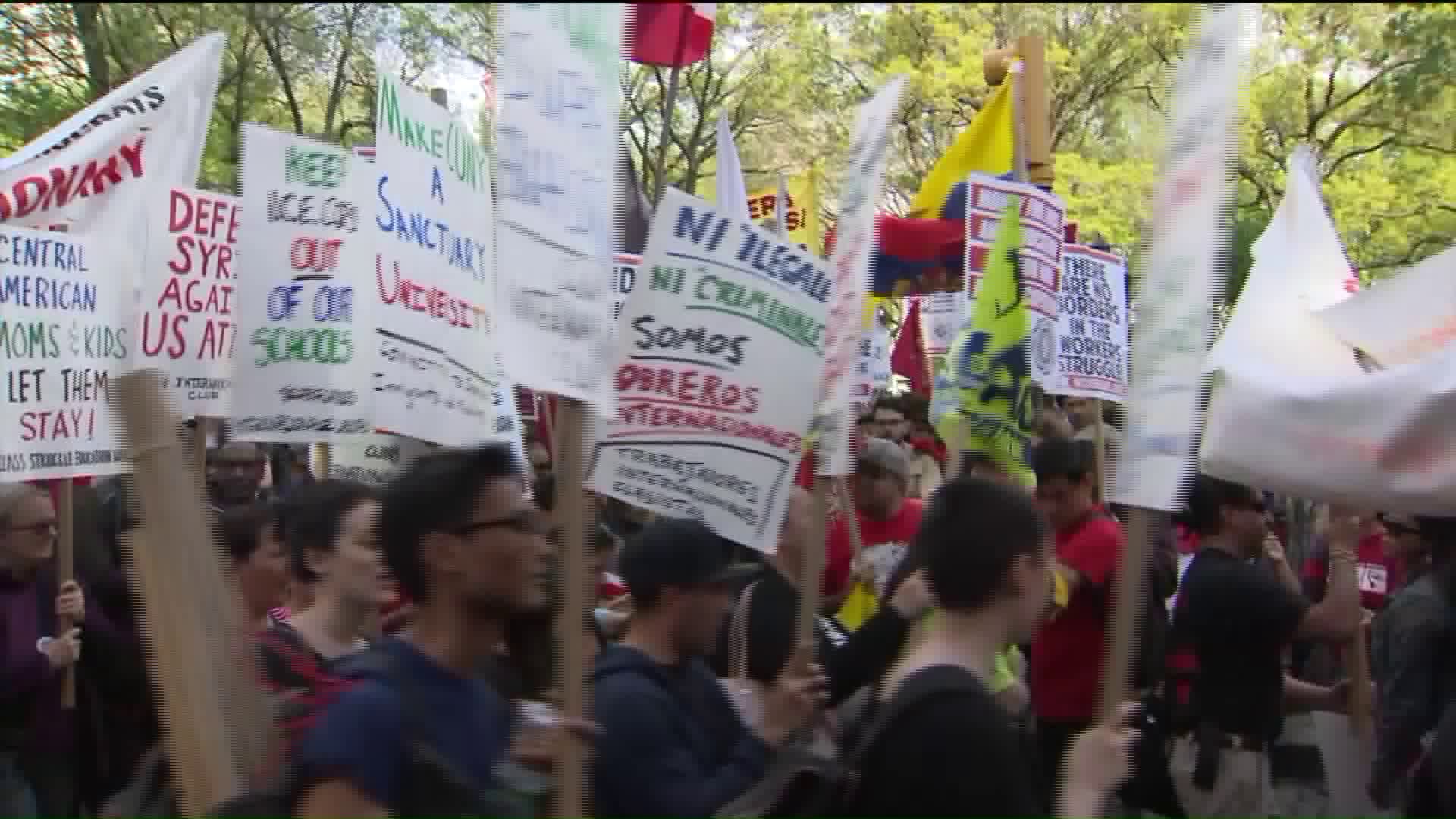 They marched against President Donald Trump`s efforts to boost deportations.

May Day is a time to celebrate workers around the world and the gains made by labor advocates, but it's also a time when police are on high alert as gatherings in many cities are known to get violent.

Though May Day was originally a celebration of spring -- replete with flowers and dancing -- it has, since the late 19th century, become known for labor rallies.

It shares a date with International Workers' Day and from Seattle, Washington, to Jakarta, Indonesia, the line between revelry and protest has been blurred in recent years as some observances have been marred by violent clashes between riot police and protesters.

Here is a look at how people around the globe are honoring May Day:

Video shows police firing rubber bullets and detaining protesters in Turkey's largest city as demonstrations became violent. At least 165 people have been detained during protests, according to the city's police headquarters.

There was a heavy police presence in the major squares across the city. After authorities canceled celebrations in Taksim Square, a traditional rallying point, thousands of protesters gathered in the city's Bakirkoy district. In addition to supporting workers' rights, marchers gathered to support democratic rights, human rights, freedom of expression and rule of law -- rights which are seen to be shrinking in Turkey.

A small crowd of protesters that organized at Grand Central Station in New York marched west near Bryant Park. They carried signs with slogans, some reading, "Every species has a right to freedom" and "We're here, we're queer, we're fabulous." The group then marched Macy's Herald Square and began chanting within the department store.

In a separate protest, a dozen people were arrested outside the Park Avenue office of JPMorgan Chase & Co. for civil disobedience, said New York Police Department Sgt Lee Jones. The protest, dubbed "Corporate Backers of Hate," targets companies who have cultivated ties to President Donald Trump's administration and stand to profit off his policies, said Daniel Altschuler of Make the Road New York, which helped organize the protest.

At least four members of the group, which focuses on workers' rights, were among those arrested.

Skirmishes broke out, and it didn't take long before police fired tear gas at protesters. Reports are emerging that police officers have been injured.

Brazilian tourist Joseane Duque says she and a friend witnessed a police officer hit a man, and she saw tear gas and heard a loud bang.

Artist Mehmet Ali Uysal, who participated in the demonstrations, said they were mostly peaceful, though he saw some violence, including two motorcycles that were set ablaze.

A large crowd gathered in the Cuban capital's Revolution Square, at the base of the memorial honoring writer and poet Jose Marti. A protester with a US flag briefly interrupted the day's celebration and was dragged off by government security officers.

Hundreds of thousands showed up in the Russian capital to celebrate International Workers' Day, according to state-run media. In Red Square, people waved Soviet and Russian flags, as well as banners supporting President Vladimir Putin's United Russia party. "Decent work, wages, and life" is a common theme at the gatherings.

People also took to the streets in Yakutsk, Khabarovsk, Vladivostok, Kazan, Novosibirsk and Salekhard, as well as in Siberia and the Urals and Volga regions, state-run media reported.

Demonstrators focused their ire not on any labor issue but on a January decision to return a cathedral, one of the city's most famous landmarks, to the Russian Orthodox Church, according to Radio Free Europe. Protesters say the church is gaining too much influence and want the cathedral to remain a museum.

Also, according to an Instagram user, anarchists and members of the Russian Socialist Movement marched, chanting, "Our movement is resistance."

A gathering of trade union and student organizations converged outside Georgia's parliament building with a group of women's right activists demanding better working conditions and an end to discrimination, Radio Free Europe reported.

The Union of Independent Trade Unions gathered, demanding the government provide better conditions for private-sector workers, which they said can be regarded as slaves at some workplaces, according to Radio Free Europe.