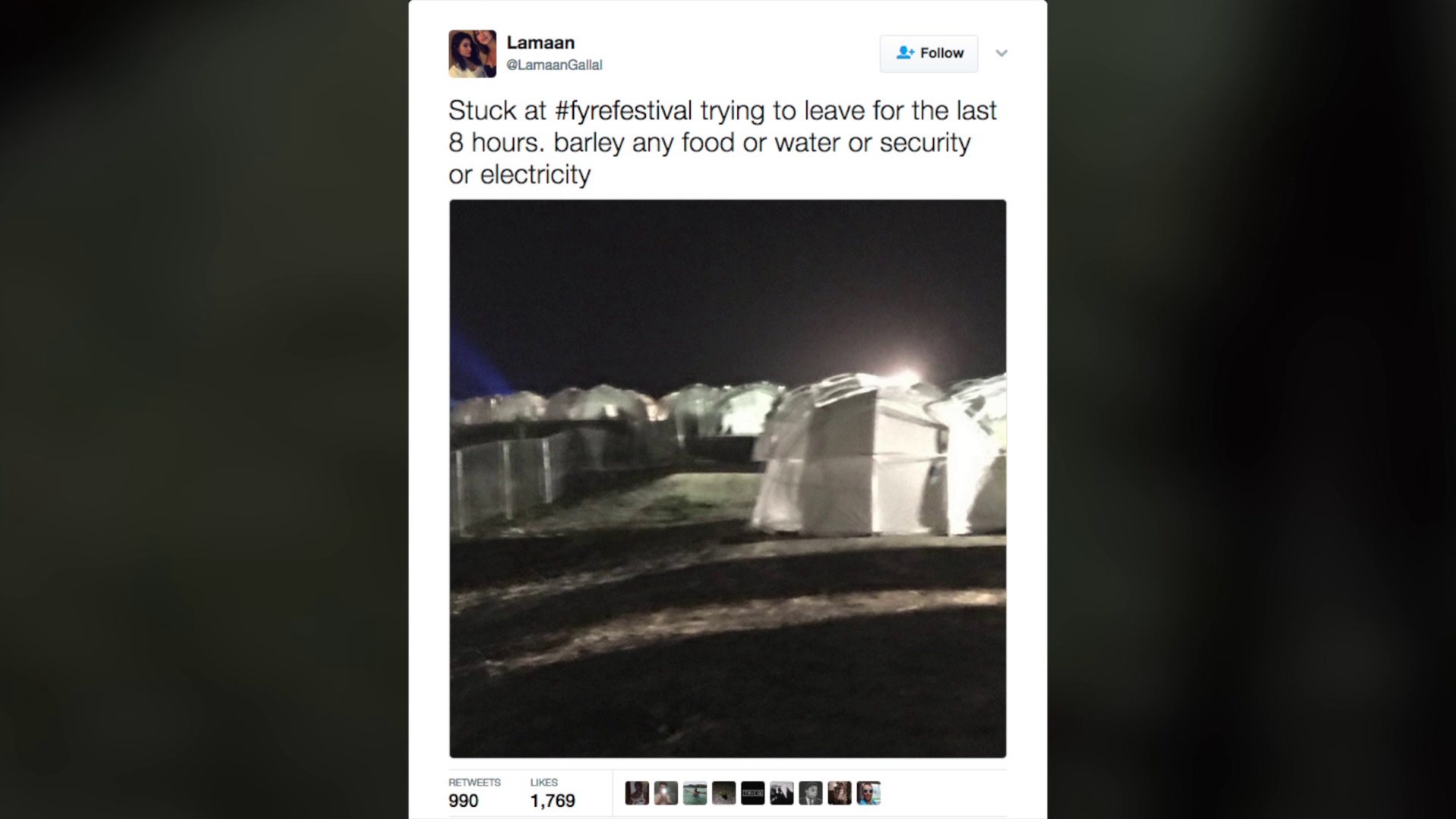 The reality, however, has been anything but.

NEW YORK — When it comes to Ja Rule and his Fyre Festival, "It's Murda" for the rapper.

The star-turned-festival organizer continues to be roasted over the canceled event in the Bahamas that went from advertised fabulousness to fiasco.

Attorney Mark Geragos has filed a $100 million class-action lawsuit on behalf of attendee Daniel Jung against the star (whose legal name is Jeffrey Atkins) and festival co-founder Billy McFarland.

The federal lawsuit filed in central California accuses the pair of fraud and breach of contract.

Attendees were promised a weekend with top-notch music groups and models in bikinis.

Some paid up to $12,780 for what was advertised on the festival's website as "an immersive music festival on a remote and private island in the Exumas" featuring "the best in food, art, music and adventure."

But social media from attendees showed that the organizers didn't deliver and the suit alleges that concertgoers were in danger.

"The festival's lack of adequate food, water, shelter, and medical care created a dangerous and panicked situation among attendees -- suddenly finding themselves stranded on a remote island without basic provisions -- that was closer to The Hunger Games or Lord of the Flies than Coachella," the suit states. "Festival-goers survived on bare rations, little more than bread and a slice of cheese, and tried to escape the elements in the only shelter provided by Defendants: small clusters of 'FEMA tents,' exposed on a sand bar, that were soaked and battered by wind and rain."

The suit also claims that since the festival was promoted as "cashless," attendees were encouraged to load funds onto their Fyre wristbands, which resulted in many lacking the money needed to transport themselves away from Fyre.

"As a result of Defendants' roadblocks to escape, at least one attendee suffered a medical emergency and lost consciousness after being locked into a nearby building with other concertgoers waiting to be airlifted from the island," the suit alleges.

According to the festival's site, "Billy McFarland and Ja Rule started a partnership over a mutual interest in technology, the ocean, and rap music."

"This unique combination of interests led them to the idea that, through their combined passions, they could create a new type of music festival and experience on a remote island," a statement on the site said. "They simply weren't ready for what happened next, or how big this thing would get."

But the rapper has been bearing the brunt of the criticism on social media.

On Sunday, fellow rapper 50 Cent trolled Ja Rule on Instagram, putting up a picture of President Donald Trump at a laptop with the caption "appoint Ja Rule as secretary of festivals."

The same day, Ja Rule tweeted, "Relieved to share that all guest (sic) are safe, and have been sent the form to apply for a refund. Our deepest apologies.."

The rapper had earlier tweeted an apology and said the festival "was not a scam."

CNN has reached out to Ja Rule's rep for comment on the suit. CNN attempted Monday to reach McFarland, a tech entrepreneur, through one of his companies.

The festival's website, in announcing the cancellation, said organizers were "overwhelmed" by the crowd and infrastructure and logistics challenges. All festivalgoers were to receive refunds.