Firefighter Tolley laid to rest, but his daughter, 8, is focus of memorable funeral ceremony 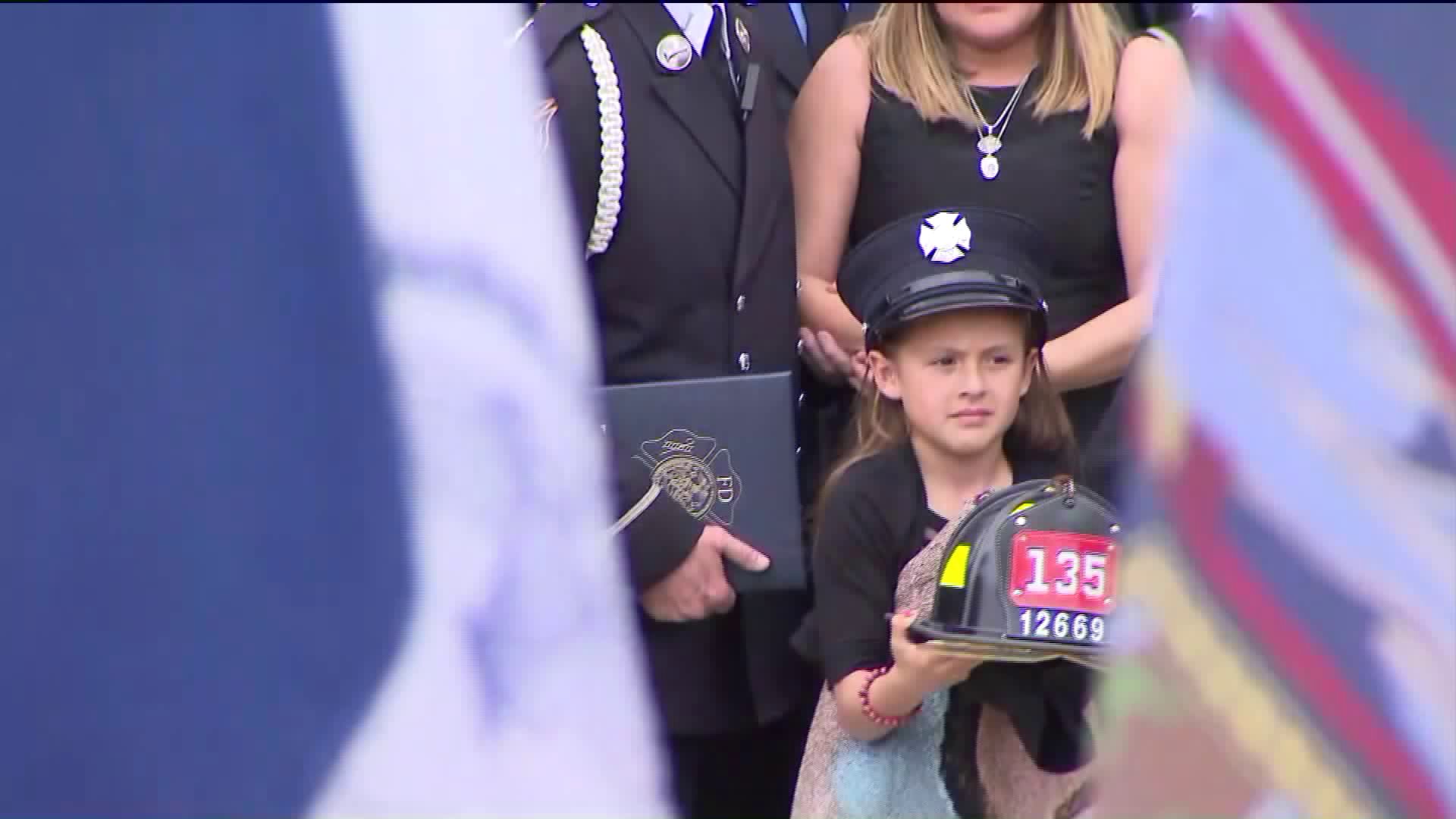 BETHPAGE, N.Y. — Exactly a week after he lost his life in a ladder truck accident, Firefighter William "Billy" Tolley was laid to rest on Thursday in a somber, heartbreaking ceremony.

It was an occasion where the FDNY family paid respects and showed love to the 14-year veteran firefighter's family.

A particular focus of the funeral was Tolley's daughter Bella, 8, who was as central to her father's life as she was to the funeral ceremony.

The service began with a block-long procession of motorcycles passing before the St. Martin of Tours Church. The procession was followed by a motorcade of firefighting vehicles, but the gap between the tributes by the motorcycles and by the fire trucks was many blocks long, leaving the firefighters who lined Central Avenue by the thousands, standing in silence.

For at least seven minutes, nobody spoke, in silent reverence.

The casket carrying Tolley's remains was delivered on a ceremonial fire truck and was carried in to the church by his brother firefighters, who served as pallbearers. Tolley's widow, Marie, and his daughter, who wore her father's FDNY ceremonial hat, followed.

Entering into the church along with them were members of the hard core metal band Internal Bleeding, for which Tolley was the drummer, and with whom he'd toured internationally over the last two decades.

"He was a hardcore rocker," said Mayor Bill de Blasio in his eulogy, "and a firefighter with a baby seat in the back of his minivan."

That double status as a firefighter and a rock band drummer was mentioned repeatedly and fondly in the ceremony, most memorably by Tolley's close friend from his firehouse, Jarrett Kotarski.

"I see a guy at the gym in an Internal Bleeding t-shirt," said Kotarski fondly in his eulogy. He said that he told his fellow gym-goer, "'I know the drummer.'"

After the funeral mass, the family joined city officials in front of the church for the playing of Taps and for a flyover by NYPD and Nassau County Police Department helicopters in formation.

That, along with a sea of deep blue fire department uniforms as far as the eye could see was a tribute to a hero, on a massive scale.

Still, the center point of the entire ceremony was the little girl who Tolley left behind, and who bravely and actively participated in Thursday's service, including accepting her father's helmet, on behalf of her entire family.

"Bella's our little girl now," her father's friend, Kotarski, said about the elementary schooler in his eulogy. He also addressed her directly. "You got lucky, because you're going to have 40 overprotective fathers looking out for you."

In addition to his daughter and his wife, Tolley is survived by his brother, who also gave a heartfelt eulogy during the mass, and his parents.