As ‘Machete Robber’ strikes again, his reputation grows as fast as efforts to nab him 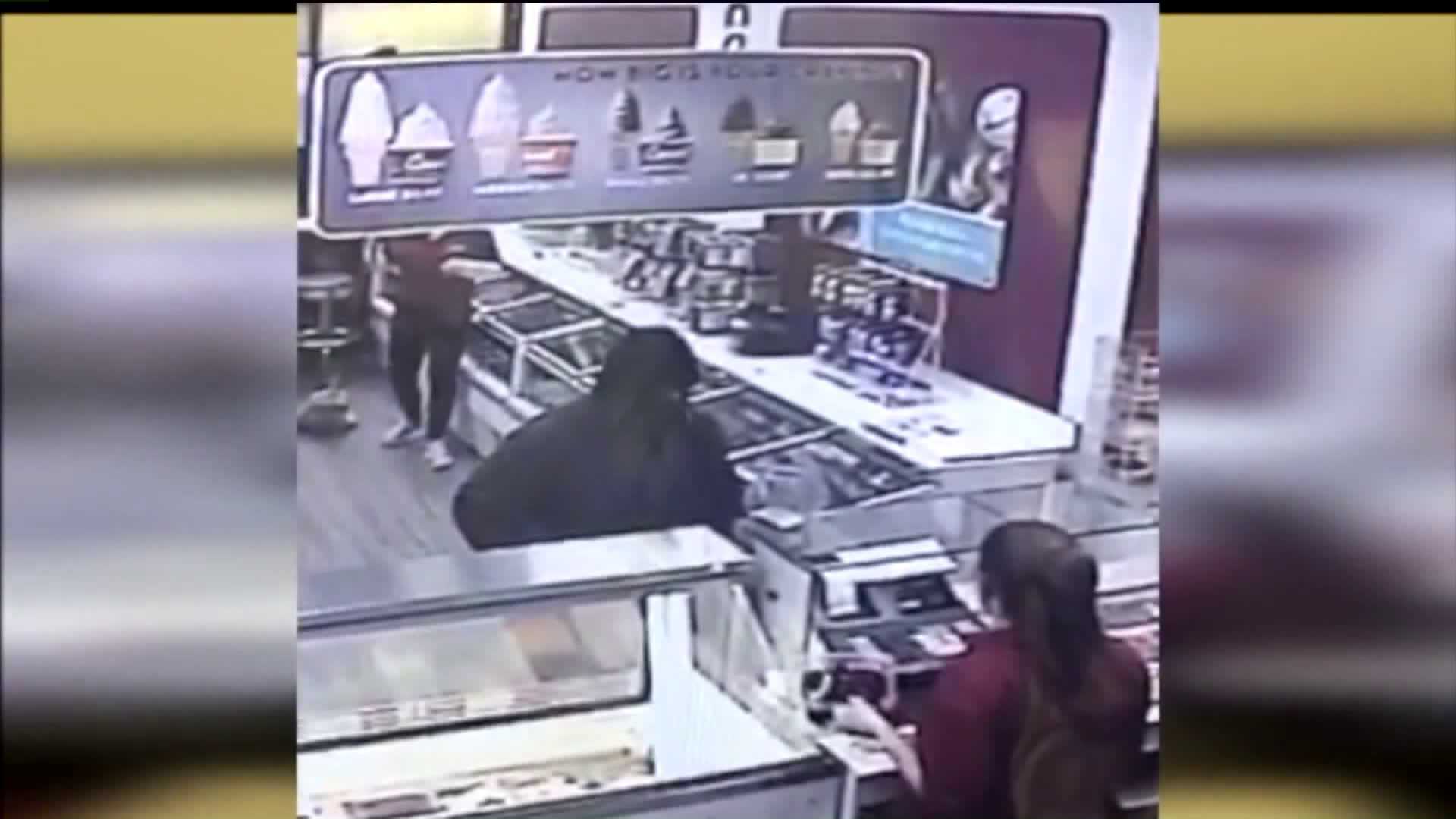 The suspect has been linked to 17 incidents in just two months.

LONG ISLAND — He walks into a shop, pulls out a machete or big knife, demands money from the cash register, gets the cash and leaves.

That's been the pattern for the same robber for two months now.

He's struck twice a week, on average, and now he's carried out his 17th robbery.

It's left many people wondering what it might take to stop him, where he'll strike again, and what can be done to ensure that he doesn't become violent, as the robberies become more frequent and the suspect becomes more bold.

The latest holdup by the masked and hooded, machete-wielding bandit was at a Baskin Robbins here. It took place around 8:45 p.m. Wednesday night, and on Thursday afternoon, loyal customers were on hand showing their support.

Pat Lescik held the owner of the ice cream shop in a long embrace of support as they tried to deal with what had happened.

"It's shock," Lescik said about her reaction to the knifepoint holdup in the store that her friend owns. "They're the hardest working people, they're the nicest people."

Nick Oakley is a clerk at Pets Warehouse, the shop right next door to the ice cream store that was the robber's latest target. Oakley was at work when it happened.

Police say that the same type of robbery, apparently by the same man, has now happened 11 different times in Nassau County and six times in Suffolk County. Numbers like those have workers in small stores, like Nick Oakley, concerned.

"It definitely needs to be stopped soon," he said.

While the so-called machete robber is on the loose, he's the main topic of conversation for many Long Island residents. "We talk about it a lot," said Billy Bascal, a local resident, "because this guy has been doing this for a while, and he knows what he's doing."

Specifically, the suspect has been holding up shops since mid-February.

"I don't know," said a resident who only gave his first name, Joe, "I don't how they can't catch him."

One statistical answer to that comes from a major law enforcement source, quoted by a noted expert in the field. "According to the FBI Uniformed Crime Report," said Joseph Giacalone, a criminology professor at John Jay College, "only about 29 percent of all robberies get solved, anyway."

Giacalone, who's also a retired NYPD detective and the author of the textbook The Criminal Investigative Function, said that despite the statistics that show that most robbers are elusive, catching the machete robber is just a matter of time, thanks to the most important factor in the case.

"The police are going to rely on the public to solve this one," Giacalone said in an interview. "Someone's going to see something, write down a license plate, and that's how this one is going to end."

"Make sure your video surveillance [equipment] is working," Sini said, "and that it's up to date." Some of the shops at which the robber has struck have had surveillance cameras which record somewhat grainy images, making it that much more difficult to identify this suspect.

In addition, Sini said, "we're increasing patrols and we have a team of investigators who are exclusively focused on this robbery pattern at this point."

His department and the Nassau County Police Department are together offering a $10,000 cash reward for information leading to the robber's arrest.

Anybody with information should call 800-220-TIPS (7477). The Crime Stoppers system, which operates that phone number, is completely anonymous.