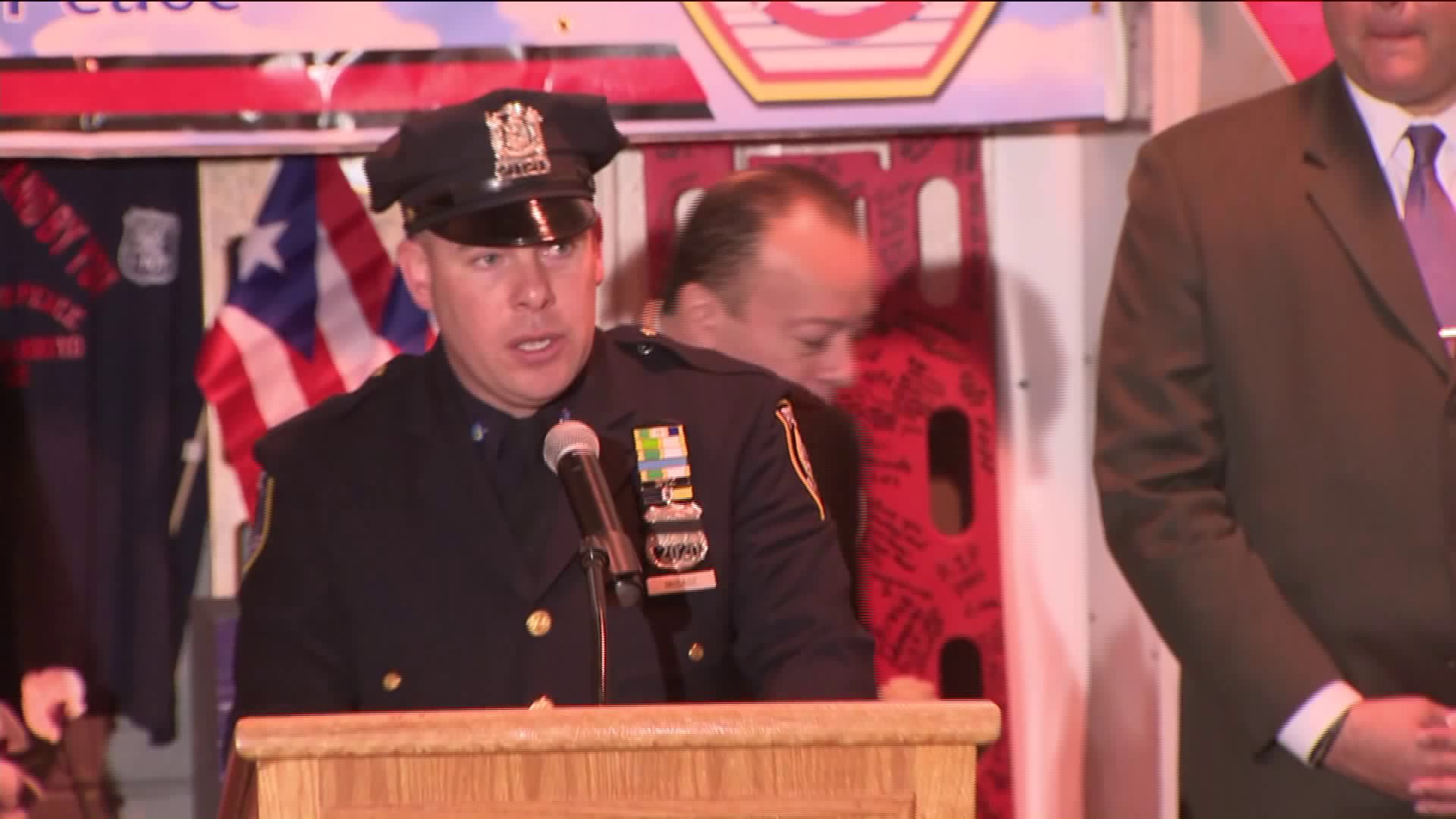 He insists that she`s the true hero

McDade was presented a plaque inside Station 26, where Arroyo worked. A huge turnout was present, including FDNY Commissioner Daniel Nigro and members of the Arroyo family.

"Officer McDade acted bravely just as Yadi did. He stopped a dangerous individual from hurting anyone else," Nigro said.

"Had he not stepped in like that, we might have had a different outcome, other people injured or killed," Nigro said.

On March 16, Yadira Arroyo was driving her ambulance, with her partner, Monique Williams, in the passenger seat. Passersby alerted them to a man riding on the back of their ambulance. They stopped, got out to check, only for the man to allegedly jump into the driver seat at the intersection of White Plains Road and Watson Avenue.

The suspect, Jose Gonzales, who police say was high on drugs, allegedly backed up, running Arroyo over, killing the 14-year veteran.

McDade was heading to an overtime shift. The MTA cop lives on Long Island and normally doesn't commute through the Bronx. Traffic took him that way that evening and he found himself in the middle of the horrific incident.

McDade jumped into action and helped subdue the suspect.

"This is an honor to be here but the true honor and the true heroism goes to Yadi," McDade said.

McDade appeared humbled by the honor. "I'm here today for her, not for me. Every day, I think of Yadi and her family and members of the FDNY. My heart goes out to them. Speaking to all her friends and family, she was an amazing person, it's sad I'll never get to know her," McDade said.

Monique Williams spoke few words today but the emotion of the moment was clear. Williams, Arroyo's partner, hugged and thanked McDade, who likely saved her life and those of countless others that fateful night.

Arroyo lelft behind five sons ages 7 to 23. Relatives on hand on Monday said they are still grieving. They expressed their gratitude to McDade.

"On behalf of our family, thank you, a very small phrase compared to the immense gratitude we feel for your courageous act. You're a hero in our heart and in our eyes. Right now, our family is in complete turmoil, the pain is unbearable. Nevertheless, we acknowledge your heroic act and are very grateful that because of you, who chose not to look the other way, this case did not become a cold case file. God bless you and keep you all safe," said Ali Acevedo-Hernandez, Arroyo' aunt.

Outside Station 26, the black bunting remains, as well as the flag flying at half-staff.

The suspect, Gonzales, has pleaded not guilty. Meanwhile several funds set up for Arroyo's five sons, has grown to over $100,000.