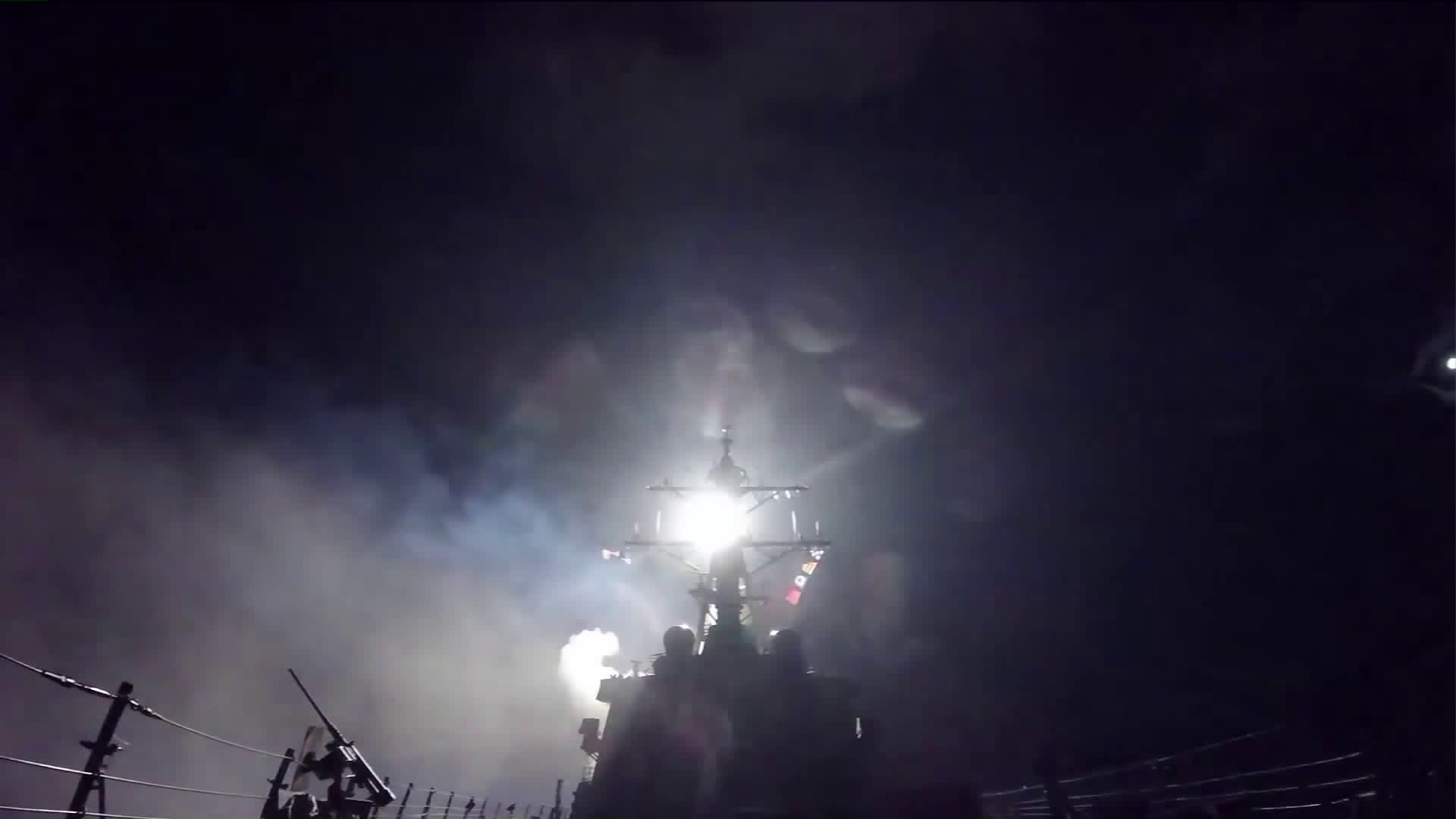 A Manhattan mom whose son is in the military says she`s worried about what U.S. airstrikes on Syria could mean for her son`s future. 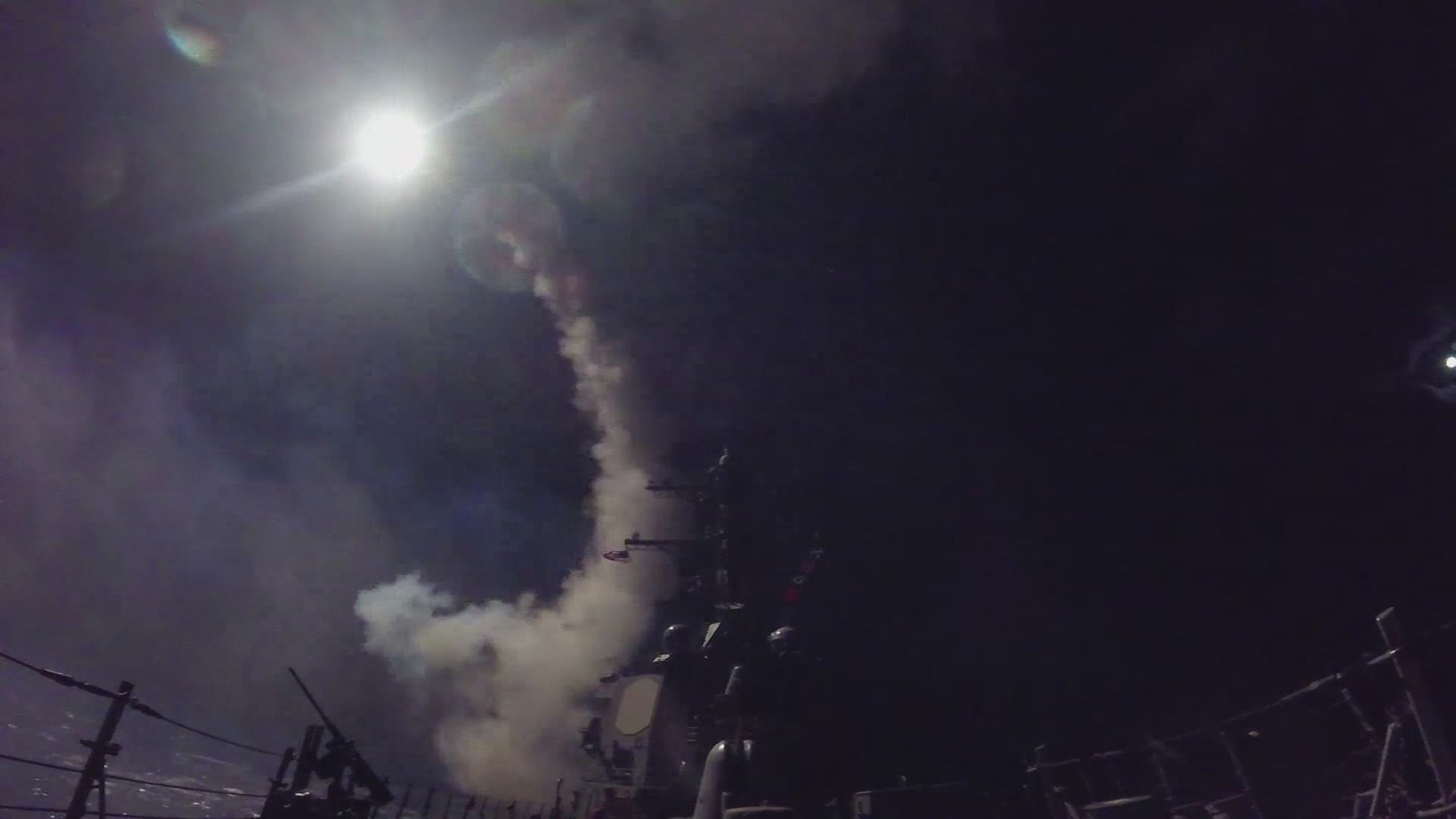 WASHINGTON, D.C. — Three days after a chemical weapons attack killed dozens of civilians in Syria, the US reacted by launching its first direct military strikes against the Syrian regime.

The US launched 59 Tomahawk cruise missiles from its warships in the eastern Mediterranean early Friday, taking aim at the Syrian airbase it believes houses the aircraft that carried out the attack.

But it's not just Syria that uses the Shayrat airfield -- Russia, its key ally, has forces based there too.

What we know about the base

Russia has had forces deployed at Shayrat since late 2015 as part of its current operation in Syria, and has used Shayrat to launch attacks against ISIS in the battle for the city of Palmyra.

Russia uses it as a forward operating base for attack helicopters and has invested a lot of money in updating and upgrading the base, though it has now been severely damaged by the US military.

Despite being warned of the attack in advance, it appears Russia did not deploy surface-to-air missiles, which are capable of taking out US Tomahawk missiles.

The base itself goes back a long way and has been home to a mix of aircraft including Soviet-era MiG 23, MiG 25 and Su 22 jets.

The base also has between 45 and 50 hardened hangars on site.

How much notice did Russia get?

The Russians were given a "very brief notice" prior to the strike on the military base, a US defense official told CNN.

It is unclear if that notice enabled Russian or Syrian forces to evacuate personnel and equipment from the base.

Six people were killed in the strikes, according to Syria, but there are no reports of Russian casualties.

How badly was the base damaged?

Syria's General Military Command said the strikes caused "extensive material damage," and the US official said the initial assessment is that 58 of the 59 missiles "severely degraded or destroyed" their intended targets.

The US official cautioned that this is just the earliest assessment using radar, and that more robust assessments using satellites and other surveillance are still pending.

What we know about chemical weapons at the base

The US also believes that ingredients to produce sarin gas -- suspected of being the type of chemical used by the Syrian regime in Tuesday's attack in Idlib province -- are being stored at the airbase.

US national security adviser H.R. McMaster said measures were put in place to ensure the strikes did not hit "what we believe is a storage of sarin gas."

Pentagon spokesman Captain Jeff Davis said in a statement that the airbase was used to store chemical weapons.

He said that according to the US intelligence community, "aircraft from Shayrat conducted the chemical weapons attack on April 4," and that Friday's strikes were "intended to deter the regime from using chemical weapons again."

However, Russian's Ministry of Defense said only 23 missiles hit the Syrian airbase, with the location of the remaining 36 cruise missiles still unknown, according to state-run RIA.

"US administrations keep changing but their methods of starting wars since the time of Yugoslavia, Iraq and Libya are still the same," the ministry added.

What is Syria saying?

Syrian President Bashar al-Assad said the US had carried out an "unjust and unabashed assault" against Syria that "shows nothing but short-sightedness, a narrowness of vision and a blindness to political and military realities."

Syria's General Military Command said the strikes would undermine counter-terror operations by the Syrian army. They said the US operation "makes the United States of America a partner of ISIS, Nusra Front and other terrorist organizations who -- since the first day of this unjust war on Syria -- have been attacking Syrian army positions and Syrian military bases."

What is Russia saying?

Russia President Vladimir Putin moved to denounce the strikes, labeling them an "aggression against a sovereign state in violation of the norms of international law."

In a statement, the Kremlin said Syria "has no chemical weapons," pointing to reports by UN inspectors, and said the US strikes have "dealt a serious blow to Russian-US relations, which are already in a poor state."

Russia also said that it would bolster and increase the effectiveness of their air defense system in Syria as a result of the strikes.

But retired Major General James "Spider" Marks told CNN that the move was a "political message."

"Russia has very solid air defenses in Syria already ... they might try to thicken it but they've already got capability that's sufficient for the task."