Will NYC invite the ‘Fearless Girl’ to stay on Wall Street? 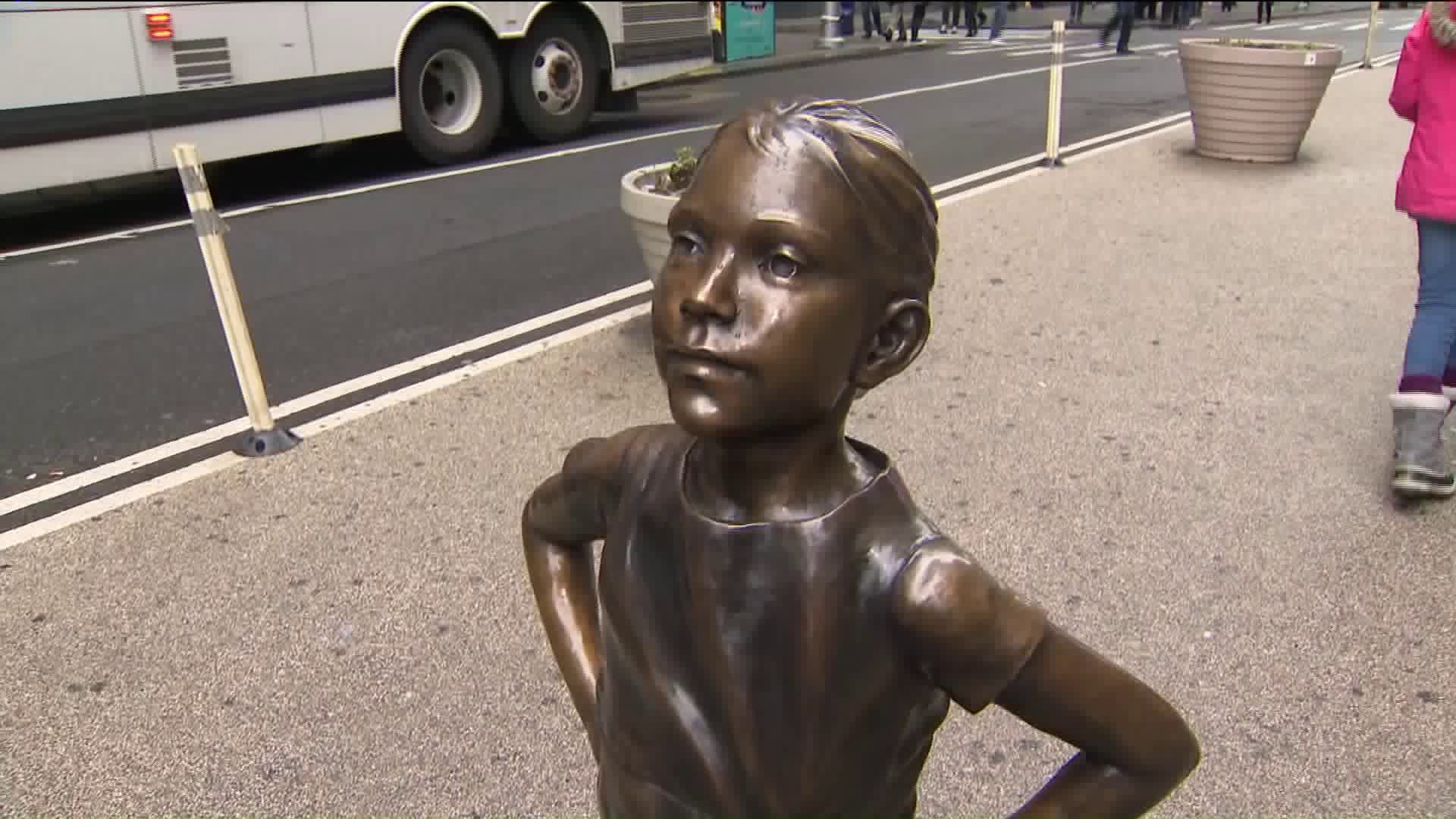 That's the question New York City officials are facing after a statue of a ponytailed girl in a windblown dress went up in front of the bronze bull early this month and immediately became a tourist draw and internet sensation.

What was intended as a temporary display to encourage corporations to put more women on their boards is now getting a second look in light of its popularity, which has spawned an online petition seeking to keep it.

But does keeping the girl past her scheduled April 2 deadline forever alter the meaning of the bull? After all, the 11-foot-tall, 7,100-pound bull has been hugely popular in its own right; it was placed in a lower Manhattan traffic median in the wake of the 1987 stock market crash as a symbol of Americans' financial resilience and can-do spirit.

Some fans of the bronze girl already see the bull much differently.
"The bull represents men and power," says Cristina Pogorevici, 18, a student from Bucharest, Romania, who visited the statues this past week. "So she is a message of women's power and things that are changing in the world right now."

Holli Sargeant, 20, a visitor from Queensland, Australia, says the 4-foot-tall, 250-pound bronze girl "is standing up against something and we see her as a powerful image. She represents all the young women in the world that want to make a difference."

Such shifting perceptions of the bull — from American hero to villain of sorts — outrage bull sculptor Arturo Di Modica, who wants the girl gone.

He dismissed Kristen Visbal's statue as nothing more than an "an advertising trick," noting the bronze was a marketing effort on the eve of the March 8 International Women's Day by Boston-based State Street Global Advisors and its New York advertising firm, McCann.

The girl's sculptor has no hostile feelings toward the bull.

"I love Charging Bull!" Visbal told The Associated Press on Sunday, speaking from her home in Rehoboth Beach, Delaware. "But women are here, and we're here to stay."

She was commissioned to create a 36-inch-tall girl with hands on hips and chin up. "Then we thought, this is a really big bull and we should increase the height to 50 inches," she said. "But I made sure to keep her features soft; she's not defiant, she's brave, proud and strong, not belligerent."

The sculptor based her work on two Delaware children — a friend's daughter she said had "great style and a great stance, and I told her to pretend she was facing a bull." The second was a "beautiful Latina girl, so everyone could relate to the Fearless Girl."

Visbal, who was born in Montevideo, Uruguay, while her American father was in the foreign service, is to be honored Monday along with State Street on the steps of New York's City Hall by a group of prominent bipartisan women who are asking that the statue be made permanent.

A spokesman for New York City, which controls public art in the area, did not say when a decision would be made. Mayor Bill de Blasio has said only that he would try to prolong the girl's presence.

David Levi Strauss of Manhattan's School of Visual Arts, known for his writings about the impact of art on society and politics, says he is excited by the dynamics the girl statue has brought to the space and agrees the overall meaning has shifted.

"The girl has changed the meaning of the bull forever," he says. "With public art like this, you never know what's going to happen; it's a Rorschach test onto which people are projecting their own opinions and feelings."

A similar point-counterpoint was played out at the Vietnam Veterans Memorial, erected in 1982 in Washington, with three soldiers in bronze added two years later, seemingly interacting with the stark marble wall bearing the names of the dead. The result prompted debate; some said the soldiers infused life onto the wall, while protesters blasted the statue as a tasteless intrusion.

When it comes to the girl facing the bull, Strauss said, "the bull's stature diminishes. She's the individual standing up to the beast of power. ... She's frozen in a sort of dream of winning, and that's what appeals to people. She's irresistible."