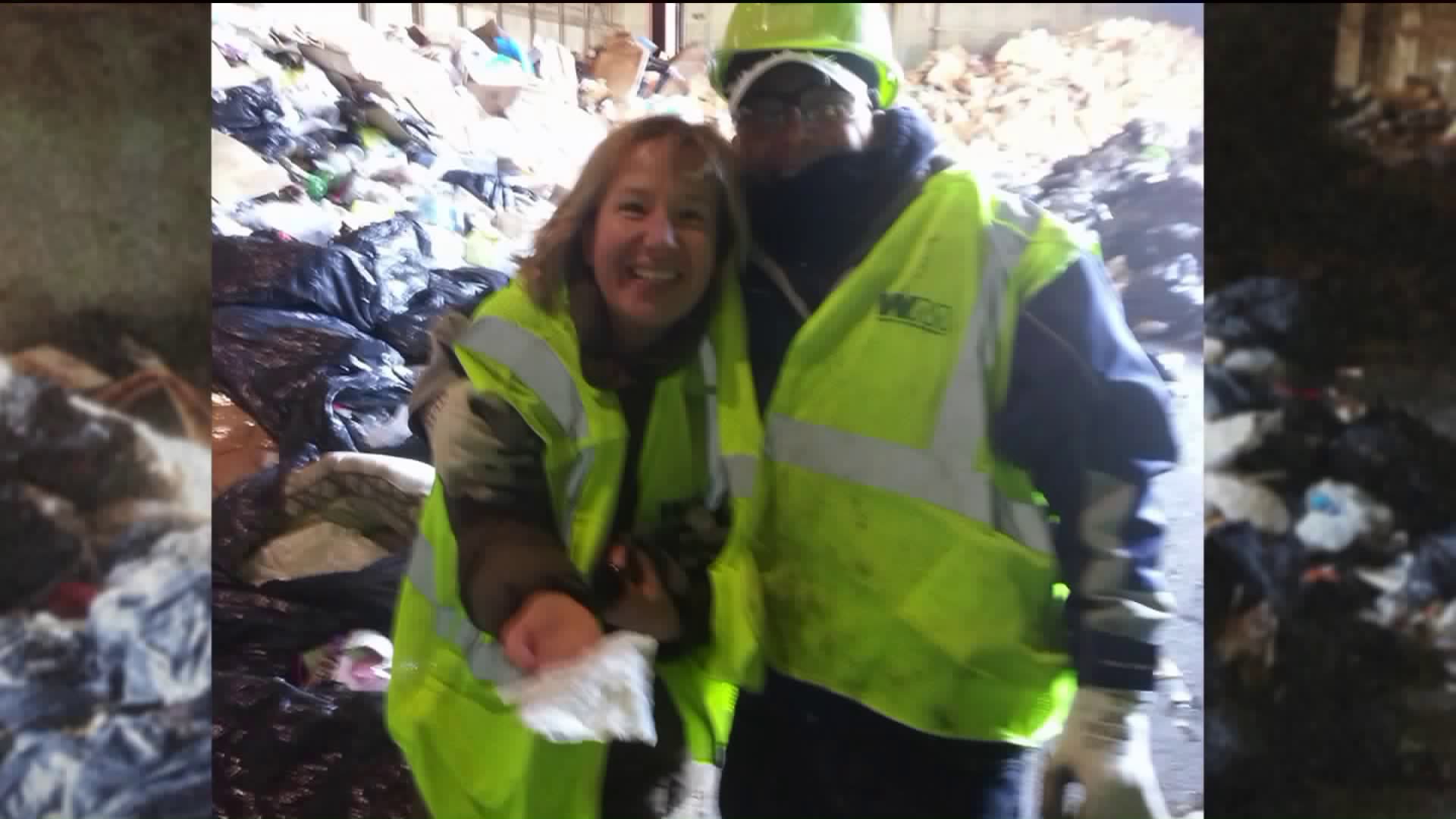 They dug through 800 bags of garbage to find the rings.

UPPER WEST SIDE — Department of Sanitation workers helped an Upper West Side woman find the wedding and engagement rings she accidentally threw away with the trash.

"I was just elated, shocked, then tears and shaking more than anything else," said Shannon Lombardo.

It’s been said one man’s trash is another man’s treasure.

But in this case, not trash and all treasure.

Last weekend, Shannon was cleaning her wedding and engagement rings and like countless times before, put them on a paper towel.

A day later, she realized she misplaced them. With a feeling of huge dread, it sank in she must've accidentally thrown them out, tossed away with a pile of tissues. The garbage bag, already thrown down the chute on the floor of her high rise building.

Her sister encouraged her to call 311. On Wednesday, she did reluctantly at first, thinking it wouldn’t amount to much, but what did she have to lose?

But DSNY stepped up to the plate.

First, they held off trash pickup from her building so she could search through the garbage.

"I went downstairs in our building and went through what was left and realized our bag was not there," said Shannon.

Then, Sanitation was able to pinpoint an area where the trash was taken — a dump in New Jersey — a transfer station.

It was a temporary stop before heading to a landfill.

Shannon and Jim tell PIX11 they were beyond impressed with the systematic way DSNY went about it.

Her call to 311 led to a call to DSNY. The Lombardos said Sanitation's main office coordinated swiftly and efficiently with their teams on the ground. Within a few hours of Shannon's first call to 311, the couple found themselves at the transfer station in Fairview, NJ.

"When you're talking about 21,000 pounds of garbage they sorted through to find a little ring that's a needle in a haystack," said Gabriel Moreno, DSNY supervisor.

With three sanitation employees, including Moreno, Shannon and Jim rolled up their sleeves and got to work in a heap of 800 bags.

"I thought if it was going to be in any one of them, it would be in the most disgusting one and sure enough it was! There were a couple of bags I said if it's in there, it's not coming back home," said Jim with a laugh.

"Lotta dog waste inside bags, outside of bags," added Shannon.

Moreno says in his 17 years with DSNY, he's had about eight instances of what he calls "search for high-value" items.

They methodically went about the search. Knowing the pickup route, DSNY knew which truck the trash from the Lombardos' building was likely on.

Sekou Callender was asked to drive that truck out to the facility in Fairview, where there was room to sift and search. The garbage was slowly dumped from the truck and laid out in several piles. They slashed the bags to look for addresses on discarded envelopes.

Within half an hour, Jim located the trash from their building.

"They kind of did it like they were San workers doing it just like how we were, we got together and knocked it out as a team we were able to find it quick, said Callender.

But no one was more impressed with New York's Strongest than the Lombardos.

"They were in there doing it, never once complained, these people were amazing," said Shannon.

They had only been searching for an hour when, "I opened up the napkin and sure enough there it was, the wife was ecstatic and the husband he couldn't believe we actually found it," said Moreno, who first spotted it.

The Lombardos have two young children. This May, they'll celebrate their ninth wedding anniversary. They said the rings hold special meaning.

"Thank you, thank you from beginning to end, from 311 to the Sanitation Department, to the guys at the dump, they did their jobs and they just cared," said Shannon.