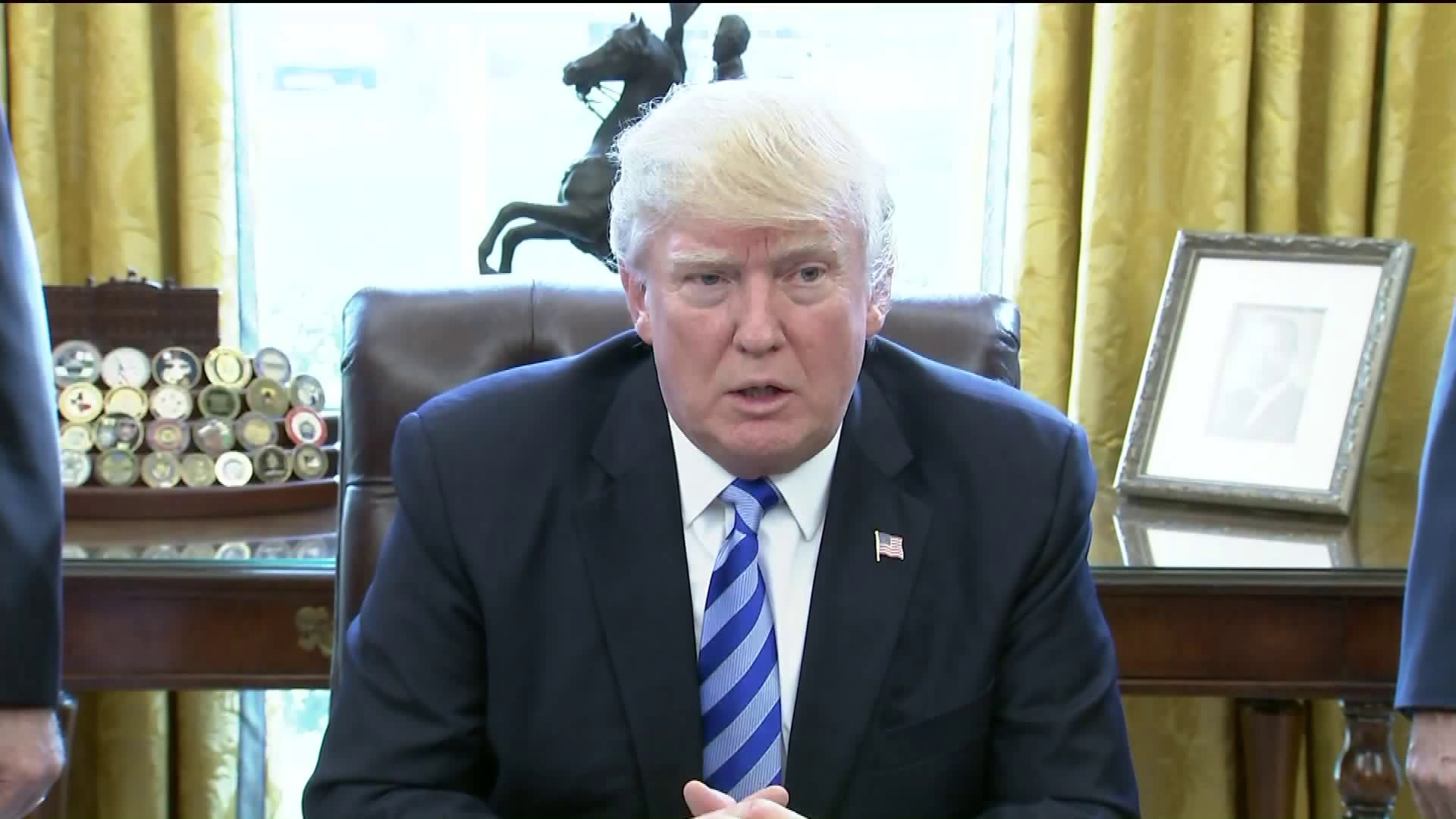 Trump defended the bill in a speech from the Oval Office.

President Trump spoke Friday blaming Democrats for not supporting the bill and said he would be 'open' to tackling health care again if 'Obamacare' law implodes.

Pelosi says of President Donald Trump and the majority Republicans in Congress: "Quite frankly I thought they might have accomplished something in the first few months. They have absolutely no record of accomplishment."

House Speaker Paul Ryan, R-Wis., withdrew the legislation after Trump called him and asked him to halt debate without a vote, according to Ryan spokeswoman AshLee Strong.

After a dramatic day on Capitol Hill, Ryan rushed from the White House to Capitol Hill to tell Trump he did not have the votes to pass the measure, the culmination of seven years of Republican efforts to eradicate President Barack Obama's proudest domestic achievement.

As Ryan presented the dire vote totals in his meeting with Trump, he explicitly recommended the President pull the bill, according to a senior GOP official. The decision was ultimately Trump's. Trump made the call at 3 p.m., as the rest of House leadership was gathering in Ryan's office.

Speaker Paul Ryan says the collapse of the House Republican health care bill means the nation will be "living with Obamacare for the foreseeable future."

The Wisconsin Republican addressed reporters minutes after GOP leaders abruptly shelved the legislation, averted likely defeat for the bill. But it still dealt a damaging setback to President Donald Trump, Ryan and an entire party that has long said it wants to annul Obama's statute.

Ryan says pulling the bill was "a setback, no two ways about it."

The speaker is chiding Republicans who refused to back the legislation for being too inflexible. He says lawmakers must be "willing to give a little to get something done."

Many conservative and moderate Republicans opposed the legislation.

The decision to delay the vote marks an acute embarrassment for Trump, who had gambled big by presenting holdout House conservatives with a take-it-or-leave it ultimatum on Thursday night and put his own credibility on the line.

It also puts Ryan in a much weakened political position, after being defied by his own conference, which seems just as unsuited to governing in the Trump era as it was when it was effectively a protest coalition under Obama.

It became clear during a day of intense political intrigue Friday that despite fierce arm-twisting by Trump, Ryan and other leaders that the votes simply were not there to pass the bill and the leadership and the White House were headed for a lopsided defeat.

They were unable to narrow the schism between Freedom Caucus conservatives, who believe the bill keeps to much of Obamacare intact and moderates who worry they will pay an electoral price if millions of Americans lose health insurance.

The House meltdown on Obamacare repeal has perilous implications for the American health care system, with Republicans apparently unable to repeal the law but also unwilling to fix the deficiencies that the White House says will collapse the law.

Politically, Friday's momentous events will race like wildfire through the Republican Party's conservative, establishment base which has been told repeatedly by candidates that the first order of business with the GOP President in the White House would be the repeal of the Affordable Care Act.

Now the President may decide to go ahead with another priority -- tax reform -- yet the intricacies of that effort may be far more difficult to solve than the GOP divisions over Obamacare.

Before the vote was canceled, White House press secretary Sean Spicer said Friday afternoon that Trump has "left everything on the field when it comes to this bill."

But Republicans had few firm commitments from conservatives and watched a continued exodus of moderates. This was exactly what House leadership was worried would happen when they changed the bill, the source said.

Friday afternoon, moderate Republicans and members of the conservative Freedom Caucus have indicated they won't back the bill.

The decision to pull the bill puts into question the state of Trump and Ryan's relationship.

"I think the speaker has done everything he can," Spicer said. "He's worked really closely with the President. I think at the end of the day, you know I said this yesterday, you can't force people to vote."

But the President is said to be "agitated" by the process, an aide said, which he thinks is all "political."

There have been whispers against Ryan, suggesting that if the bill fails it will inflict a series blow to the relationship between the speaker and the President which will be vital to moving forward the Republican agenda.

The vote was already delayed a day to give Republican leaders a chance to eke out a majority for the bill, is currently scheduled to proceed following Trump's huge gamble in warning he would walk away from health care reform if the GOP did not follow his desires.

Spicer told reporters "you guys are so negative" as they asked about the poor prospects for the vote.

Trump started calling lawmakers early in the morning, Spicer said. "The President and his team have committed everything they can to making it happen."

Ryan needed to get a simple majority in the House -- around 216 votes depending on how many members show up to vote. He can probably afford to lose no more than 21 Republican votes.

Vice President Mike Pence met with members of the House Freedom Caucus at the Capitol Hill Club, a source familiar with the meeting says.

Freedom Caucus members stood by their ideological objections to a bill they say does not go far enough in repealing Obamacare.

There are signs of frustration in the White House at the Freedom Caucus, which has won a series of concession but is still holding out against the bill.

Freedom Caucus Chairman Mark Meadows, R-North Carolina, was mum about his plans. "I'm not making any comment," he said.

A Republican official involved in counting votes said it would need about 25 of the roughly 36 members of the conservative House Freedom Caucus members to back the GOP health care bill if it's going to pass Friday.

But while Mark Meadows claims lawmakers are allowed to vote their conscience, White House and GOP leadership don't think the Freedom Caucus members take that seriously.

The Freedom Caucus traditionally votes in a block and it will be hard to break from that.

Rep. Leonard Lance, R-New Jersey, said that without a doubt, the decision to concede the repeal of essential health benefits to the Freedom Caucus definitely moved some of his colleagues to "no."

"I suspect some became a no because of that," Lance said. "That certainly didn't help."

The northeast Republicans are the ones to watch, he said.

What was in the bill

The GOP health care bill would eliminate many of the taxes and eradicate the individual mandate imposed by Obamacare, officially known as the Affordable Care Act. Instead of the Obamacare subsidies that are tied to income and premiums, the GOP plan provides Americans with refundable tax credits based mainly on age to purchase health insurance.

The bill also significantly curtails federal support for Medicaid and allows states to require able-bodied adults to work. After 2020, states that expanded Medicaid would no longer receive enhanced federal funding to cover low-income adults like they did under Obamacare, and states that haven't expanded would be immediately barred from doing so.

However, the GOP bill doesn't touch some of the most popular pieces of Obamacare, including letting children stay on their parents' insurance plans until the age of 26 and including protections for people with pre-existing conditions. But it would end the requirement that insurers offer comprehensive policies that cover maternity, drugs, mental health and substance abuse.