Off-Broadway’s ‘The Fantasticks’ to close after 21,000 shows 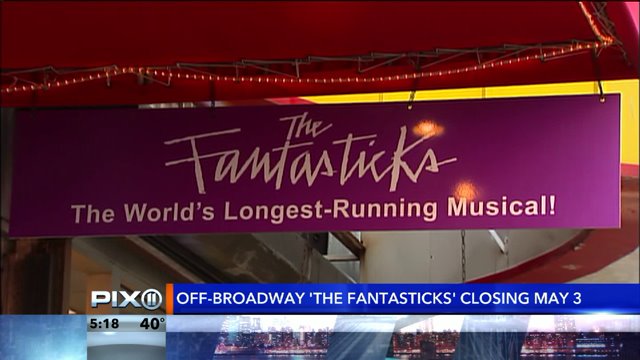 NEW YORK — The off-Broadway phenomenon "The Fantasticks" will end its record-breaking run this spring, bringing down the curtain on a show featuring confetti and a cardboard moon that started when Dwight D. Eisenhower was president.

The musical, which features the songs "Try To Remember" and "Soon It's Gonna Rain," will close June 4, having played a total of 21,552 performances in New York City, producers said Tuesday.

For nearly 42 years the show chugged along at the 153-seat Sullivan Street Playhouse in Greenwich Village, finally closing in 2002 after 17,162 performances — a victim both of a devastated downtown after 9/11 and a new edgy mood. It opened four years later at The Theater Center, an off-Broadway complex in the heart of Times Square, where it will end after a run of 4,390 shows.

The tale, a mock version of "Romeo and Juliet," concerns a young girl and boy, secretly brought together by their fathers and an assortment of odd characters, including a rakish narrator, an old actor, an Indian named Mortimer and a mute.

Scores of actors have appeared in the "The Fantasticks," from the opening cast that included Jerry Orbach and Rita Gardner, to stars such as Ricardo Montalban and Kristin Chenoweth to Oscar winner F. Murray Abraham.

In 2015, producers also declared the show would close that summer but two donors stepped up and pledged to keep the stalwart, low-tech show open.

This time, producers mean business: They've scheduled a new show, "The Crusade of Connor Stephens" by Dewey Moss, to start previews June 17 in the same theater.