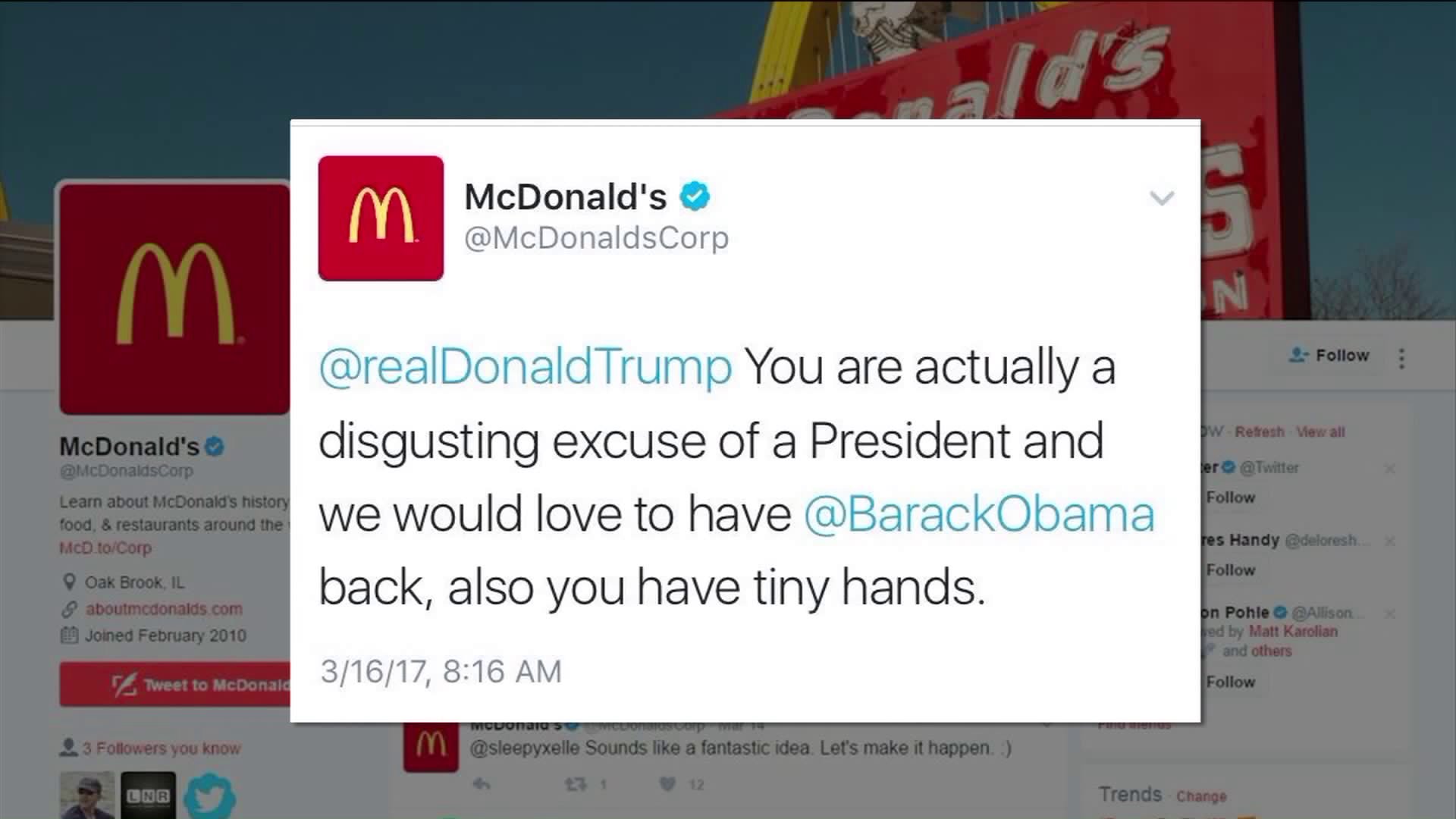 Some joked it was the "Hamburglar."

A tweet was posted on McDonald's official Twitter handle at 9:16 a.m. that criticized the president and compared him to former president Barack Obama.

"@realDonaldTrump You are actually a disgusting excuse of a President and we would love to have @BarackObama back, also you have tiny hands."

The tweet drew hundreds of comments and reactions, with people speculating if it was really a hacker, a disgruntled employee, or the Hamburglar — one of McDonald's cartoon characters — who posted the anti-Trump message.

Everyone will point to the Hamburglar as being behind this. Can anyone account for Birdie's whereabouts? pic.twitter.com/AvNwjqZQFE

@McDonaldsCorp @realDonaldTrump @BarackObama I assume somebody decided to quit their social media job in style.

I knew it... it had to be the Hamburglar 😂 pic.twitter.com/dvvrEBbqMB

Others on social media weren't so Mclovin' about the deleted tweet and called for a McDonald's boycott.

. @McDonaldsCorp @McDonalds You seriously want to go this route? Great!! You are now officially on the #BoycottMcDonalds list!

So @McDonaldsCorp , my #POTUS disgusts you? You disgust #America ! My family is done with you! #MAGA #TRUMP #TRUMP45 pic.twitter.com/VpQZl9YTCY

Some also compared the tweet to the photo of Trump enjoying a bucket of wings from Kentucky Fried Chicken, claiming the president preferred that fast food restaurant over McDonald's.

But Trump has always been a fan of McDonald's and all of the fast-food chains.

“I think the food is good. I think all of those places, Burger King, McDonald’s, I can live with it,” Trump said at the CNN's Republican Town Hall debate last February.

Though Trump said his favorite was the "Fish Delight."

Before Trump became the U.S. president, he appeared in a McDonald's commercial with Grimace, the iconic purple cartoon object, talking about the Big N'Tasty at the Trump Tower.