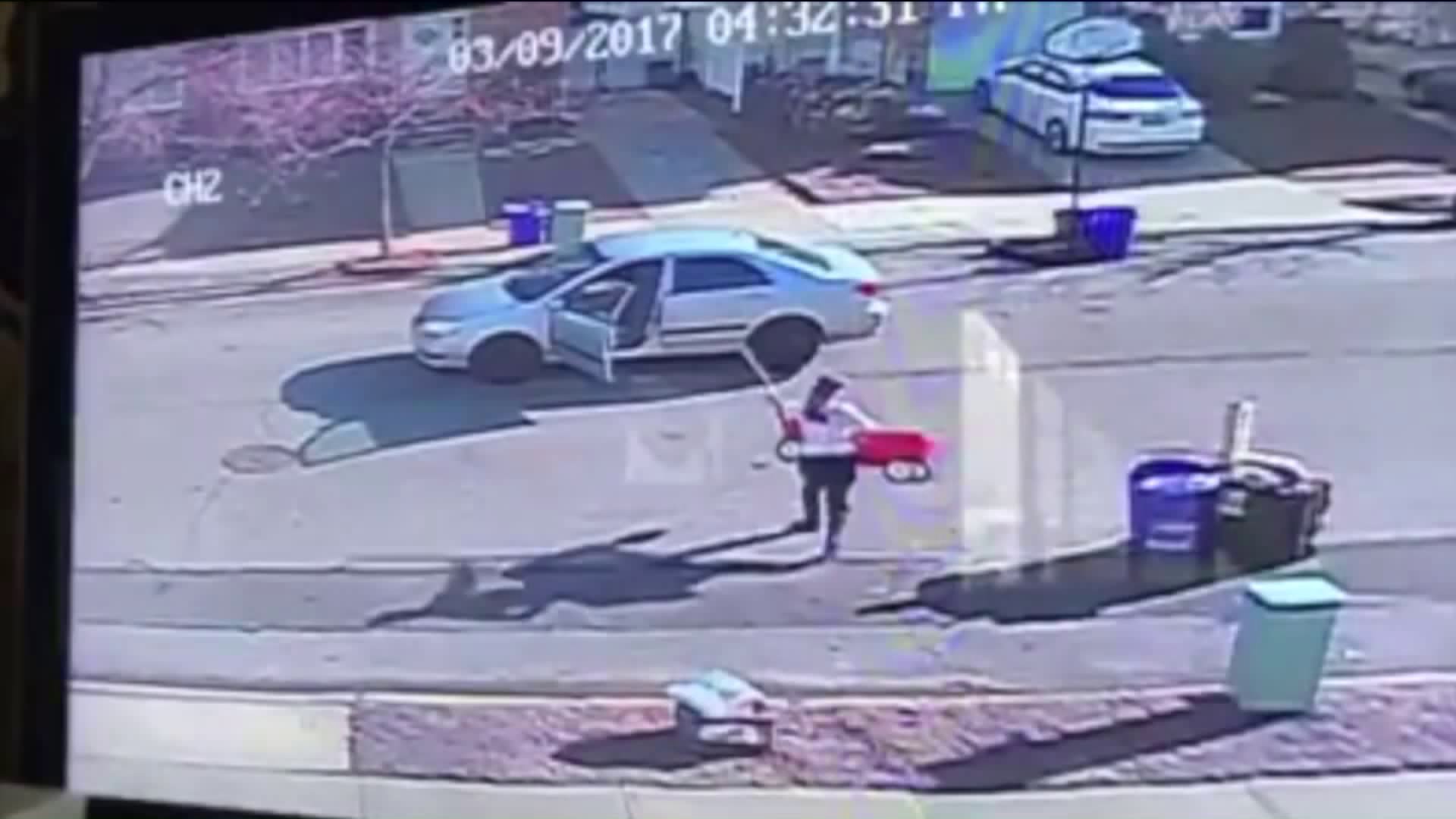 The wagon disappeared after one boy loaded it up then went inside.

ELTINGVILLE, Staten Island — A Staten Island family says a thief was caught on a home security camera stealing their Red Flyer wagon from the front of their house.

The wagon was used by two boys to carry newspapers as they delivered them on their route.

It happened in broad daylight, around 4:30 p.m., last Thursday.

"I was completely shocked I didn't think anyone would do anything like that," said 14-year-old Joey Sala.

"Why do you need it that bad that you have to steal it from someone I just don't get it," adds his 12-year-old brother, Nick.

The Sala brothers can't make sense of it. Why anyone would steal from kids?

The boys and their parents were shocked at what was captured on their home surveillance system.

A woman is caught on camera. She drives by, then slowly backs up her car. She gets out of the vehicle and walks up onto the curb, where the red wagon sits. She brazenly removes the newspapers, puts them on the ground, and then carries the Red Flyer to her car, puts it in the backseat and drives off.

Nick was already out delivering papers on his route, while Joey was getting ready to go out on his.

"I came outside, I loaded up the papers, I was about to go out. I went inside for maybe two minutes, when I came outside the wagon was just gone," said Joey.

Since the wagon was taken, the boys have had to lug around the newspapers.

"Now we have to either take the car with Mom, or walk carrying heavier papers and on mostly nice days, I like to walk," said Joey.

Laura Sala, the boys' mother, posted the video of the thief on Facebook and it's gone viral. As of this afternoon, the post has over 1,000 shares and over 115,000 views.

Some people commented on the post, that the woman may have thought the red wagon was up for grabs. But Laura said she's not buying it.

"I think it's very unfortunate someone would do such a thing and we're hoping in the event it was a mistake that it is returned. I really wish you would just be honest and return it," adds Laura. She said she would gladly take the wagon back, no questions asked.

Laura says if the wagon was returned, she would take to social media once again.

"I would be sure to post that as well that it was happily returned!"

The boys' afterschool job is delivering the Staten Island Advance several times a week to neighborhood residents. Joey has had his route for about a year and a half, Nick, for about a year. Both boys enjoy the independence and earning their own money.

"I just wanted some extra money and not ask my mom and I just wanted to start taking responsibility and paying stuff on my own," said Nick.

The Salas have received an outpouring of support. They've heard from many people wanting to give them another wagon.

"It makes me feel really good that people have that kind of heart to help me out like that," said Joey.

Laura says the incident has been a teachable moment for her sons.

"It's just unfortunate that there are people like that. We just have to move forward and forgive them and just move forward from it."

This story has indeed turned out to be a lesson first, in the bad and now, in the good, of human nature.

This afternoon, four days after their wagon was swiped, the boys and their mom were carrying papers, delivering them on their route, when they encountered a man. He had a red wagon waiting for them.

Along with the wagon, was a note. The note said he is a life-long Staten Island resident, a retired fireman. He wrote he is sorry the boys had to learn at such a young age there's bad in the world.

He hopes by him donating another wagon, they can see there's good as well.