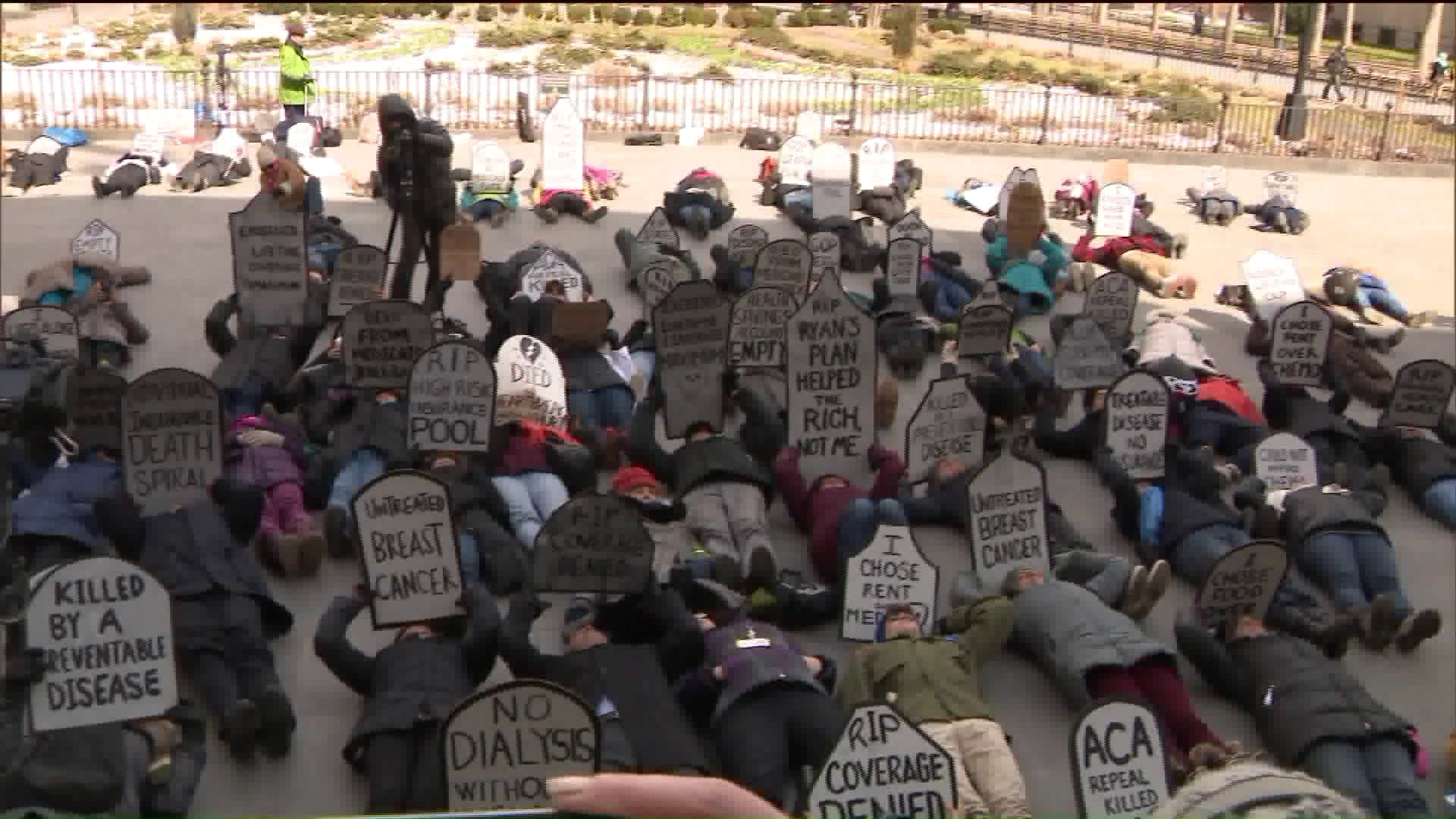 Many people who turned out to the die-in Saturday say they`re against the new plan put forth by House Speaker Paul Ryan to repeal and replace the Affordable Care Act.

BROOKLYN – A die-in was held in Brooklyn on Saturday to help save the Affordable Care Act.

Many people who turned out to the die-in Saturday say they're against the new plan put forth by House Speaker Paul Ryan to repeal and replace the Affordable Care Act. This is happening around the same time President Trump delivered his weekly address, promising better health insurance plan for all Americans.

Cohen wants the Affordable Care Act to stay the way it is.

"I didn't have insurance for a long time, then I finally did because ACA …several months later I found out I had stage three cancer … was able to get chemo which put my cancer in full remission," Cohen said. [If it] wasn’t for the ACA I would have been very broke and wouldn’t be here today.”

The cancer survivor was one out of over a hundred Brooklynites out in the cold Saturday for a die-in at Brooklyn Borough Hall, saying they don’t want the Trump administration to repeal and replace the current healthcare law.

"I'm on Medicaid so I'm scared," Kathy Malone said. "My son is also on Medicaid."

"I'm here for my patients and all my patients depend on Medicare under the Affordable Care At," said nurse practitioner Elizabeth Jones, member of the NY State Nurses Association. "I just can't stand by while Congress is threatening to cut the very thing that keeps them alive."

"We fought hard too long... we will fight eery single day," Velazquez said.

"Repealing the Affordable Care Act is a simple matter of life death for tens of thousands of Americans," Lander said.

Today’s die-in  comes after house republicans put forward a new three-prong plan that promises to expand choice and lower costs. And while it’s facing criticism from Democrats and some Republicans  –  it has already passed a couple of committees in the house. On Saturday morning, during President Trump’s weekly address, he slammed the affordable care act, promising a better health-care plan for all Americans.

“Americans were promised that Obamacare would bring premiums down $2,500 for a typical family," Trump said. "Instead, they've gone up by more than $4,000. Americans were promised that Obamacare would increase competition and provide them with more choices. Instead, the number of plans to choose from has plummeted - and I mean plummeted. This year, Americans in nearly one-third of all counties have only one insurer to choose from on the exchanges - or, in effect, no real choice at all."

“Through seven long years of botched rollouts, soaring costs, cancelled plans, and bureaucratic mandates, Americans have called out for relief," he said. "And relief is what we are determined to give them. I want every American to know that action on Obamacare is an urgent necessity.”

“I feel bad for the millions who may possibly lose their insurance," Cohen said.

Those who do not want to see the affordable care act go say they will keep fighting.