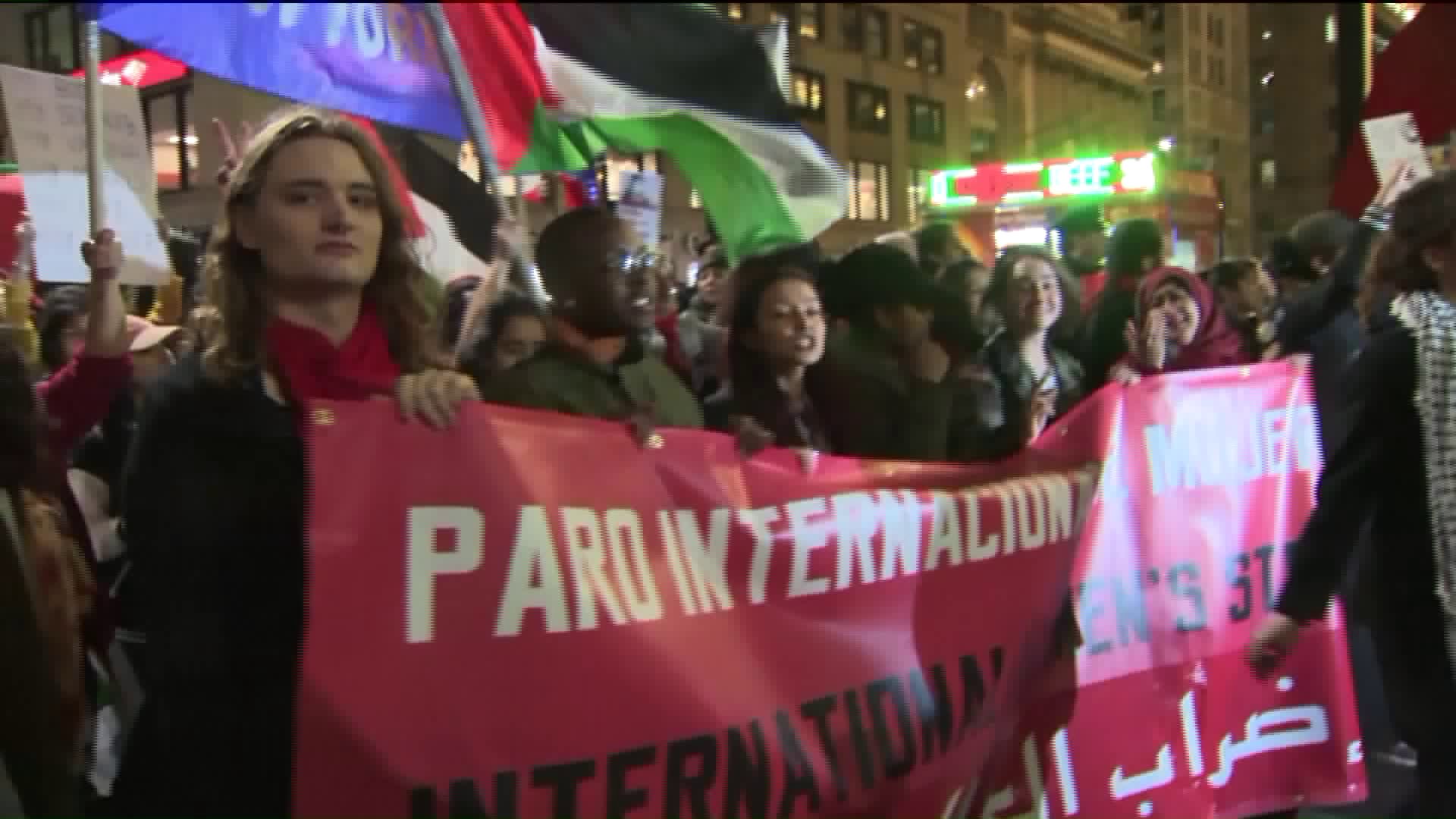 NEW YORK – The crowd at it's peak was 5,000 women and men strong. The one in New York – just one of the hundreds of rallies taking place across the country in honor of International Women's Day.

The day took an added meaning this year because it's the day for the organized strike movement "A Day Without a Woman." The effort is a show of solidarity to highlight the indispensable role women play.

Supporters encouraged women to take the day off from work if possible, to wear red and to not spend money except to shop at small, women and minority-owned businesses.

One business who gave their female employees the day off is popular Lower East Side bar "The Wren."

The bar was devoid of women. Only males were working because all 19 female employees were given the day off, with pay by their boss.

"It means so much to me it means so much to all the female employees. Women have held every role here at The Wren from owner to social media to server to host," said Sophie Bruschi, events manager for the bar.

Bruschi organized a group to head to the rally. PIX11 was there as the women made their signs and marched from The Wren to Washington Square Park. Owner mark Gibson says he didn't have to think twice about the paid day off.

"When Sophie came to me about the day off, I thought there could be a way we could make a larger impact," Gibson said.

"There has always been a huge female presence here at The Wren and we wouldn't be able to do what we do without them," added Gibson.

"The women who work here do so much. And it's hard to take the place of a woman's touch but we'll try to make it work!"

Gibson, who is married with two little girls, says it's a shame there even needs to be a Women's Day to highlight the problems and that issues like pay and gender inequity should not exist.

The first rally was held in Columbus Circle. Then at four in the afternoon, another rally was held Washington Square Park. A large group then marched down to Zuccotti Park, a symbol of movement and change after the Occupy Wall Street protests several years ago.

The same people who organized the Women's March in Washington in January planned "A Day Without a Women" for today which is also annual International Women's Day.

Many say they participated to lift women up and were fueled by the present political climate.

"The current administration is trying to take us back to a point in history an America we should not be proud of," said Sarah Manning, who was at the rally in Washington Square Park.

The march from Washington Square Park passed symbolic points like Stonewall Inn, which was lit up with a sign "Women Strike." It also passed the Soho hotel owned by President Trump. It ended at Zuccotti Park just after 9 p.m.

"Getting involved and coming out and showing you care, that's how you can make change," said Stephanie Stein at Zuccotti Park.

Although the rallies were largely female, PIX11 encountered many men participating as well.

The marches were relatively peaceful. But 13 women were arrested outside Trump International Hotel in Columbus Circle.