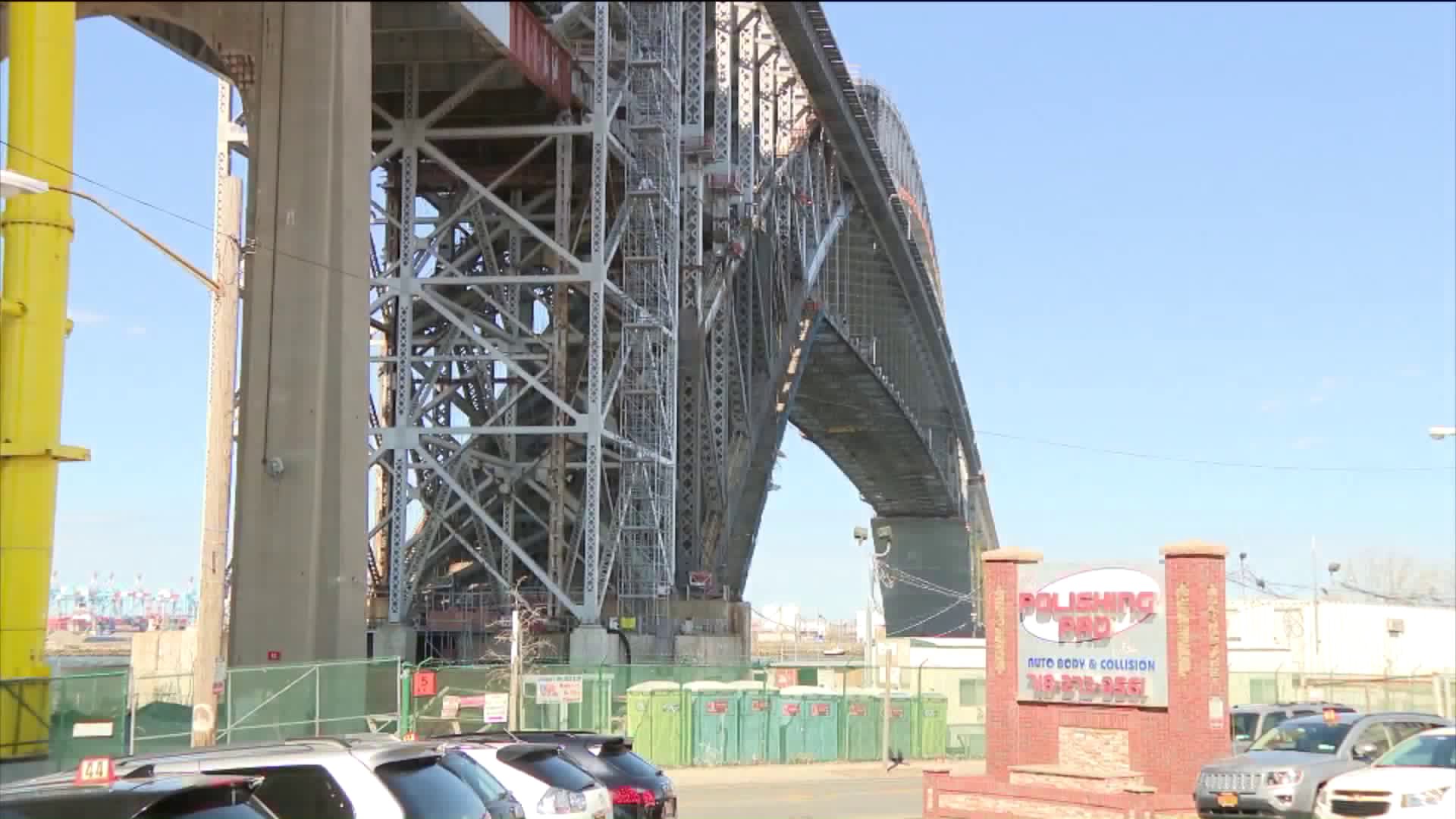 Glue, rocks, and metal are falling onto residents` property.

The ongoing construction is leaving Staten Island residents with little to celebrate.

People who live or work under the Bayonne Bridge say falling debris from construction on the bridge is damaging their property and posing a threat to their safety.

"Debris falls off the bridge, cement, concrete, epoxy, sealant, now tools, poles, circular discs off light towers, it's endless," said Vaughn Bellocchio, as he gave us a rundown of what he's showered with.

Bellocchio has owned The Polishing Pad, an auto body shop on Newark Avenue, for 25 years and says the problem has only been in the last four years, when construction began on the bridge.

The $1.3 billion project is to raise the deck on the Bayonne to accommodate larger cargo ships to pass beneath.

Bellocchio says the debris is falling on the freshly polished and repaired cars on his lot. Construction dust covers the cars and there have been instances when it's more serious, causing significant dents and dings on the vehicles.

Bellocchio also points out epoxy, a glue-like substance, on his storefront signs and on the street. He also shows us oil stains, a metal cap and a metal pole. These are objects he claims fell from the bridge — and he's not alone.

"We don't let the kids come out to play cause we don't know what will fly off of here," said Ronald Puzo.

Newark Avenue in Port Richmond is also a residential street.

Puzo is one of those residents and showed us the lead paint chips scattered on the ground.

His neighbor down the street, William Williams, points out his damaged siding.

"I actually have wood falling off, paint falling off, cement, it's like wet cement comes off like rain," said Williams.

Williams filed a claim with the Port Authority of NY & NJ for his siding. He says it's due to debris from the bridge.

The Port Authority determined it to be pre-existing damage. But Williams says it's tough to even breathe the air.

"I wont open the window, knowing that anything that comes off goes straight into the house," adds Williams.

Bellocchio has filed numerous claims with the Port Authority to be reimbursed for damage. He's received about $50,000 so far in settlement, but says he has suffered more than $50,000 worth of damage.

The Port Authority has settled several of his claims, dismissed one and others are still pending.

Some of the Newark Avenue residents tell PIX11 the process to file a claim is so painstaking, they avoid it.

The Port Authority says they have a 24 hour staff to listen to complaints and issues.

They also say claims are generally resolved within 33 days after having been filed, which Bellocchio says is untrue, based on his experience.

Bellocchio is also asking for a net to catch objects that fall off the bridge but the Port Authority says that's already part of their plan.

Bellocchio and his neighbors also fear when the old portion of the bridge is finally demolished, even more debris will rain down on them.

"Help, please help. I'm about to close the doors I think it may be better to retire now and send my 14 employees home than to have to bury somebody," said Bellocchio.

The Port Authority of NY & NJ provided this statement to PIX11 News.

"The comprehensive safety plan at the Bayonne Bridge project includes requirements to tether tools and materials at the construction site; to conduct routine safety checks in advance of high winds, and remove or secure items that are present; and to use tarps and/or netting when certain types of work are performed. Personnel also work as spotters to ensure safety underneath areas where work is performed.

The Port Authority welcomes residents and business owners to report any instances in which they believe their property was damaged due to the “Raise the Roadway” project. All damage claims are referred to a third party administrator, who will initiate an investigation the same day the claim is received. Claims are generally settled approximately 33 days after having been filed."

In terms of its positive impact, the $1.3 billion “Raise the Roadway” project supports approximately 2,800 jobs and $240 million in wages throughout the construction industry.