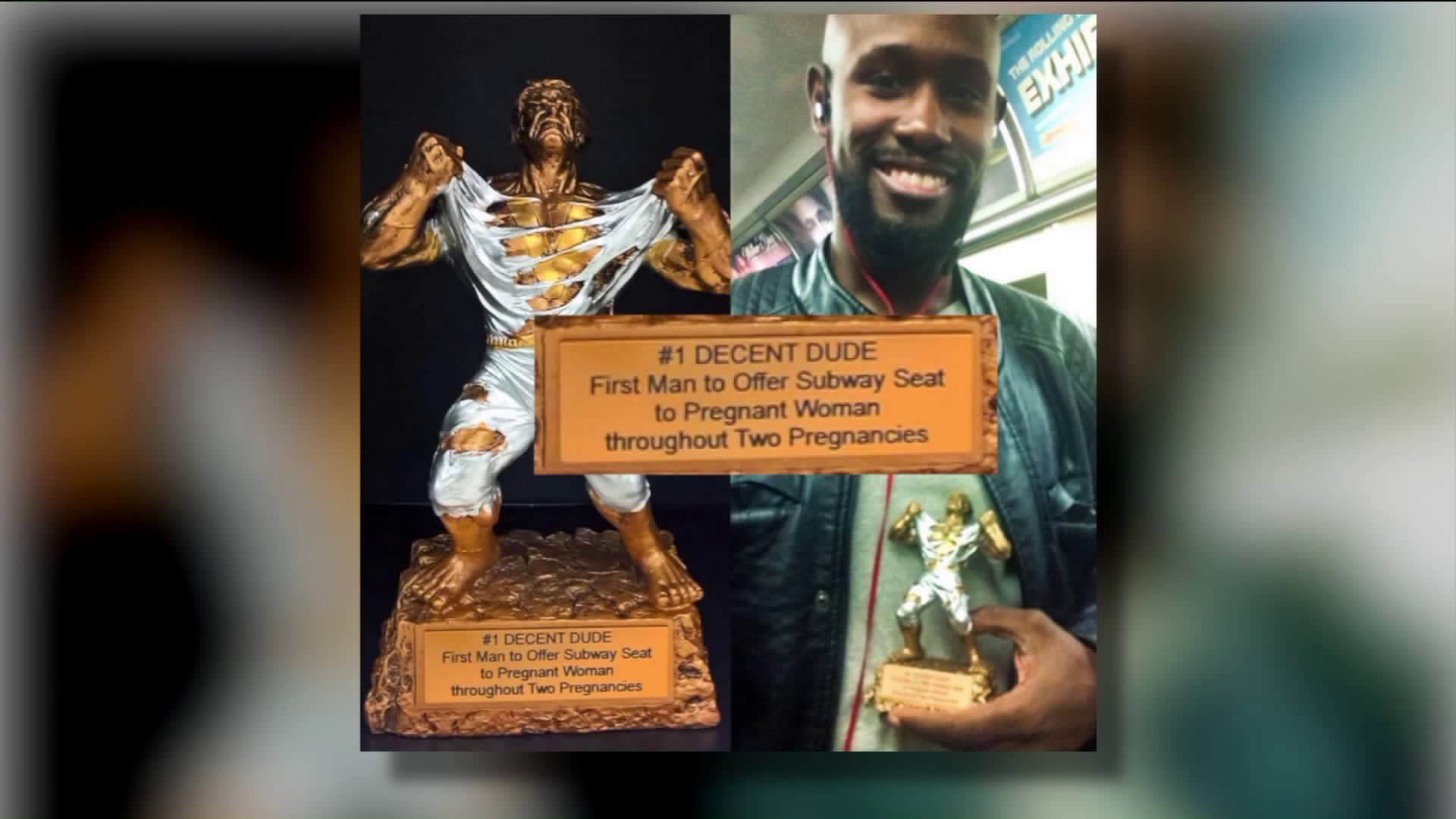 It`s the "#1 Decent Dude" Award. Yvonne Lin, who`s 8 months pregnant, had it customized on the internet and carried it around for about a month before Ricky Barksdale offered her his seat.

NEW YORK — It's hard to be pregnant on the subway.

Yvonne Lin knows this all too well. She's 8 months pregnant, but just two weeks ago marked the first time a man offered her his seat on a train -- and she awarded the thoughtful stranger a "#1 Decent Dude" award for it.

Lin, 38, said she began this social experiment a little more than two years ago when she was pregnant with her first child.

"I live in Washington Heights and work in Downtown Manhattan, so the commute is close to an hour each way," Lin told PIX11 News.

The designer realized she was spending a lot of time on the subway. So in her third trimester, she starting taking notice of who would offer her their seat on the train.

"I tried to make myself look as pregnant as possible," Lin said.

She would wear more "form-fitting" clothes, or outfits that would accentuate her baby bump.

A few weeks into the experiment, she said she realized it was mostly women offering her their seats. No men.

That's when Lin took it a step further. She started carrying around a "Congrats" card to give to the first man who volunteered his seat.

But that day never came.

Now pregnant with her second child, Lin is trying the experiment again.

"Since it was a long time coming I needed to up this thing," Lin said with a laugh.

She commissioned a small trophy of a man ripping off his shirt. She called it the "#1 Decent Dude" award.

Finally, two weeks ago, she met her first "decent dude." She was 8 months pregnant.

"I had this made and I've been carrying it around everyday — till last Friday. This guy is the winner!" Lin posted on Instagram with a photo of the trophy and the man, who has been identified as Ricky Barksdale .

I'm about 8ish months preggers (again) and I look it. I've been gradually coming to the conclusion that men suck. I didn't get a single subway seat offered to me by a man throughout my first pregnancy. In contrast, women tend to be awesome and notice the people around them. So for the second pregnancy, I had this made and I've been carrying it around everyday - till last Friday. This guy is the winner! #subway #nyc #pregnant #socialexperiment

Lin said when she pulled out the small trophy out of her backpack, Barksdale had an "adorable rom-com, 'I don't know what to say' reaction."

Barksdale saw Lin's Instagram post when a friend recognized him and tagged him in the photo. Turns out, Barksdale had been in the military for eight years, was a mixed-martial artist and also an actor.

Barksdale told PIX11 News he initially didn't see Lin on the train, but when he looked up and saw she was pregnant, he got up and offered up his seat because, "that's the way I was raised."

Lin said she expected to get hate mail for her experiment, but said the response has been more positive than she'd anticipated.