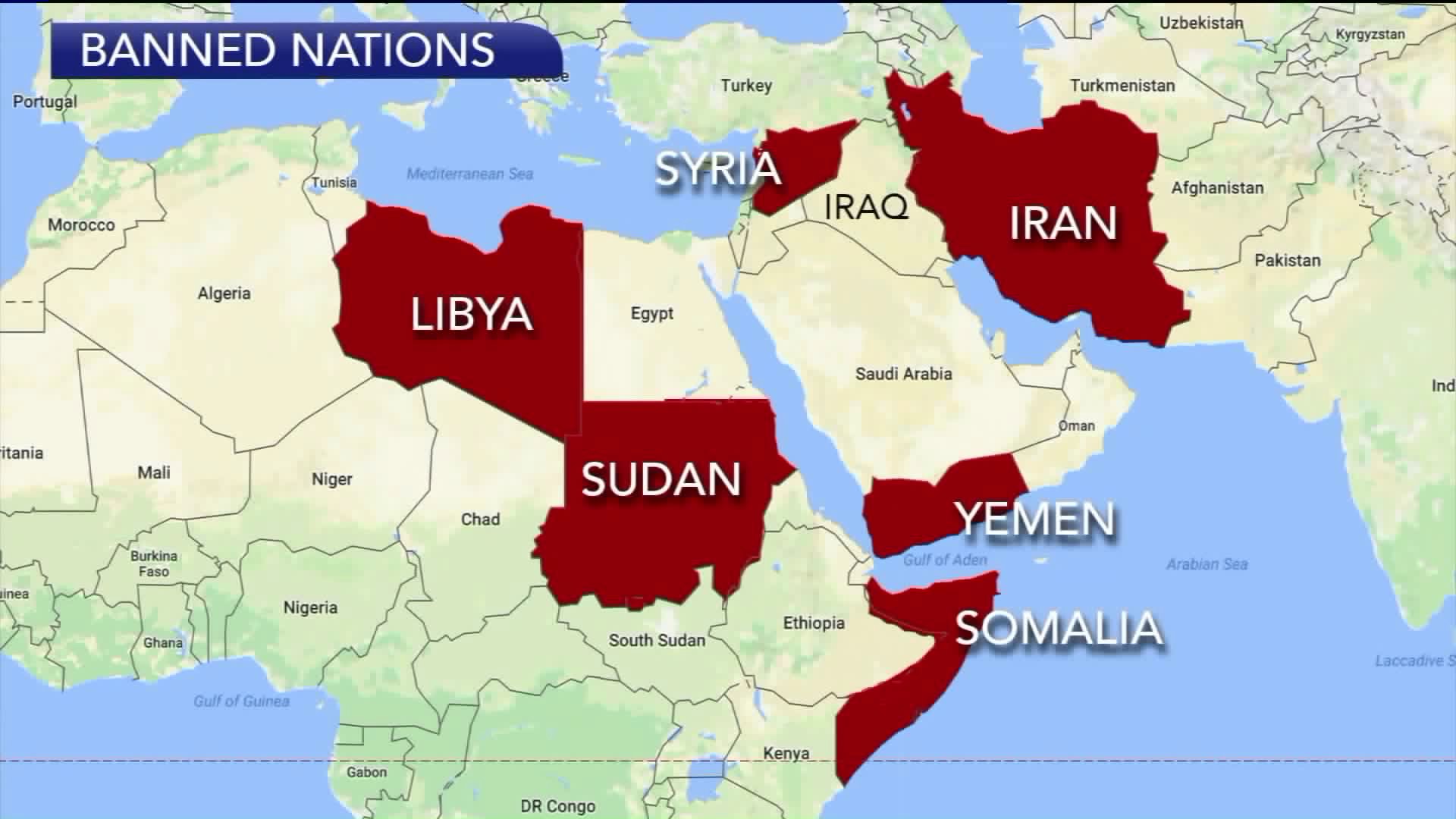 But what’s life like for people in those six nations? For many, conflict, human rights abuses and long-term unemployment are the norm, and are reasons to flee or try to immigrate.

Here are snapshots of the situation in each country:

There is perhaps no country in the world today as desperate as war-torn Syria. Millions have been affected by the conflict that has raged for nearly six years, with an estimated 400,000 people killed. Many of the displaced are now hanging onto life by a thread, braving freezing temperatures in makeshift shelters with little food and clothing to get by.

The brutal conflict has triggered an exodus of refugees from Syria, most of them heading for Europe. The Obama administration had set a goal of accepting 10,000 Syrian refugees last year, which it had done by August.

The Syrian conflict broke out in 2011 with the Arab Spring uprising, but rebel groups’ attempts to overthrow President Bashar al-Assad’s regime have been fruitless. The conflict has allowed ISIS to flourish, with the militant group taking control of Syria’s city of Raqqa as its capital, taking control of a belt across the country and into Iraq.

A US-led international coalition has carried out airstrikes in the country against ISIS, but the Syrian regime and its most powerful ally, Russia, have also pounded parts of the nation from the air, reducing areas like eastern Aleppo to rubble. Civilians there have lived under bombardment for years.

Life is also grim for many living under ISIS rule. Women complain they are forced to wear burqas. People are forbidden from smoking, and men are forced to grow their facial hair, while access to the rest of the world through television, the internet and mobile phones are largely cut off.

Now as a ceasefire deal is being hammered out, Syrians are nervously watching to see what will come next for their country.

Iran's oil-reliant economy had been hit hard by decades of economic sanctions, contributing to the country's high levels of unemployment.

Sanctions were first imposed by the United States in 1979 following the Iranian revolution and the seizure of the US embassy in Tehran. But more sanctions, including by the US and the UN, were later imposed over the country's nuclear program.

Iran was considered a pariah state by many Western powers, but that changed when Tehran agreed to restrict its nuclear program in a deal crafted by the Obama administration. The deal has seen most of the sanctions lifted, loosening the noose on the country's economy and allowing foreign investment to pour in.

While Iran appears to be getting back on its feet economically and politically, rights groups say the country is still autocratic in many ways and life is difficult for minority groups, women and the political opposition.

Iran is an Islamic theocracy, where the people vote in their representatives and president, but Shia Islam is constitutionally the official religion, which guides the nation's political decisions.

Amnesty International said in its 2015-16 country report for Iran that authorities had severely curtailed the rights to freedom of expression, arresting and imprisoning journalists, human rights defenders, trade unionists and others who voiced dissent.

The report said torture and other ill-treatment of detainees remained common, as were blinding, amputation and floggings as punishment. And women and members of ethnic and religious minorities faced pervasive discrimination in law and in practice.

But Trump's temporary travel ban on Iranians is likely to rock the country's relationship, which has only just begun to recover after decades in the doldrums.

Yemen's civil war broke out more than two years ago, yet it is very much a "forgotten war" as the world focuses on Syria, where conflict rages on a larger scale.

But the two wars bear some resemblance -- dozens of schools and hospitals have been bombed, foreign powers have carried out deadly airstrikes, political chaos has created a vacuum for militant groups like ISIS to flourish and sieges have cut off rebel-held areas from desperately needed aid.

Harrowing photographs of children wasting away from starvation have emerged, painting a grim picture of life in a conflict much ignored.

UNICEF reports that 1.5 million children are currently malnourished in the country, 370,000 of them severely.

The conflict began in early 2015, when Houthi rebels -- a minority Shia group from the north of the country -- drove out the US-backed government, led by President Abdu Rabbu Mansour Hadi, and took over the capital, Sanaa. The crisis quickly escalated into a multi-sided war, which allowed al Qaeda and ISIS -- other enemies of the Houthis -- to grow stronger amid the chaos.

Yemen has perhaps received less attention from the West than Syria because its people struggle to flee -- many Yemenis are too poor to pay the people smugglers who can get them out, and they do not have the proximity to Europe that the Syrians have.

Yemen is by many measures a failed state -- its economy is failing, making it easier to recruit fighters, the World Bank reports, showing an economic contraction of more than 28% in 2015.

"Prior to 2014, Yemen was facing challenges on several fronts that have been exacerbated by the conflict -- high population growth, severe urban-rural imbalances, food and water scarcity, female illiteracy, widespread poverty, and economic stagnation," the World Bank said.

Five short years ago, Libya was one of the wealthiest and most stable nations in Africa. The country had been led by Colonel Moammar Gadhafi for more than 40 years after he seized power in a 1969 coup, and its 6 million citizens enjoyed the benefits of the country's vast oil wealth.

As the Arab Spring took hold in 2011, Gadhafi was eventually toppled and summarily executed. But his removal only created a political vacuum, and no stable government has taken his place since.

Years of political uncertainty allowed ISIS militants to gain a foothold in the country, drawing the US into another conflict.

ISIS found a stronghold in the coastal city of Sirte -- Gadhafi's hometown -- where Al Qaeda had failed to do so several years earlier. The group was finally swept out of the city in December, but the US continues to strike ISIS targets in the country.

Earlier this month, US B-2 bombers struck and destroyed two ISIS camps in Libya, with initial estimates that over 80 militants were killed, US officials told CNN.

Helping Libya's recovering oil sector was also a likely factor in the US decision to target the training camps, according to Geoff Porter, president of North Africa Risk Consulting.

"Targeting Islamic State training camps in the Sirte Basin consolidates the oil production gains made in the last two months and reduces the risk that they will be targeted by the Islamic State again in the future," Porter told CNN.

Now, three self-styled "governments" are vying for power, as multiple tribes compete for influence and a slice of the country's dwindling oil wealth.

One of the world's poorest countries, Somalia descended into civil war after dictator Siad Barre's ouster in 1991.

Now, after two-and-a-half decades of conflict, much of the country's governance structure, economic infrastructure, and institutions have been destroyed, the World Bank reports.

In 2012, a new government emerged, but warring tribes and extremist groups, such as Al-Shabaab, were able to flourish during the more unstable years. Al-Shabaab grew in size and strength over the subsequent years, carrying out attacks against government and military targets, recruiting child soldiers for its cause.

While Al-Shabaab has seen its power wane in recent years -- thanks in part to an African Union coalition dedicated to peacekeeping in the country -- Mogadishu is still subject to frequent attacks.

On Wednesday, 21 people died in twin blasts in the country's capital Mogadishu.

Government security forces, African Union troops and allied militias have been responsible for indiscriminate attacks, sexual violence, and arbitrary arrests and detention, the group said, adding that restrictions on access to aid organizations have exacerbated the humanitarian crisis there.

Sudan's development has been beset by ongoing conflicts, most notably the Darfur conflict, which began around 2003 when several rebel groups took up arms against the government in Khartoum. They fought over land and historical marginalization, which still continue today.

In response, the government's counterinsurgency strategy targeted the opposition groups but reportedly expanded to target tribes associated with the insurgents.

The violence escalated into a war, and in 2008, the UN estimated that 300,000 people may have died in the Darfur conflict, although experts say that figure has likely risen since then.

Sudan's President, Omar al-Bashir, was charged with crimes against humanity by the International Criminal Court, including genocide, related to the Darfur conflict in 2010.

But the conflict is not entirely over -- the Sudanese government was accused last year of using chemical weapons against the people of Darfur, according to a report released by Amnesty International, which said the attacks may constitute a war crime.

The government dismissed the allegations as "rumors."

Sudan has also faced pressure from conflict in South Sudan, which seceded from Sudan in 2011.

More than 100,000 people have sought safety in Sudan since mid-October 2014, the World Bank reports, and an additional 7,000 people fled across the border after fighting broke out in the South Sudanese capital, Juba, in July 2016. More continue to arrive on daily basis.

"The unequal allocation of public resources and access to natural resources are main drivers of conflict, feeding into a potent mix of ideology, ethnicity and socio-economic marginalization that threatens to pull the country further apart," the World Bank reports.