The Kellyanne Conway photo: Why experts and New Yorkers reacted so intensely 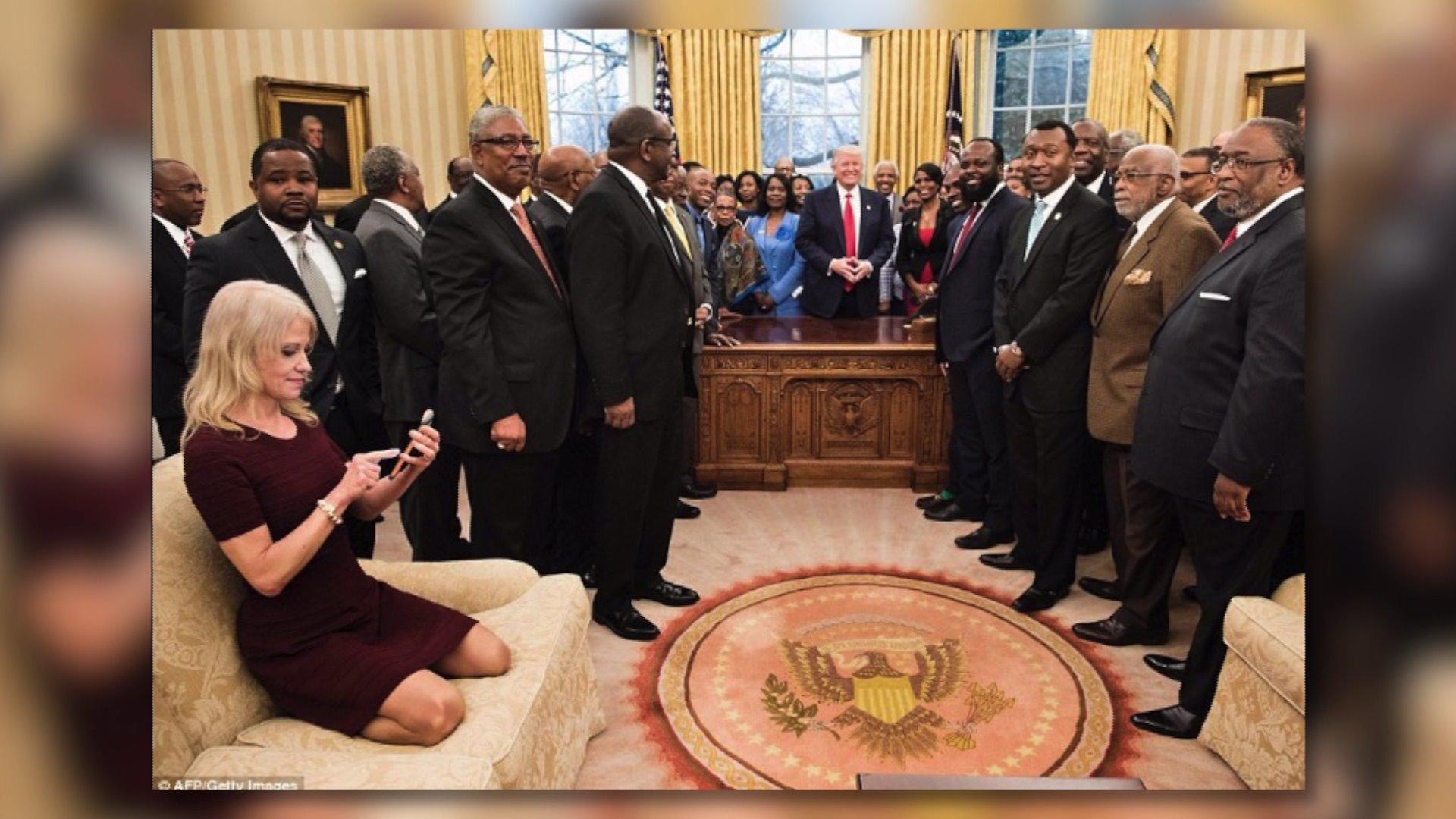 The photo has taken social media by storm.

NEW YORK — It's the image that's taken social media by storm: Kellyanne Conway, counselor to President Donald Trump, kneeling on an Oval Office sofa with her shoes on the fabric. Standing around her were a large group of presidents and chancellors of historically black colleges and universities meeting with President Trump.

Whether this is a case of much ado about nothing, righteous offense or even outrage over disrespect for the office depends on whom you ask.

However, among New Yorkers that PIX11 encountered in an unscientific survey, the reaction to the image grew stronger the more they looked at the photo.

The image has gotten so much attention on social media that for most of Tuesday, two of the Top 10 searches on Twitter were related to the activity in the picture. Conway was captured in the photo on Monday taking photos herself of the HBCU administrators while kneeling on the couch.

The reactions on social media were swift and intense.

"Did no one's mama tell Kellyanne Conway to take her feet off that damn taxpayer-funded couch?" tweeted Mathew Rodriguez.

"I am sorry ma'am, but no shoes on the couch" from @darth just begin the seemingly interminable list of tweets and memes that are all over social media.

The issue, however, is about socializing properly, said Rosa McLeish, founder of the New York School of Etiquette.

"A sorority girl in a sorority house," is what McLeish, who trains celebrity and business clients in appropriate behavior, thought of when she saw the now-widely shared photo.

"What message are you sending?" she asked rhetorically, noting that Conway's knees were apart on the couch -- an etiquette no-no -- "six to eight inches wide."

"That's not a good message," said McLeish, who added that she was "offended personally" by the fact that Conway conducted herself as she did in the presence of HBCU top brass. McLeish, her siblings and her parents all graduated from historically black colleges and universities.

McLeish is in the business of proper behavior. However, as for people in other businesses who saw the photo, their reactions varied.

Sarah Volkman said that she was less interested in talking about the picture than in more substantive aspects of it. "Let's talk about... why those people were in that room," she told PIX11 News, "even though they may not agree" with President Trump's policies, but still "they're having this photo," she said.

Moina John said that she was annoyed by what she saw. "Of all places to put your feet up, you couldn't wait until there?"

Other people PIX11 News encountered in a random survey were downright offended, particularly by what they perceived to be the social dynamics the image captured.

"I think its super disrespectful," said Colleen Cassingham. "She wouldn't be doing it if they were all white executives."

In contrast to those reactions, the social media also has no shortage of people who pointed out that when he was in the Oval Office, former President Barack Obama was fond of putting his feet on the furniture with his shoes on, particularly on his historic 130 year-old desk.

Michelle Obama has also been photographed with in a pose on a White House settee with one foot slightly on the cushion on which she was sitting.

Thomas Halper, a political science professor at Baruch College, said that the issue was less about the image in the photograph than what it was trying to do.

"The way I see it," he said in an interview, "is that black college presidents... were being used as props. It had nothing to do [with them] at all."

President Trump ended up signing an order expressing support for HBCUs. Betsy DeVos, his education secretary, praised them for being "leaders in school choice."

In the opinion of Prof. Halper, however, the measures are wrongheaded. "What does it say when [the administration doesn't] realize that historically black colleges were created because blacks in America had no other choice?"