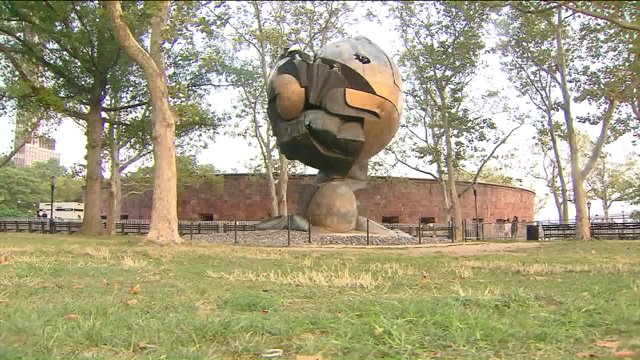 BERLIN — Fritz Koenig, a German sculptor whose work “The Sphere” became a symbol of resilience after the 9/11 attacks in New York, has died. He was 92.

Koenig, who was already a well-known artist thanks to his distinctive large statues and sculptures, created the ball-shaped bronze over a four-year period starting in 1967.

Originally called “Grosse Kugelkaryatide N.Y.,” the 25-feet (7.6 meters) high sculpture stood between the World Trade Center’s towers from 1971 until their collapse in the terror attack on Sept. 11, 2001.

It was recovered from the rubble — heavily dented battered but structurally intact — and was moved to Battery Park. The Port Authority of New York and New Jersey voted in July to return the sphere to its original location after more than 14 years in Battery Park.

The dpa news agency reported Thursday that Koenig died late Wednesday at his home near Landshut, Germany. His death was confirmed by Bavaria state’s Ministry of Culture.