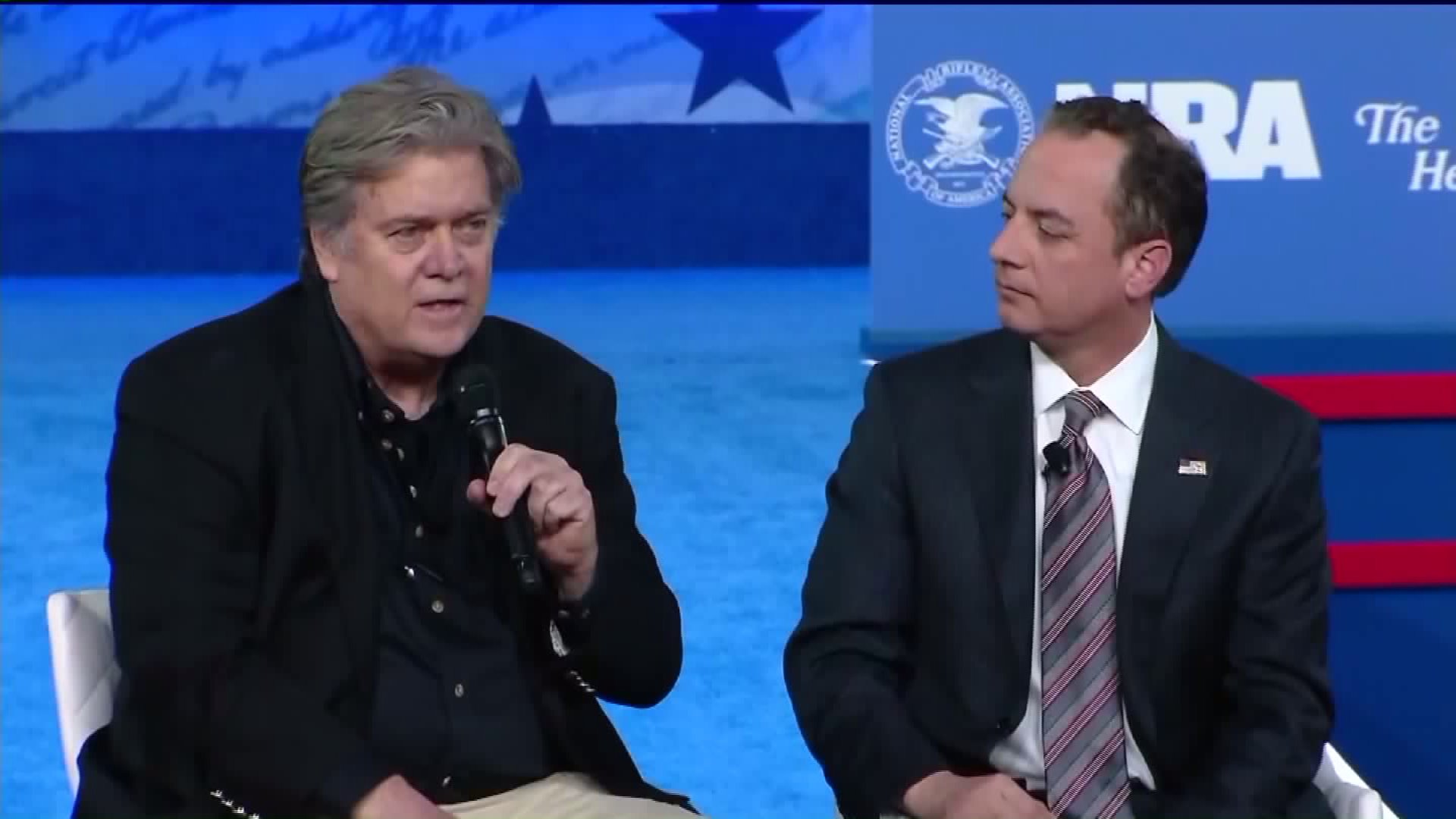 "I think one of the most pivotal moments in modern American history was his immediate withdrawal from TPP. It got us out of a trade deal and let our sovereignty come back to ourselves," he said, referring to the massive Trans-Pacific Partnership trade agreement.

That decision, which he called just a first step in re-imagining US trade policies, was just one of three Bannon pointed to as the most important steps Trump has taken since becoming president just over a month ago.

On the national security front, Bannon highlighted Trump's executive orders on building a border wall and beefed up immigration enforcement policies. And thirdly, he stressed the importance of Trump's moves to begin a "deconstruction of the administrative state" by appointing individuals from the private sector to key economic Cabinet positions who will help strip down federal regulations.

Bannon joined White House Chief of Staff Reince Priebus onstage at CPAC, which Bannon credited with helping launch Trump's political career. The two men discussed Trump's electoral victory, the administration's agenda and railed against the media together as they worked to dispel notions that they are rivals competing for power and influence within the West Wing.

"Well, in regard to us two, I think the biggest misconception is everything that you're reading," Priebus said.

The two sang each other's praises as they insisted their working relationship could not be closer. ("We share an office suite together. We're basically together from 6:30 in the morning until about 11 o'clock at night," Priebus said.)

While Priebus called Bannon "incredibly loyal" and "extremely consistent," Bannon said he admired Priebus' "determination" and noted that he is "always kind of steady."

The forum also provided a rare public view of Bannon's thinking, one filled with dark portrayals of the news media, visions of a "new political order" and grand plans to reimagine the US's posture abroad.

"That is why I am proudest of Donald Trump. All the opportunities he had to waver off this, all the people who have come to him and said, 'Oh you've got to moderate.' Every day in the Oval Office, he tells Reince and I: 'I committed to this with the American people, I promised this when I ran and I am going to deliver on this,' " Bannon recounted.

And while Priebus and Bannon worked to show a united front on Thursday, Bannon acknowledged that they don't always agree, which he called a main reason they are "good partners."

The joint appearance was the latest attempt by the two men to shoot down reports of division, instead claiming in a series of recent interviews that they enjoy a chummy, symbiotic relationship.

"We are executing on President Trump's agenda in record time. That's because Reince is getting the job done," Bannon said.

"We are a completely united team dedicated to enacting his bold agenda to bring back jobs and keep this country safe," Priebus echoed in the interview.

And in an interview with New York magazine, the two men joked about giving each other back rubs and said they speak all day long "until somebody falls asleep."

White House sources have also backed up their account in recent weeks, but a source who spoke separately with both men last week told CNN that while Bannon had nothing negative to say about Priebus, the White House chief of staff badmouthed Bannon over the phone.

The two men's professional backgrounds could not be more different. While Priebus has long been a creature of establishment Republican politics -- rising to Republican National Committee chairman before becoming chief of staff -- Bannon spent most of his professional career amassing wealth in the private sector before taking on a role as the head of the bomb-throwing, establishment-bashing Breitbart News site.

After Trump was elected, their new positions atop the West Wing roster were jointly announced atop.

The two men would work together as "equal partners," Trump said in the release.