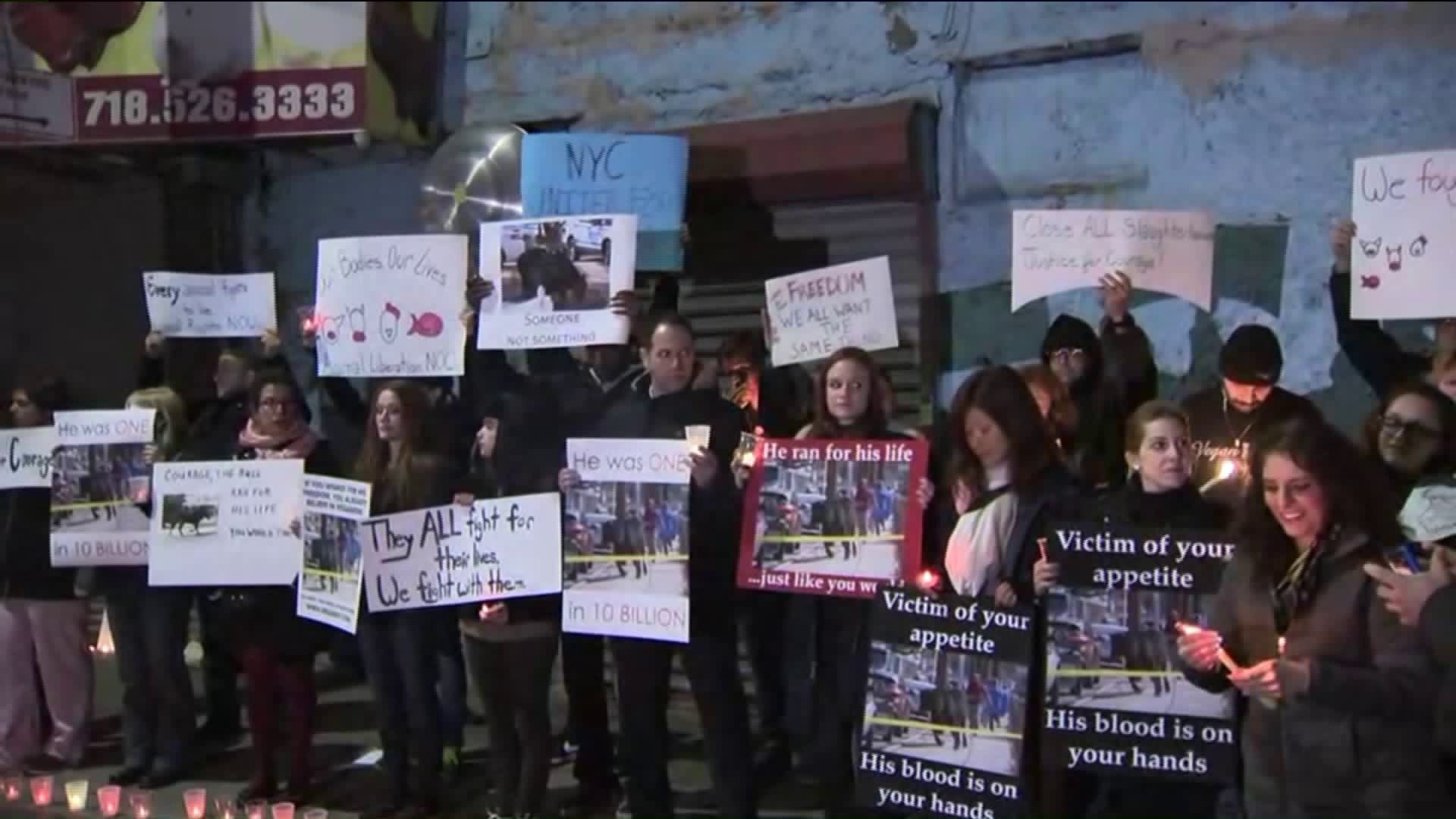 Bull supporters came together in Jamaica.

JAMAICA, QUEENS – A candlelight vigil was held tonight to memorialize the death of a runaway bull.

Dozens gathered for the vigil, which was held outside the slaughterhouse from where the bull escaped Tuesday.

The vigil was organized by the Vegans of New York (VoNY) organization.

Animal advocates urged the city to better train officials to handle situations like these, or to cease slaughterhouse operations within city limits.

“The city needs to take responsibility to properly train law enforcement, of course these animals are going to try to escape,” said Jill Carnegie, head of VoNY.

The bull met a sad end. After being captured alive, it died while on its way to an animal care center in Brooklyn.

“They saw him running for his life like you would or I would if we were faced with pain or fear or imminent death,” said Carnegie.

It was quite the scene yesterday, the bull barreling down the streets, on the run for almost two hours, after escaping from Aziz Slaughterhouse on Beaver Road.   The bull was shot with multiple tranquilizer darts, before finally being captured by the NYPD.

“It was just a bull, it wasn't going to threaten anyone, it was grotesque handled,” said animal activist Elizabeth Argibay.

The community has given the bull a name – Courage. “He certainly was a courageous bull and I hope he inspires the city to improve training,” said Carnegie.

Escaped animals in New York City are not uncommon. “Freddie” the cow broke free from another slaughterhouse – Archer Halal Live Poultry – also in Jamaica, in January of 2016. He was captured and now lives comfortably at Skylands Animal Sanctuary in New Jersey – the same sanctuary that wanted to take in the bull from yesterday’s incident.

In April, 2016, Frank Lee the bull's also ran from Archer Halal. His daring escape led to it being saved by comedian Jon Stewart and his wife, who are animal advocates. The Stewarts brought Frank to a farm.

Those at the vigil tonight lament Courage’s lost opportunity to live out the rest of his life on a farm.

“A rescuer was on its way to help him and bring him to safety so he can live free clearly he was fighting for that opportunity,” said Argibay.

After it’s death, the bull was taken to a crematorium on Long Island.