‘Not My President’ rally brings out thousands, but will the frequency and intensity of protests continue? 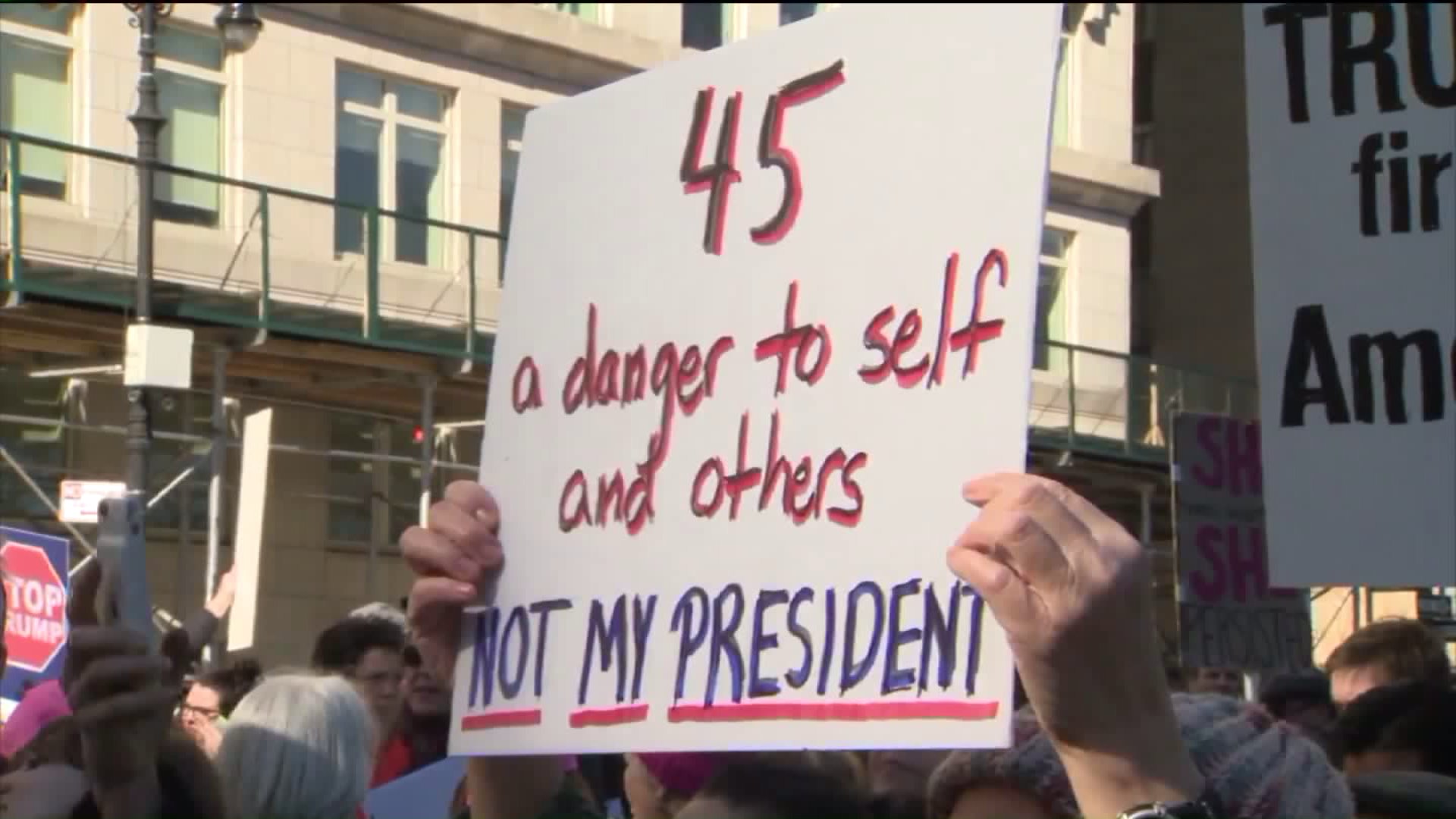 The protests continue a month into Trump`s presidency.

NEW YORK — This Presidents Day, a protest called the Not My President Rally took place in cities nationwide.

In New York, it resulted in thousands of demonstrators coming together on Central Park West and at Columbus Circle near Trump International Hotel and Tower.

It was the second protest of its kind and size in the city in as many days, and was one of dozens of demonstrations in and around New York in the four weeks since Donald Trump was sworn in as president.

While Monday's rally was well attended and boisterous, the frequency of protests begs the question of how long the momentum for such events will last.

Also, the logistics of such events, at least in the case of the Not My President rally, results in large groups of participants being separated from one another, which in turn can have an effect on the rally's cohesiveness and intensity.

Still, demonstrators like Irene Ippolito said that the demonstration did a good job of bringing people together to express outrage over many of President Trump's executive orders and statements over the last four weeks.

Still, however, there's been a certain similarity among the demonstrations critical of Trump in the last couple of months, including in the makeup of the people in attendance.

"I was at the Women's March [on Washington]," said protester Karen Mann at Monday's rally. "I was at the Equality Rally at the Stonewall Inn, I was at the Be A Light protest at Times Square."

As the protests add up in number, demonstrators on Central Park West Monday did not get the impression that their impact is lessening.

"It doesn't seem like it's losing momentum," said Lois Yeager, who'd come in from Central Connecticut with her daughter to raise their voices in protest. "I hope it forces elected officials to take action," she told PIX11 News.

"As long as [President Trump] keeps doing things that are unconstitutional," said another protester, "we'll be out here."

The Trump White House has indicated that by the end of next week, it's likely to issue a new, revised executive order restricting travel to the U.S. from seven predominantly Muslim countries, after the president's first order was overturned in a variety of courts of law.

The new order is expected to result in even more protests in New York and nationwide.

Meanwhile, the Not My President Rally had to comply with city ordinances and NYPD restrictions that every large demonstration deals with. In the case of Monday's rally, however, it resulted in a somewhat disjointed event.

NYPD security guidelines require that every block along Central Park West, where the rally was held, be enclosed in metal police barriers, and that demonstrators remain inside those barriers.

Some other demonstrations that have taken place on CPW dealt with the rules by setting up a high stage, visible for many blocks, above protesters' heads, as well as large video screens and audio speakers in each block in which demonstrators have gathered.

The result has been that all the protesters in each block can see and hear the same programmed event.

That was not the case for the Not My President rally, which had no stage set up. It had only a few speakers and microphones in one of the blocks where protesters had gathered. For five to six more city blocks, people led their own chants, and displayed signs. It almost felt like four separate demonstrations, spread out, block by block from 59th Street/Columbus Circle at its southern end to 66th Street in the north.

"Even though we're protesting," said one demonstrator, "it's kind of toned down because of that, the separation."

The organizer of the event, Beth Cavagnolo, explained why it had to be set up that way. "It's all safety requirements, actually," she told PIX11 News. "We have to have it in sections," she said, in case people need to be moved out of the area quickly in an emergency. "I had to have an ambulance on scene," Cavagnolo said, as she pointed to an FDNY EMS ambulance at the ready on 63rd Street, just in case.

She also said that she does not see the protest that she organized as being the last one of its scope and size in New York City any time soon, no matter what President Trump declares in his expected new executive order next week.

"The next major protest is the Day Without A Woman protest on March 8th," a work strike, said Cavagnolo. She also said that she expects large protests on Flag Day on June 14th and on Independence Day, July 4th.

Next to the Not My President Rally at Columbus Circle there was also a pro-Trump demonstration, in which six to 10 people displayed Make America Great Again caps and held signs and flags. One of the demonstrators, Batya Goldberg, who identified herself as a Jewish woman who supports the president, was catcalled as she tried to express her support for Trump.

"Heil Hitler!" a passerby yelled at her, apparently comparing President Trump to one of the most infamous war criminals in world history. Goldberg did not respond to the insult, but instead addressed it in her comments to PIX11 News.

"I think it's very wrong what's going on here," she said. "We should all be able to express our opinions."