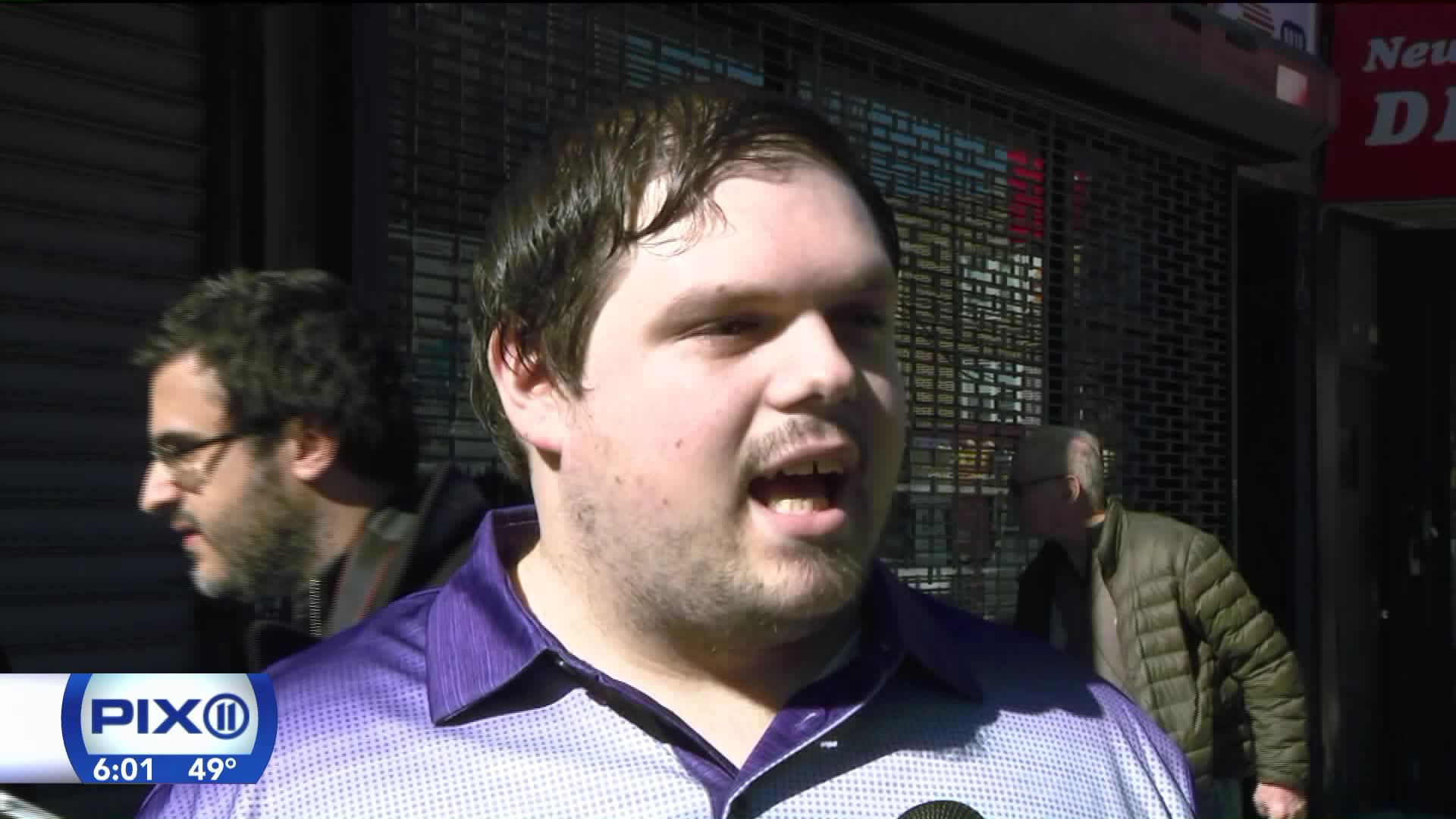 A rally was held Monday in support of a former aide to Council Member Vincent Gentile.

BAY RIDGE, Brooklyn — A rally was held Monday in support of a former aide to Council Member Vincent Gentile.

In December, Michael Bistreich filed a $10 million lawsuit against the city, accusing Gentile and his staff of bullying and tormenting him because he has Asperger's Syndrome.

Bistreich accuses Gentile of allowing an environment where staffers allegedly locked Bistreich in the basement, threw pencils at him and mutilated a stuffed animal on his desk.

Several dozen people, many of them strangers to Bistreich, showed up today to voice their solidarity outside Gentile's office on 5th Avenue in Bay Ridge.

"It makes me feel fantastic it tells me that disabled workers anywhere have a chance because people will stand up for them, the communities will stand up for them no matter who the perpetrator is, this type of behavior should not be tolerated. I want to personally thank from the bottom of my heart everybody who came here today to show they would support such a cause it means everything," said Bistreich.

Raymond Ranaletta organized the event. He posted it on social media and interest grew.

Ranaletta says he suffers from two disabilities and understands what Bistreich is going through.

"I want people to know that people who fight disabilities. people like myself, people like Mike, we are more than capable of doing many great things and we have a lot to offer to the community," said Ranaletta.

Bistreich says most disturbing was what allegedly happened to his teddy bear. The bear was a source of comfort. Since he came forward with his story - the offers to donate new stuffed animals came pouring in.

"The original amount just from looking online and people contacting me is that it had gone up to at least 15 to 20,000 and i got contacted by people as far away as Belgium and Scotland saying they were donating stuffed animals," said Bistreich.

Today supporters - many of them who live in this district - dropped off more teddy bears and brought homemade signs. One read "Abuse in the workplace will not stand." Another read "Shame on Councilman Gentile, we stand with Mike."

"I live in the neighborhood, I live in Brooklyn and Gentile is a councilman he's supposed to be supporting all New Yorkers within the district and I think the allegations against him are very serious," said Diane Atkins, who came to show her support for Bistreich.

"I'm shocked that someone that represents a diverse neighborhood like Bay Ridge would stand there as the Councilman and treat someone like that it's really unconscionable," added Atkins.

Bistreich says he worked for Gentile for 2 years as a legislative aide. It was his dream job. He left over a year and a half ago. Bistreich alleges Gentile told him he was bothered by his symptoms and asked him how there could not be anything to fix his condition. Today was the very first time Bistreich was back at the office since he left.

"The idea of being around here, looking in there reminds me of the landscape of the office, that's it's the place where all of that was done to me. It's the place where so much disrespect is the general perception I have of this particular building I don't like being here but with support, I can do it," said Bistreich.

The city recently responded to the lawsuit.

"They came back saying I should just dismiss what happened to me as 'petty slights' and 'trivial inconveniences.' I find this an arrogant and disrespectful response. Basically telling me how to feel about how I was treated when I was treated that way purposely to harm me," charges Bistreich.

From a Law Department spokesman -- “The language used in the city’s answer is drawn from court cases that establish the legal standard for asserting a defense under the city Human Rights Law and was not in any way intended to diminish the seriousness of the allegations."

Bistreich says he's prepared to go through with the suit, even if it is a long drawn out process.

"We can't just let it go when its wrong. We just fight it till justice comes out of the situation, what is fair is most important," said Bistreich.

As for the teddy bears collected today, they will be donated to the Salvation Army.