New Yorkers rally to say, ‘Today I am a Muslim, too’ 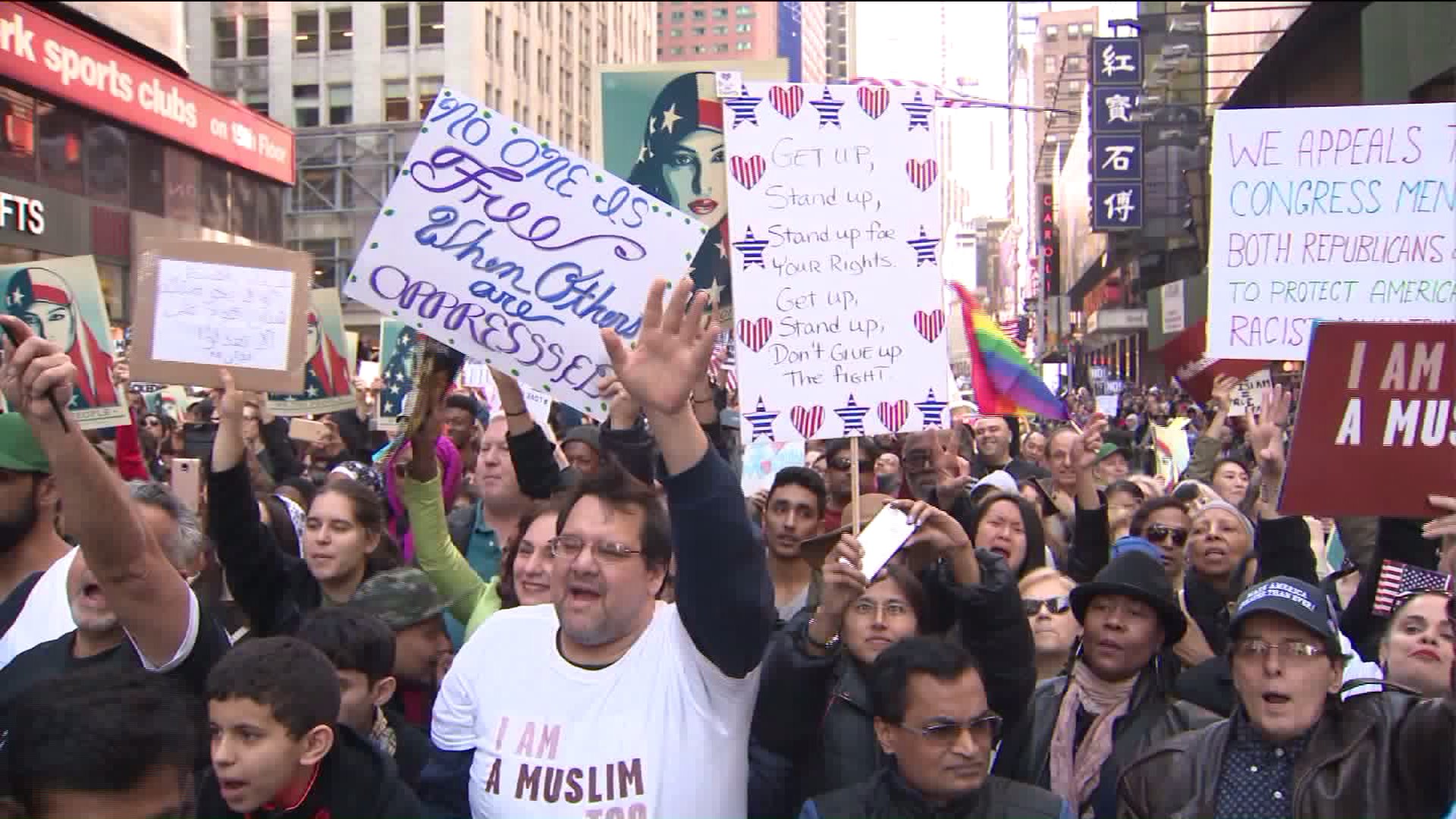 NEW YORK — New Yorkers by the thousand, representing myriad backgrounds and faiths, converged on Times Square on Sunday, heeding a music mogul's calls to let Muslims know their fellow Americans stood by them.

The demonstrators -- many of them hoisting placards featuring a woman in an American flag hijab with the caption "we the people are greater than fear" -- gathered at one of the world's most famous public places to denounce what they see as threats and pressure aimed at Muslim communities.

The rally, dubbed "Today I am a Muslim Too," was billed on social media as "a day of solidarity with our Muslim brothers and sisters in reaction to the vicious attacks by (President Donald Trump)."

Trump has made numerous disparaging remarks about Muslims and an appeals court recently put a halt to his executive order that temporarily barred all refugees and travelers from seven predominantly Muslim countries from entering the country. Trump has vowed to issue a new order tailored to the court's decision.

Demonstrators toted American flags and maroon signs that said, "I am a Muslim, too," as one activist donned a Trump costume and paraded through the crowd with a bald eagle in a cage.

The list of speakers was extensive, according to the program. In addition to entrepreneur and Def Jam Recordings co-founder Russell Simmons, who helped organize the event, attendees were scheduled to hear from rabbis, imams, a Sikh, a Buddhist, Episcopalian and Presbyterian reverends, a Mennonite, a Seventh Day Adventist minister, a Hindu, a Baptist pastor, local politicians and civil rights advocates.

Simmons, no stranger to activism, told those at the rally to focus on how Trump, his onetime friend, had unified the people in attendance.

"We won't speak too harshly of him today. We want to thank him for bringing us together," he said.

He decried those who would demonize Muslims as terrorists when, in fact, Muslims have been the victims of terrorism and stand as allies in the fight against extremism.

"So we are here today to show middle America our beautiful signs and, through our beautiful actions and intention, that they have been misled -- that the seeds of hate that were small and maybe just ignorance cannot be watered, and that hate cannot grow because we are here to assist them in promoting love," Simmons told the crowd.

Brooklyn-born Palestinian-American activist and commentator Linda Sarsour noted that Sunday marked the 75th anniversary of President Franklin Roosevelt's Executive Order 9066, which paved the way for the internment of Japanese-, German- and Italian-Americans.

She asked those in attendance to commit to being part of "the true never-again generation."

"I am unapologetically Muslim, all day, every day," she told the cheering crowd. "I am not afraid because fear is a choice; it is not a fact. So today I ask you, in the true grit and spirit of a New Yorker, that you choose courage in the face of fear."

This isn't the first time Simmons has urged New Yorkers to identify as Muslims as a form of protest. Rabbi Marc Schneier and Imam Shamsi Ali, who helped organize Sunday's event, joined Simmons before a much smaller Times Square crowd in 2011 to protest congressional hearings on Islamic terrorism.

Simmons also took part in Occupy Wall Street protests and has been an outspoken supporter of marriage equality, animal rights and overturning what he's criticized as harsh drug laws.

In December 2015, Simmons wrote his "old friend" Trump, urging him to "stop the bullsh**" in regard to the soon-to-be US President's call to ban Muslims from entering the United States.

"Don't feed into the rhetoric created by small-minded people. You're smarter and certainly more loving than you let on," Simmons wrote. "I know the cheap seats are easy to play to, but you can get them just by being the man I have known for nearly 30 years."