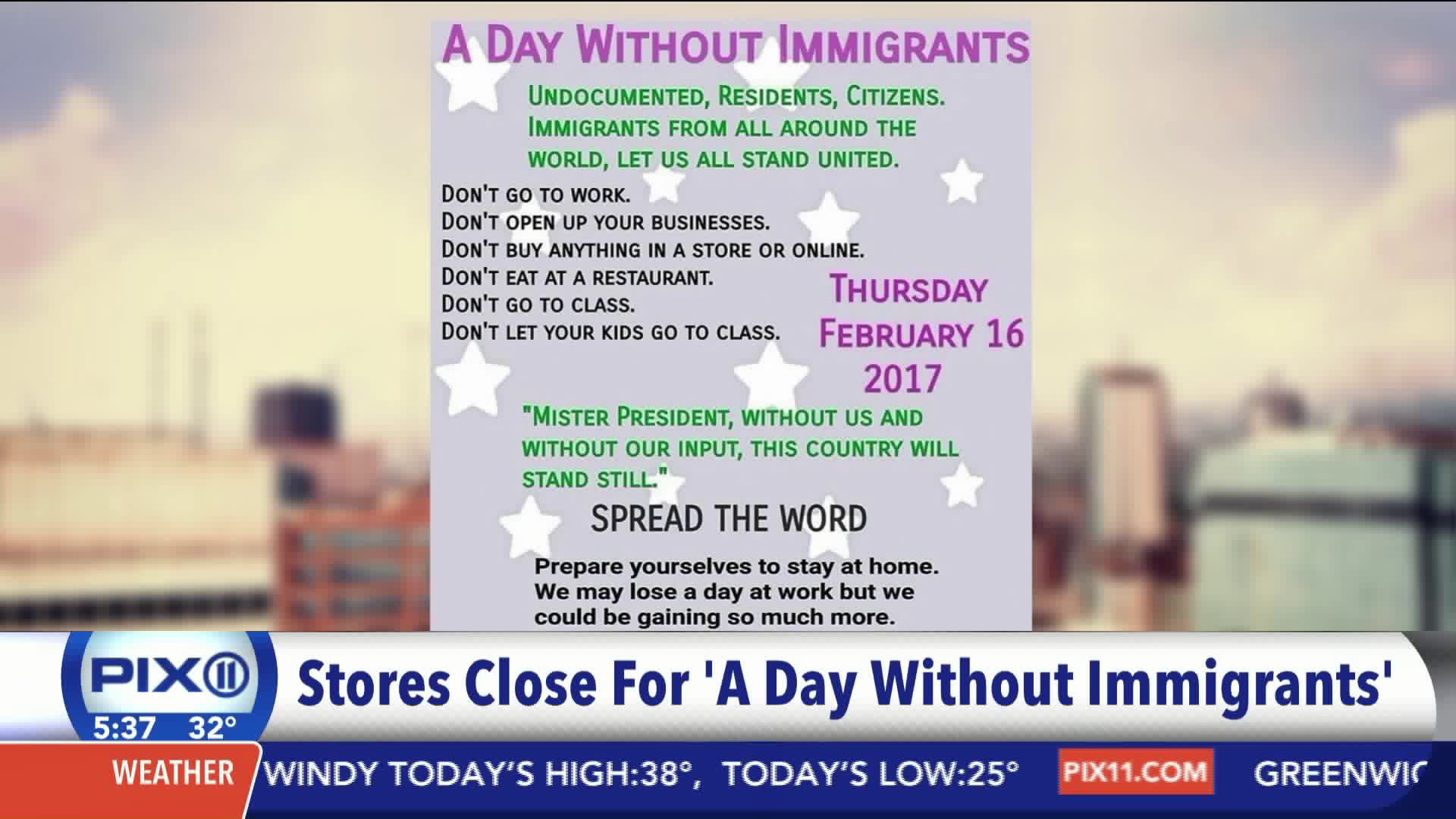 Immigrant workers across the country are planning to strike Thursday to demonstrate their importance to American society.

NEW YORK — Immigrant workers across the country are planning to strike Thursday to demonstrate their importance to American society.

The protest was set in motion as the Trump administration continues to pursue hard-line enforcement policies that advocates fear will disrupt communities and the economy.

While the majority of the strike is expected to take place in Washington, D.C., protests in major U.S. cities across the nation are also being carried out Thursday.

Blue Ribbon restaurants in NYC, including Blue Ribbon Brasserie, Brooklyn, Sushi, Sushi Bar & Grill, Sushi Izakaya, Hi-Bar, and Downing Street Bar, will be closed Thursday in support of their employees, according to their website.

At least three protests are expected to be carried out in New Jersey, according to New Jersey immigrants' rights group, New Labor.

New Labor organizers will demonstrate in Lakewood at 9 a.m., followed by another in New Brunswick at 1 p.m. and third in Newark at 3 p.m.

In Perth Amboy, officials have urged residents to plan for several local restaurants and bodegas to be closed as part of the protest. City cab companies are also expected to be out of service and officials say residents should plan accordingly.

In Danbury, Conn., more than 50 Hispanic-owned businesses are expected to be closed Thursday for the strike.

Organizers in Philadelphia told the Associated Press they expect hundreds of workers and families to participate.

On Wednesday, the hashtag #ADayWithoutImmigrants began to trend on Twitter. Some announced their plan to stand in solidarity with immigrants. Others said this was a chance to round up and deport illegal immigrants.

What will we do without all the doctors, lawyers and engineers? #DayWithoutImmigrants

Who will be the First Lady????

#DayWithoutImmigrants awesome the illegals will be easy to round up & deport. #BuildTheWall #BlastTheTunnels #DeportExpiredVisas #MAGA

I look forward to a lifetime without immigrants. @ICEgov needs to ramp up the deportations. #BuildTheWall #DayWithoutImmigrants

The majority of the strike is expected to take place in Washington, D.C.

Restaurants in the D.C. area were planning to operate with short staff, offer menus in solidarity with striking immigrants and in some cases, close altogether.

Celebrity chef José Andrés, who is locked in a lawsuit with President Donald Trump for pulling his restaurant from the Trump hotel project in Washington over Trump's anti-undocumented immigrant rhetoric, announced he would close most of his restaurants Thursday as part of the protest.

The Trump International Hotel did not respond to a request for comment on its plans for Thursday.

Similar actions have taken place in other cities. Milwaukee, Wisconsin, was the site of a similar protest this week, and bodegas in New York closed earlier this month in protest of Trump's travel ban executive order.

Thursday's planned protest is the first such event in the nation's capital, but so far it has failed to catch the eye of the lawmakers who create the policies that the protests will target.

Outreach to many of the offices on Capitol Hill that are the most involved in immigration policy turned up little awareness of the planned protest, aside from a few word-of-mouth exchanges.

The office of the Architect of the Capitol, which oversees and contracts with thousands of Capitol support staff, did not respond to an inquiry about whether any preparations were underway or absences were anticipated.