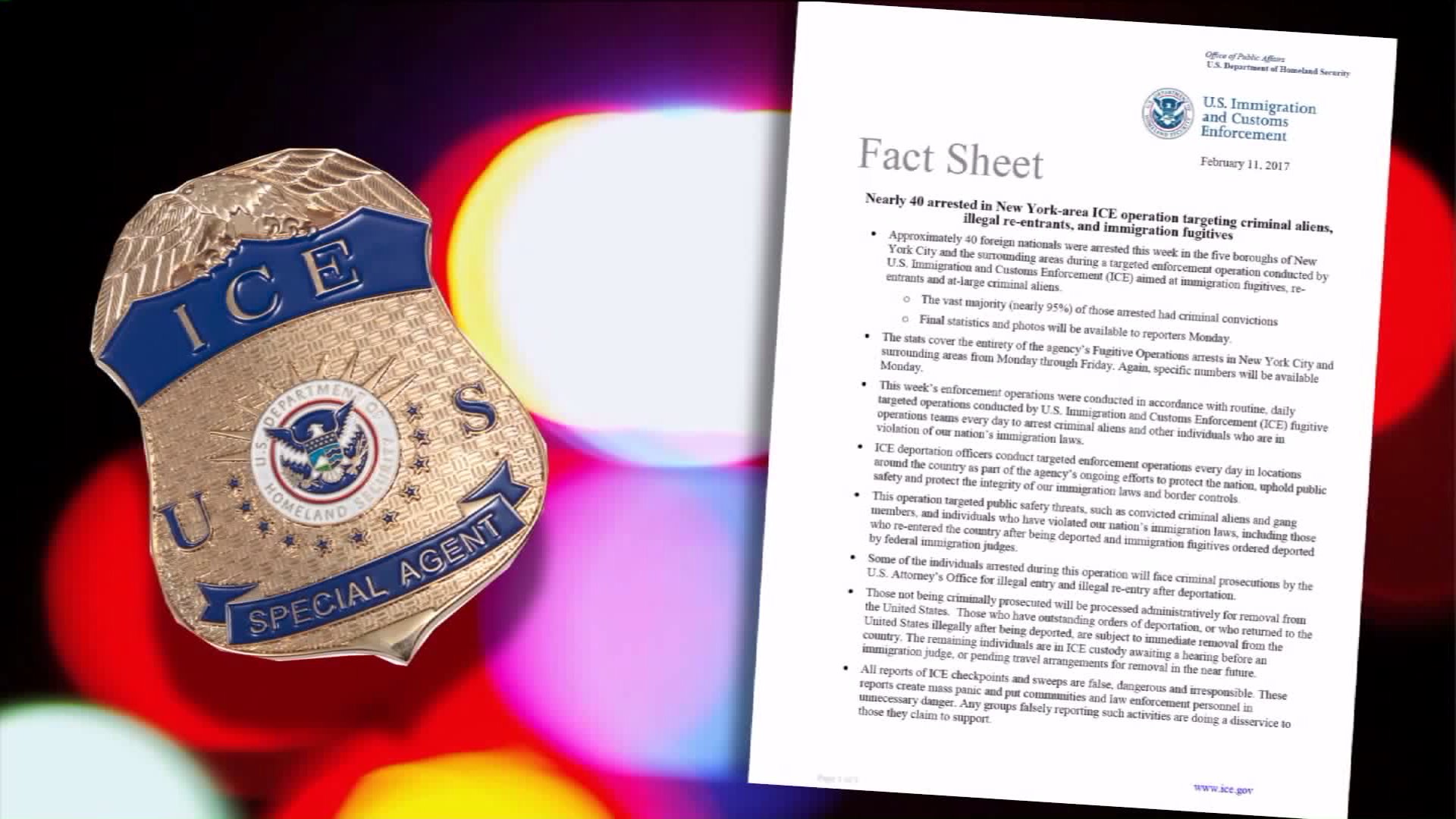 An ICE spokesperson confirmed the arrest and siad would release further information Monday.

The ICE New York press secretary confirmed Sunday the details of the memo to PIX11 and said further information would be released Monday.

The memo, dated Saturday, Feb. 11, claims that "the vast majority (nearly 95%) of those arrested had criminal convictions."

ICE operations were conducted across the U.S. Monday through Friday. "Targeted" operations were carried out in order to "arrest criminal aliens and other individuals who are in violation of our nation's immigration laws."

Individuals with criminal convictions who were arrested during the ICE raids referenced in the memo will face prosecution, according to the memo. Those who are not criminally prosecuted will be processed for removal from the U.S., and individuals who have outstanding orders of deportation or who returned illegally after being deported are subject to immediate removal from the U.S., the memo says.

Remaining individuals who have been arrested are awaiting a hearing before an immigration judge, or pending travel arrangements for the near future, the memo says.

The New York Immigration Coalition released a statement Sunday condemning the reported ICE operations in NYC as claimed by the memo:

"We are horrified and angered by the ICE raids and activity in the greater New York area that has led to the arrest and detainment of 40 people. Shame on ICE for putting New York’s immigrant communities - four million strong - in a state of panic. These arrests do nothing but tear families apart, hobble our economies, and corrode the bonds of trust that tie our communities together - all under the false pretense of “public safety.”

“These are dark times for immigrants in our New York, and in America. On behalf of our 175 member agencies across the state, the New York Immigration Coalition demands a complete halt to these irresponsible enforcement operations that are having a chilling effect among New York’s diverse communities.

“The NYIC is committed to ensuring that our communities have the most accurate information possible to best protect themselves. We urge everyone to educate themselves as to their rights when interrogated by ICE and to consult with a lawyer if they have any questions. Those with prior deportation orders or prior criminal histories are particularly vulnerable, and should get educated as soon as possible.

“We will not stand down. Our New York is inclusive, our allies are large in number, and we will respond by using everything in our power to fight back against deportations, walls, and bans. We call on our allies, our elected officials and our partners to stand with us against these raids and arrests targeting our communities.”

Five Staten Island residents from Mexico were arrested during this period of ICE raids. A source told PIX11 the raids began on Feb. 3 and ended Wednesday.

Four of these residents were arrested at their homes while another was arrested at a Staten Island courthouse, according to the source.

Four of the residents have children who are U.S. citizens, according to the source. It's still unclear whether any of the individuals who were taken into custody had criminal records.

New York City is a sanctuary city, a term that generally refers to communities that do not cooperate with federal immigration officials. There are at least 39 other U.S. cities that are sanctuary cities.