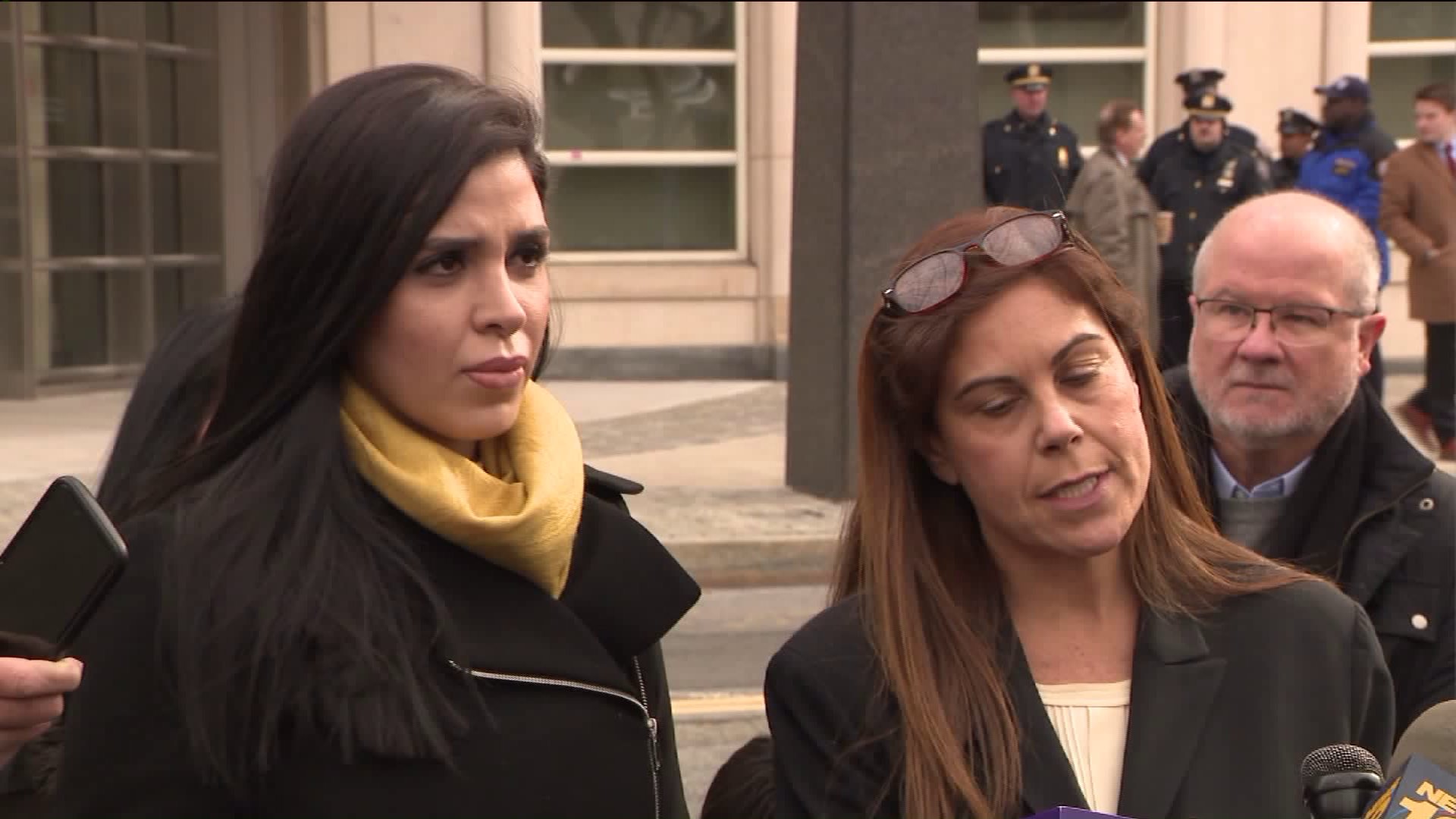 "El Chapo" appeared in person in Brooklyn federal court, but the real headline was his young wife also showing up.

He had a 9:30 a.m. hearing in federal court — and police apparently wanted to get him over the Brooklyn Bridge before rush hour.

The real headline was El Chapo’s young wife showing up in court.

Emma Coronel, 27, the mother of his twin girls, is more than 30 years younger than her husband, who is 59.

She’s a former beauty queen who married El Chapo on her 18th birthday.

Her father and other family members went to prison in Mexico for narcotics offenses, and El Chapo’s wedding to Coronel (his third wife) in 2007 was considered a marriage of powerful, Mexican drug families.

“His wife has traveled here from Mexico,” public defender, Michelle Galernt, told reporters outside court, as Coronel stood silently by her side, wearing a yellow scarf and black jacket.

Regarding her infamous client, Galernt said, “We believe he should be able to meet with his family or at least speak to his family.”

The U.S. Bureau of Prisons is not making things easy for El Chapo.

He’s in lockdown 23 hours a day in the Specialized Housing Unit of the MCC, where the federal government has previously housed high-profile, terror suspects.

So far, he’s only been able to meet with his two public defenders and two paralegals from their office.

“We think it’s ridiculous for the government to expect Mr. Guzman to choose a counsel, when he’s locked up 23 hours a day,” said public defender Michael Schneider.

Michelle Galernt complained they can’t even offer El Chapo a glass of water during meetings that can last more than three hours.

A prominent attorney showed up in court Friday as a possible replacement for Guzman’s public defenders.

He actually worked at least a dozen years as a federal prosecutor.

Now, Fishbein is defending people accused of white collar crimes as a partner in the high-powered firm Debevoise & Plimpton.

The judge noted at one point, “The government thinks he has access to substantial assets. Should he have federal defenders at all?”

El Chapo was extradited suddenly from Mexico January 19 on the last day of the Obama Administration and appeared in Brooklyn Federal Court for his first hearing on the day Donald Trump was sworn in as United States President, the following day.

The public defenders complained they never reviewed the Mexican extradition papers, because there’s a stipulation El Chapo must sign them first.

The judge then ordered the papers be served at the federal correctional center or to the lawyers.

“I don’t care if Mr. Guzman doesn’t accept them, and they have to be dropped on the floor,” Judge Cogan said.

The Public Defenders said Mexico flew El Chapo to the United States and “it was assumed he would be prosecuted in Texas or California.”

PIX11 News broke the story last February that El Chapo would face trial in Brooklyn’s Eastern District, ahead of six, other U.S. jurisdictions that wanted to prosecute him for a continuing criminal enterprise in the
narcotics world.

Mexico was embarrassed twice in the last 15 years by El Chapo’s two escapes from its prison system.

The first time, he escaped in a laundry basket and enjoyed 15 years of freedom, before he was apprehended.

The second time, he got out in 2015 through a one-mile tunnel that was dug for him under the shower stall in his prison cell.

He was caught within six months, after Mexican troops stormed his hide-out with heavy artillery.

El Chapo’s young wife had to settle for a smile in the courtroom, when she attended his hearing Friday.

He was taken back to the Metropolitan Correctional Center in downtown Manhattan with another helicopter hovering over his convoy.

He’s expected back in court in early May.