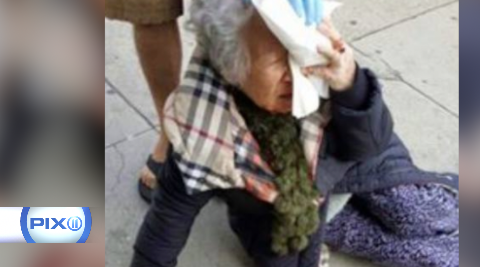 Some witnesses claim that the suspect yelled "white power" before pushing the elderly woman to the ground.

LOS ANGELES — The assault on 83-year-old Korean woman by another woman reportedly yelling "white power" before running off is not being investigated as a hate crime.

Police were called to the corner of Western Avenue and Council streets in Central Los Angeles and witnesses say that the suspect punched the elderly woman in the back of her head causing her to fall to the ground. She suffered a 1-inch cut to her cheek and had pain in her knee.

But according to the Los Angeles police, none of the witnesses of the assault heard the suspect make any racial remarks.

The victim told police she was caught off guard by the attack, the LA Times reported.

The suspect, 27-year-old Alexis Duvall, was booked on suspicion of battery and was being held in lieu of $50,000 dollars bail.

Officials said it was not immediately clear what motivated the attack.

Police say Duvall gave them a false name when she was arrested, but her fingerprints identified her as Duvall, the LA Times reported. She also appeared to under the influence or mentally ill, and yelled obscenities at arresting officers. Duvall told officers she was homeless.

The story and the picture of the injured woman went viral. Facebook user Linda Lee, who said she witnessed the attack, shared the post. In the post, which was made private Thursday afternoon, she showed the victim being treated for injuries. The sidewalk in the photo is visibly splattered with blood.