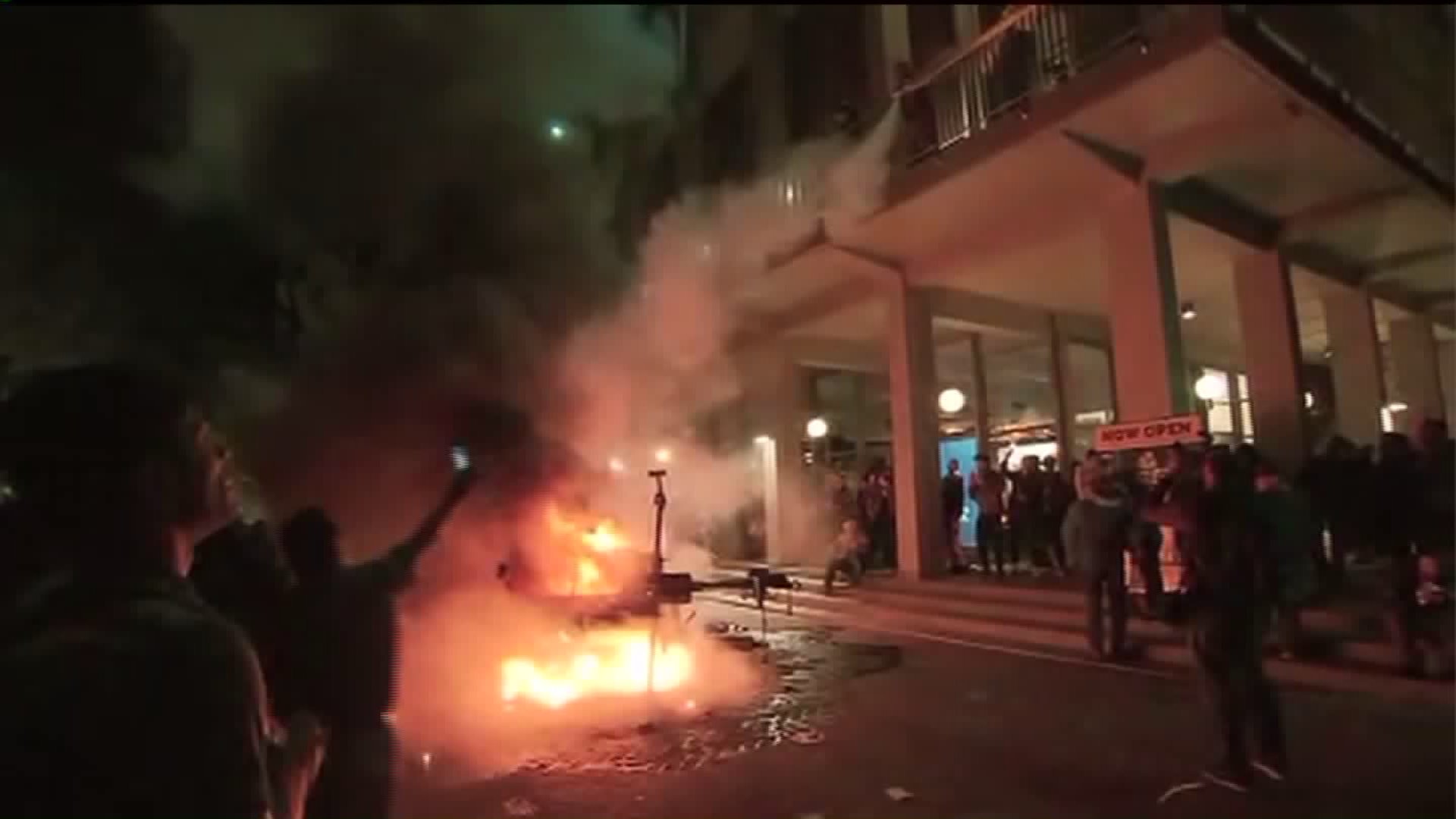 Some of the protesters are pulling away metal barricades as police in riot gear guard the building.

The university blamed “150 masked agitators” for the violence, saying they had come to campus to disturb an otherwise peaceful protest.

Black-clad protesters wearing masks threw commercial grade fireworks and rocks at police. Some even hurled Molotov cocktails that ignited fires. They also smashed windows of the student union center on the Berkeley campus where the Breitbart editor’s event was to be held.

At least six people were injured, and some were attacked by the agitators, the university said. They are a part of an anarchist group known as the “Black Block” that has been causing problems in Oakland for years, said Dan Mogulof, UC Berkeley spokesman.

Administrators decided to cancel the event about two hours before Yiannopoulos’ speech. UC Berkeley said it removed him from campus “amid the violence and destruction of property and out of concern for public safety.”

More than 1,500 protesters had gathered at Sproul Plaza, chanting and holding signs that read: “No safe space for racists” and “This is war.”

The violent protesters tore down metal barriers, set fires near the campus bookstore and damaged a construction site of a new dorm.

As the scene spiraled out of control, the university police warned protesters to disperse and issued a lockdown for campus buildings.

“We condemn in the strongest possible terms the violence and unlawful behavior that was on display and deeply regret that those tactics will now overshadow the efforts to engage in legitimate and lawful protest against the performer’s presence and perspectives,” UC Berkeley said in a statement.

“While Yiannopoulos’ views, tactics and rhetoric are profoundly contrary to our own, we are bound by the Constitution, the law, our values and the campus’s Principles of Community to enable free expression across the full spectrum of opinion and perspective,” it stated.

As police disbursed the crowd from campus, a remaining group of protesters moved into downtown Berkeley and smashed windows at several local banks.

Yiannopoulos had been invited to speak by the Berkeley College Republicans. He has been on a college speaking tour and had planned to speak about cultural appropriation on Wednesday.

In a Facebook Live video, Yiannopoulos described what happened as “an expression of political violence.”

“I’m just stunned that hundreds of people … were so threatened by the idea that a conservative speaker might be persuasive, interesting, funny and might take some people with him, they have to shut it down at all costs.”

UC Berkeley said it had prepared security measures following what had happened at Yiannopoulos’ previous events. One of his planned speaking engagements at UC Davis was also canceled last month in response to protests.

“Ultimately, and unfortunately, however, it was impossible to maintain order given the level of threat, disruption and organized violence,” UC Berkeley said in a statement.

Even those critical of Yiannopoulous said they didn’t condone what happened.

“It’s a sad irony in the fact that the Free Speech Movement was founded here and tonight, someone’s free speech got shut down. It might have been hateful speech, but it’s still his right to speak,” said Shivam Patel, a freshmen who stood outside of the Sproul Plaza.

The Free Speech Movement started at UC Berkeley in 1964 after students protested in mass when administrators tried to restrict their political activities on campus.

Patel said he supported peaceful protests, but disagreed with the way things turned out on Wednesday.

“It allows people on the right to say, ‘Look at all these liberal Berkeley snowflakes. They’re intolerant of speech.’ I don’t think it’s productive at all. It does nothing to help this country.”