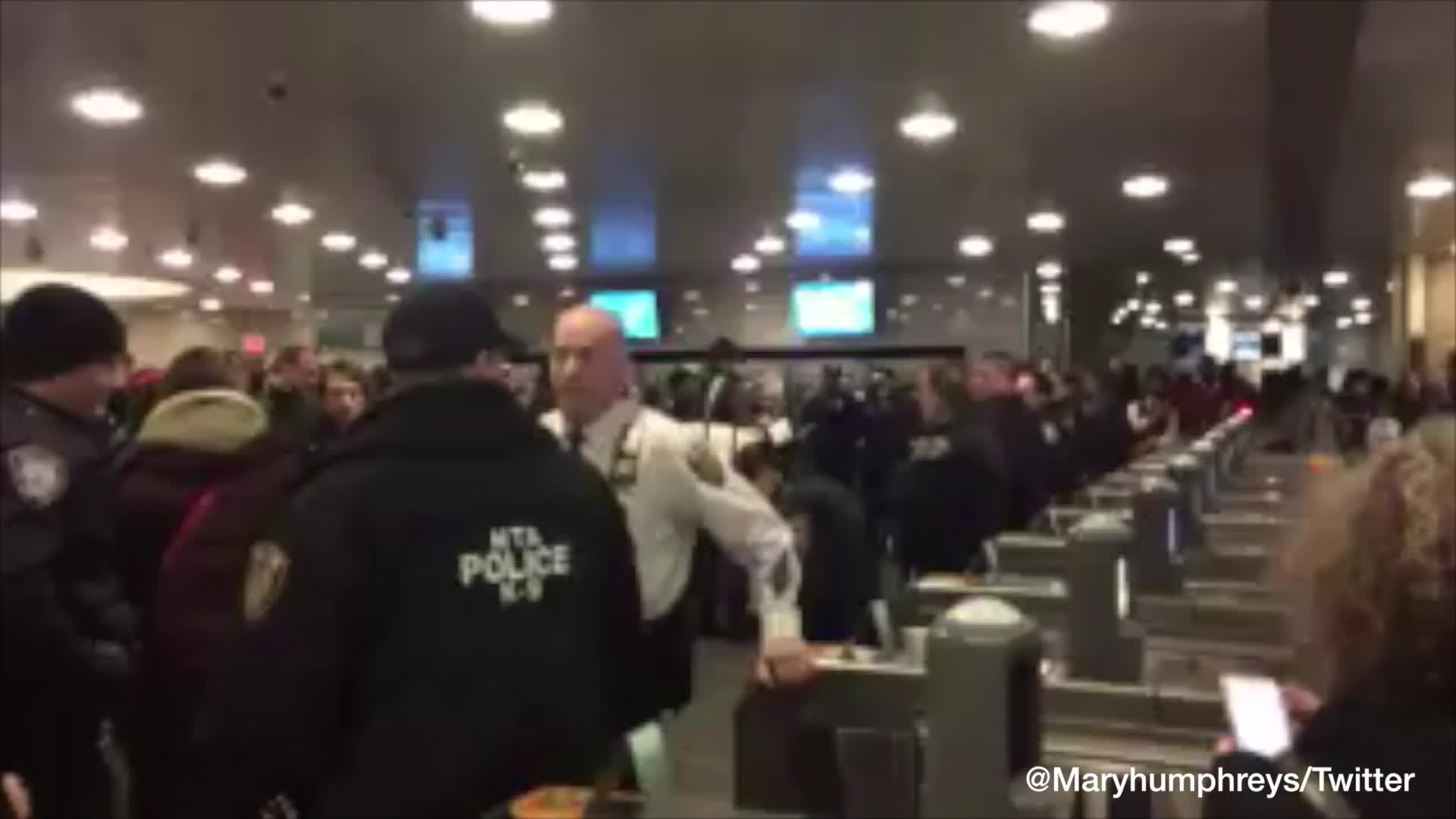 Protesters yelled "shame on you" as NYPD officers blocked the entrance to JFK's AirTrain. 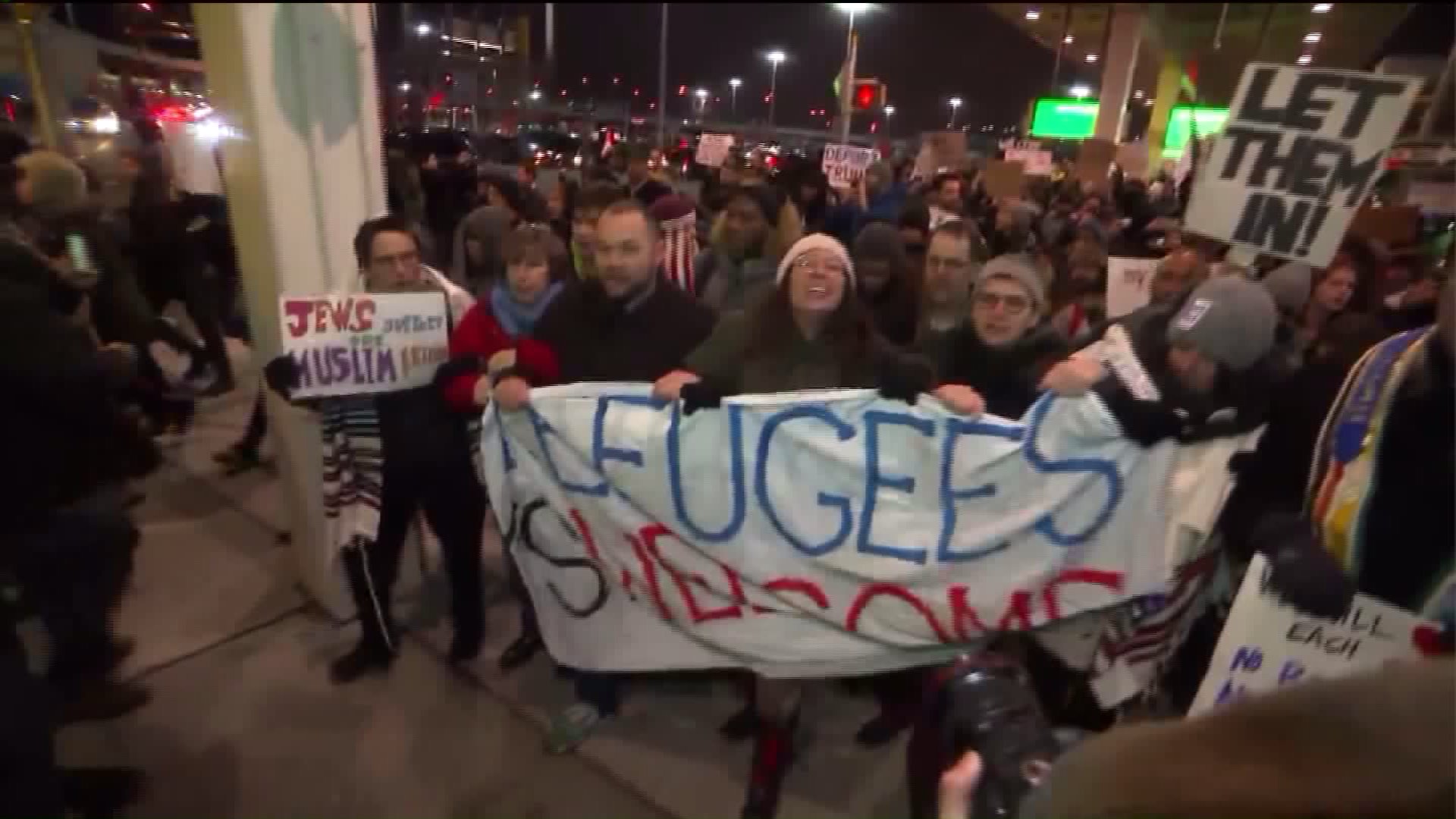 The protests were instigated by the detentions Friday night of two Iraqi refugees, both of whom had been released as of Saturday evening.

Amid outrage over the unprecedented detentions, protests began earlier in the day and kept Saturday evening, powered through social media.

As crowds grew, the Port Authority suspended the AirTrain, which served as a key conduit for protesters coming from Jamaica Terminal and the Howard Beach subway station. Gov. Andrew Cuomo, who partially controls the authority, reversed the decision about an hour later, citing the right to peaceful protest. "The people of New York will have their voices heard."

Warning: This video contains graphic language that may be disturbing to some.

The emergency protest began outside of the international arrivals area of Terminal 4 about 11 a.m. Protesters held up signs that read, "Legal Visas = Let Them In," "Let my friends in," "No ban, no wall," and "Refugees are welcomed here" as they chanted "No hate, no fear. Immigrants are welcomed here!"

Organizations including the AFT Union and New York Taxi Workers Alliance publicly announced their support for the protest.

"Our 19,000-member-strong union stands firmly opposed to Donald Trump's Muslim ban. As an organization whose membership is largely Muslim, a workforce that's almost universally immigrant, and a working-class movement that is rooted in the defense of the oppressed, we say no to this inhumane and unconstitutional ban," the NYTWA said in a statement.

"We stand in solidarity with all protesting at JFK #Terminal4 & airports across the country. We are a country of immigrants, we stand together," AFT union wrote on Twitter.

"We cannot be silent. We go to work to welcome people to a land that once welcomed us, we will not be divided," a tweet from the NYTWA read Saturday evening.

No cabs in this line at JFK terminal 4. #NoBanNoWall #RefugeesWelcome pic.twitter.com/ZX5BycRTie

From 6 to 7 p.m., cab drivers did not pick up passengers at Terminal 4.

"As an organization whose membership is largely Muslim, a workforce that's almost universally immigrant, and a working-class movement that is rooted in the defense of the oppressed, we say no to this inhumane and unconstitutional ban," the NYTWA said in a statement. There are approximately 19,000 drivers in the union including yellow cab drivers, green car and black car drivers. The union also represents Uber and Lyft drivers.

Earlier, lawyers representing two Iraqi refugees who were detained at the airport filed a motion to have them released. The refugees, who both have U.S. visas, were detained late Friday night when Trump's executive order went into effect.

One of the refugees was released Saturday afternoon. Eleven refugees are still being held at JFK airport, Rep. Jerry Nadler said.

Gov. Andrew Cuomo released a statement on the refugee detainment, saying, "We are a nation of bridges, not walls."

"I never thought I'd see the day when refugees who have fled war-torn countries in search of a better life, would be turned away at our doorstep. We are a nation of bridges, not walls, and a great many of us still believe the words 'give me your tired, your poor, your huddled masses...' This is not who we are and not who we should be."

Trump signed the executive order Friday afternoon that banned refugees from entering the U.S. for 120 days and ones coming from war-torn Syria indefinitely. Citizens from seven Muslim-majority countries — Iran, Iraq, Libya, Somalia, Sudan, Syria and Yemen — are refused entry to the U.S. for 90 days.

Though the ban is temporarily, Trump can extend it after it expires.

Immediately after the executive order went into effect, immigrants who were in flight to the U.S. were detained at airports nationwide.