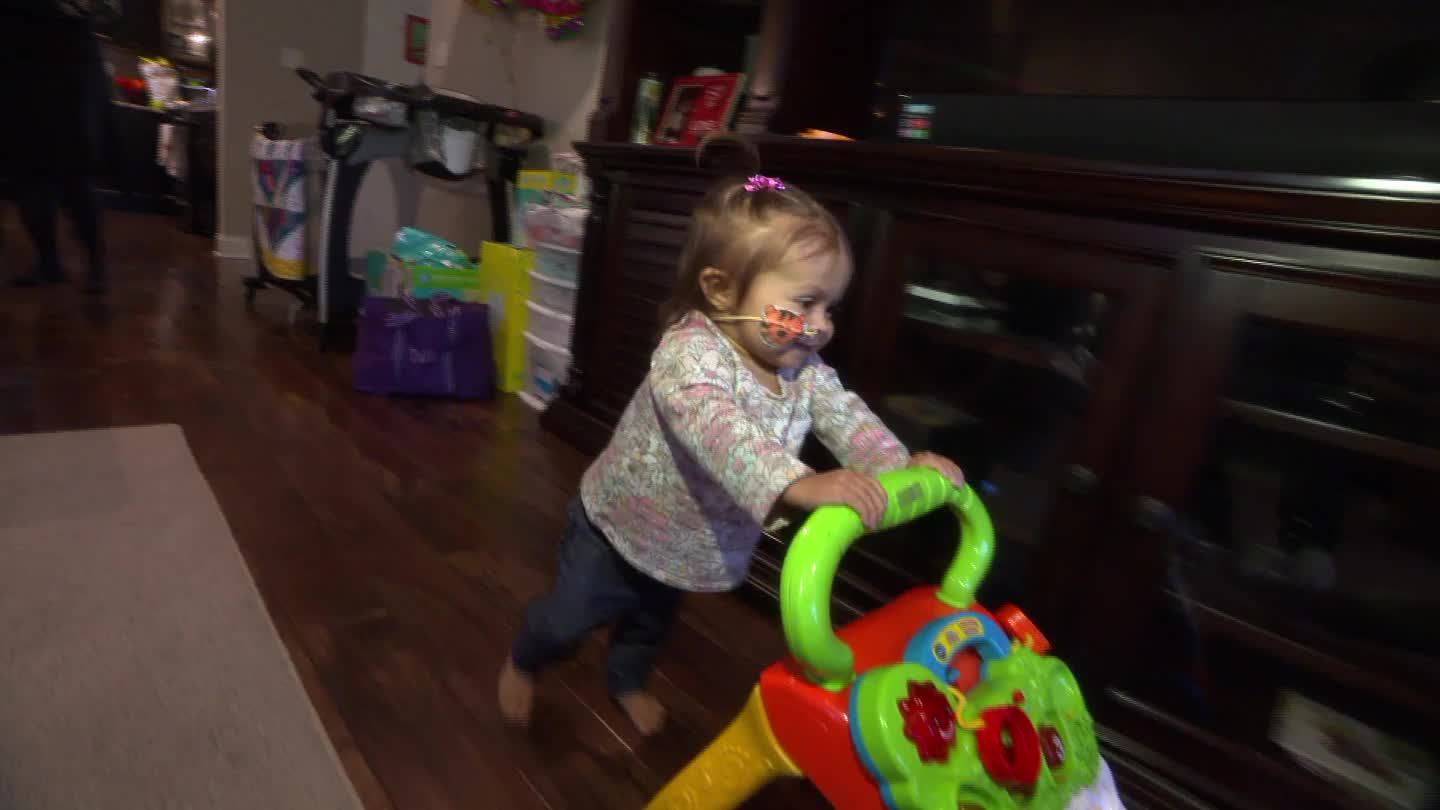 PIX11 News exclusively shares the story of a NJ nanny who sacrificed herself to help the little girl she babysat for when she needed a new liver.

Talia Rosko loves to laugh, to play and to cuddle up with her favorite blanket.

“She would go down for a nap and wake up with a smile," Kiersten Miles, Talia's babysitter, described.

This 16-month-old from Jackson, New Jersey shares quite the special bond with her babysitter.

“She’s like such a happy baby you really wouldn’t have known that anything was wrong with her," she said.

Kiersten Miles first met the Rosko family last June after a friend recommended her as a summer nanny.

“Ever since I started they have just welcomed me with open arms," Kiersten explained. "They’re outgoing and they’re just awesome.”

The then 21-year-old knew one of the three children would require a little extra attention.

“We brought [Talia] to her two-month well check up and our pediatrician right away said her eyes were off," George Rosko, Talia's father, remembered. “She said we have to go see a specialist immediately.”

George and Farra remember taking their baby girl for an ultrasound and biopsy which ultimately showed her liver was completely obliterated.

“I was paralyzed," Farra said. "The doctors said we think it’s biliary atresia.”

The rare disease occurs when the liver’s ducts become blocked, creating a build-up of bile, quickly destroying cells and causing substantial scarring. Doctors told them they needed to schedule a Kasai, a procedure that involves removing the blocked bile ducts and gallbladder and replacing them with a segment of the child's own small intestine.

“The Kasai was hopefully a procedure that would prolong her need for a transplant," George said. "It’s just kind of a band-aid,” Farra added.

Talia also went on the transplant list. Around that same time, Kiersten came into their lives.

“I was with her a lot and I got attached to her and I just became curious to the condition so i did some research,” Kiersten explained,

After only knowing the family for three weeks, the college student decided, all on her own, she wanted to help, by donating part of her liver.

“I was like Kiersten this is not like donating blood, this is serious you need to talk to your parents," Farra said. "[I told her] you need to research this and she’s like already did. She was like I’m compatible.”

They rarely talked about it after that, only when Kiersten had an update.

“I didn’t want her to feel any sort of pressure at all from me at all," Farra explained.

Then on January 11, after six months of testing, paperwork and some minor nerves, it was time for surgery. Both operations went smoothly and successfully.

“The first and second day of recovery were probably the worst,” Kiersten described. "It was kind of just uncomfortable.”

“[Talia] bounced back like no tomorrow," George smiled. "I call her my rock star because she went through so much and she’s stronger.”

Talia was discharged after only nine days, the average is 14. She and Kiersten have scars that will fade and a few follow up appointments, but say, overall, they’re doing really well.

“There are no words that are good enough for what she’s done for us and it was just out of the goodness of her heart,” Farra said.

“I think it was definitely meant to be and I think the whole experience made me a better person,” Kiersten said humbly. "It’s changed my outlook on my whole life.”

Most of all, Kiersten hopes it will change other people’s minds about becoming an organ donor, something New Jersey and New York desperately need. New York ranks 50th out of 50 states with regard to the percentage of residents registered as organ donors and New Jersey ranks 44th.

"Yeah it’s a few months of recovery but it’s definitely worth it," Kiersten pleaded.

Kiersten says she will never be able to donate part of of her liver again, as they take out a vital vein. But that never bothered her because she said "I can't imagine something happen and me not doing anything to help."

For more information on becoming an organ donor or to register, visit https://www.organdonor.gov/register.html