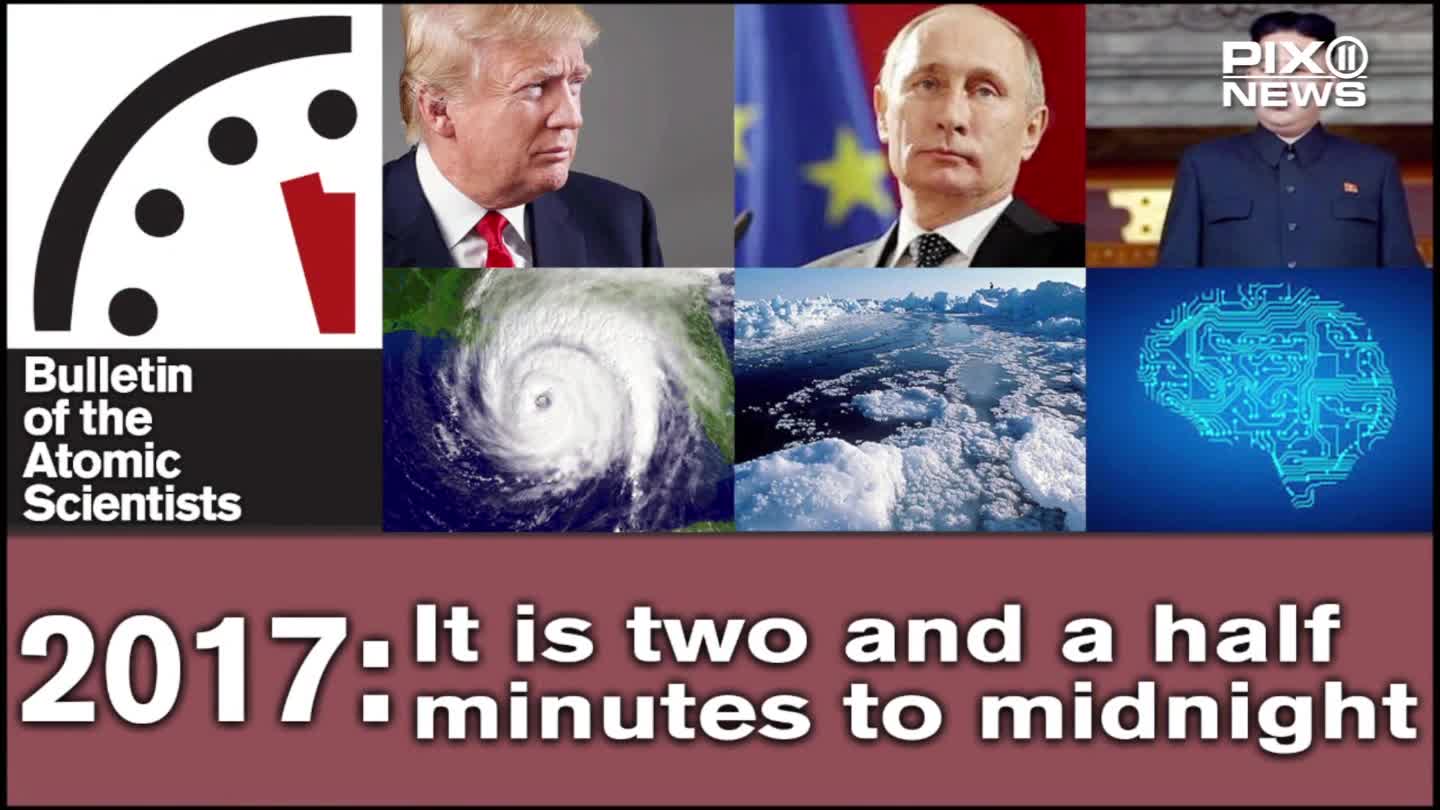 Humanity is edging closer to annihilation than it's been in decades, according to scientists.

Humanity is edging closer to annihilation than it's been in decades.

A Chicago-based group of scientists tasked with assessing how close the apocalypse is announced on Thursday that the events of 2016 have moved the hands on the "Doomsday Clock."

That 30-second move toward midnight puts 2016 on par with 1953, after the first hydrogen bomb tests in the U.S. and then-Soviet Union. This is the closest the clock has been to midnight since the early 1980s, scientists said.

The clock is "closer to midnight than it's ever been in the lifetime of anyone in this room," Lawrence M. Krauss told those attending a news conference Thursday revealing the scientists' decision.

In a statement released earlier this week, the Bulletin of Atomic Scientists said it took a number of recent developments into account when moving the clock head.

"A rise in strident nationalism worldwide, President Donald Trump's comments on nuclear arms and climate issues, a darkening global security landscape that is colored by increasingly sophisticated technology, and a growing disregard for scientific expertise," were among them, it said.

Krauss, a theoretical physicist and cosmologist, called out Trump and Russian President Vladimir Putin as world leaders who must reduce this "existential risk."

"Trump and Putin can chose to act as statesmen or as petulant children risking our future," he said.

Fellow boardmember David Titley, director of Pennsylvania State University's Center for Solutions to Weather and Climate Risk, said a combination of "loose talk about very dangerous weapons" and a "blatant" rejection of scientific facts played a role in their decision.

A team of Nobel laureates at the Bulletin of Atomic Scientists has been compiling research and analysis to set the "Doomsday Clock" since 1945.

The independent nonprofit group uses data to assess global threats linked to treaty negotiations, geopolitical tensions and developments in the world of technology.

In 1963, scientists moved the clock back to 12 minutes from seven minutes after U.S. and Soviet leaders signed the Partial Test Ban Treaty, ending all atmospheric nuclear testing.

The hand reverted to seven minutes from midnight in 1968 as France and China joined the nuclear arms race, and the US became more involved in the Vietnam War.

However, the pressure eased -- and the clock ticked back -- with the signing of the nuclear non-proliferation treaty in 1970.

In subsequent years it has swung back and forth -- landing at an alarming three minutes to midnight in 1984 when U.S.-Soviet relations reached a new low -- before swinging back to 17 minutes from midnight in 1991 after the end of the Cold War.

Since then, it's ticked ever closer to midnight.

While geopolitical factors feature heavily in this year's evaluation, emerging risks posed by new technologies have also been flagged for the damage they might reap if they fall into the wrong hands.

These include the rise of artificial intelligence and security threats, including the potential misuse of biotechnology.

Developments in this industry -- which enables humans to synthesize organisms from scratch -- come with a risk that bio-terrorists will make weapons out of synthetic viruses.

This would widen an already diverse arsenal of weaponry that threatens to end the world.